Last week I was asked to repair a Cinequad, Diatone Taycan. When I came to test fly it I was quite enamored by how nice and stable it was to fly slowly around my property. The noise however was not all that well received by the natives.

So rather than go for a full sized cine-quad I was wondering if anyone had experience of smaller less noisy alternatives and could share some recommendations?

@Howard78 is this like your new little toy ;o)

How to miss the opportunity to fly at my sister in law wedding? [Fabio e Arianna - 14 Ottobre 2021]

I use mine with an insta360 go 2 but they can be used with an SMO 4K, Gopro6 lite and Gopro8 Lite instead.

I’m still getting used to mine so have limited footage to share as the maiden flight outside was only yesterday.
First impressions, its loud but less loud in comparison to other cinewhoops - it’s agile and has a good amount of power.

Agree, it’s a bit loud as it has to carry additional weight… so props have to spin faster.
My advice is to buy a set of 5 blades props for comparison (I went for the yellow ones): 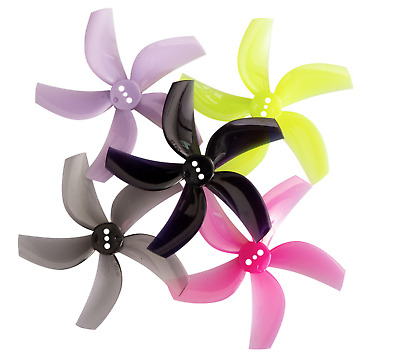 Gemfan has been killing it with the props.  They have produced this prop the D63 as a legitimate prop for 2.5 ducted cinewhoops These are the props for your 2.5 ducted whoop like the iFlight Proteck25 Cheek out the full selection of Gemfan...

I’ve also been looking at stuff like this. I was wondering about the new MK2 version, which has different ducts… it’s those that make the noise.
I suspect the default ducts may still be noisy, the holes making a whistling sound. But you get an alternate “closed” set in the package… 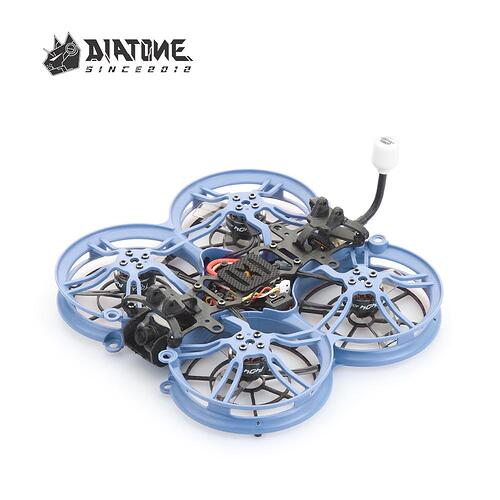 The other one I’ve heard good things about is the GEPRC Cinelog 25. 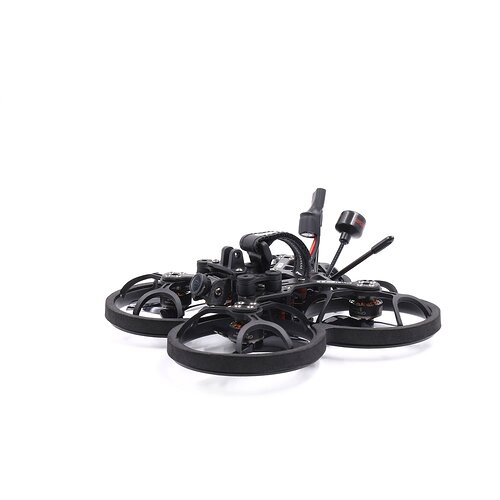 Nick Burns has reviews of both and many other small drones…
https://www.youtube.com/c/NickBurnsRC

Good shout. I also have just received some of the 5 blade props.

Thank you, everyone, for the replies and great info.

The first thing I’m taking away from this is I don’t have a clue as to what I’m talking about. Now I know that all Cinewhoops are Cinequads, but not all Cinequads are Cinewhoops.

The Diatone Taycan is back on my bench again. After I gave it back to the owner he wanted to install the LED ducts, and in doing so he shorted out the 5Volt and 9Volt lines on the MambaF405Mk2 flight controller. He wired the LED signal wire to the 5Volt rail, and the VCC wire to a NC pad. I’ve managed to resurrect the 9Volt and 5Volt rails but I fear he may have permanently damaged the BF LED signal line, as no matter what I do I just can’t get the LED’s to light even though the regulator board for the LED’s is outputting 5Volt.

Anywho, back to the original topic.

The subject of the 5blade props. When he first dropped the Cinewhoop off for me to fix (he’d wired up the receiver arse about face) it didn’t have any props on. Once I fixed his dodgy wiring and cleaned up the rest of his soldering I test flew it first on 4Blade props. It flew OK but lacked precision. Installing 5Blade props transformed it and I thought the precision was now near surgical. I wouldn’t say the noise generated by these props was quieter but it was more pleasant in a tonal kind of way.

Currently the choice of Cinewhoops is a little limited, as is the choice of all FPV quads types in general, due to the current semi-conductor shortage. I’ve also noticed a price increase in most flight controllers and ESC packages, no doubt related to component shortages. On the upside I may end up inheriting this Taycan as it’s owner can’t fly quads, even though he has quite a few (I’ve repaired those for him also).

Isn’t it always the way? I start thinking I have enough drones then find a reason to add to the collection. Cinewhoop? Why the hell not?

I wouldn’t say the noise generated by these props was quieter but it was more pleasant in a tonal kind of way.

Less of a high pitch whine?

Less of a high pitch whine?

So the frequencies generated by a 4Blade prop in a duct sound disconnected, but those created by a 5blade prop are more harmonious. It’s either that or my medication is twisting my melon again.

Nidge, Is there anything you don’t know

I just found this… 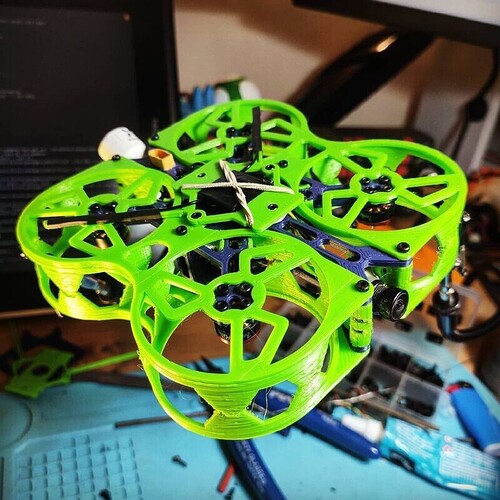 The immortal cinewhoop frame. Free for all!...or join team Vlamole.Studio to be first in line for upgrades and new designs.

Looking in my bits box I found that I have everything needed to make it except a stack.

So… I’ve bought one of these: 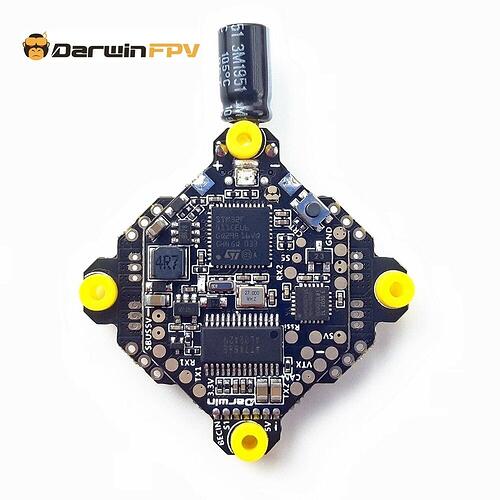 I was concerned about the low amperage, but I just checked and my original 2" 3d printed drone has a 6A ESC… 6A! That’s nothing… it’s been working fine as well! In fact it flies great!

Nidge, Is there anything you don’t know

There are days I can’t find my car keys. But that’s because they’re in my pants, which I often forget also.

I start thinking I have enough drones then find a reason to add to the collection. Cinewhoop? Why the hell not?

That was exactly my thought process. I’ve rationalised my numerous fpv drones by telling myself each one has a different use - speed, freestyle, cinematic, long-range and small spaces

Well, it sounded right in my head anyway!

Interesting about the 5 blade props. I’m going to change mine over later today and listen for the difference

I should’ve recruited you for the ‘Gibbet’ project.

I have a BetaFPV 95X (v3) with 5 blade props. I agree, it’s a nice thing to fly and I can slowly potter around through tightly packed trees and other tight gaps quite happily. It is bonkers loud though. I think the ducts contribute to the noise, more than the prop configuration.

Mine runs 4S and comes can just about carry my ‘Runcam 5 Orange’, but requires a noticeable amount more throttle (and noise) to do so. It’s more designed for the lightweight naked GoPro/SMO 4k/Insta 360 type thing. If I was buying again I’d look at something a touch bigger with a bit more grunt. It’s kind of pointless flying it without a decent HD cam on there since the whole idea of it is that it can capture lovely smooth cinematic type footage.

Thank you for the info. I’ve just finished repairing (again) the Diatone Taycan that belongs to one of the members of my flying club and had a quick test fly around my property, and to be honest I’m now beginning to think that the noise isn’t too bad. I did notice it didn’t like sudden surprise breezes though.

It’s kind of pointless flying it without a decent HD cam on there since the whole idea of it is that it can capture lovely smooth cinematic type footage.

I’m more about the flight experience than the video results. Whatever video it produces would only be of interest to me, unless I was able to capture Aiden Turner (Poldark) then my wife might take a peek. That and my upload speed to Youtube is less than 600kb/s so any reasonable short HD video would take an ice age to upload.

Have you seen the happymodel cine8? Also sold by unmannedtech as the C2 Cineflea, 2 inch ducted, runs on 3S and is £85. I have one and that runs a insta360 although it will run a naked GoPro.
If you just want to dip your toe in, you can’t go wrong for the price.

The duct scream is a thing but I tend to fly it indoor or well away from people exploring tree canopies. Wind is not your friend!

Thank you for the suggestion.

This little thing appears to tick the boxes I was wanting, small and relatively cheap, so as I had some other items in my UMT basket it’s been ordered.