Easiest one first — The GVC is unaffected by the latest changes. How near you can fly to non-involved individuals will depend on the Operation Manual you will have to submit to the CAA for the Operational Approval you will need to go with the GVC.

Have a look at GADC’s own guide on where you can legally fly Good 2Go here – Where can I fly my drone in the UK? - Good 2 Go - Can I fly my drone here?
Try inputing different combinations and it will give you a good idea of what qualifications you are going to need to get the best out of the M3 M3E combination.

Now I have to decide whether or not to hold onto my M3 or not, for future high end photography. I just don’t think the M3E has enough of a resolution and quality, max is only 4k 30fps…

The M3E runs on different software to the M3 where a lot the photography/videography options are stripped away as it is intended for enterprise functions - mapping etc.

re XIMI … It definitely is, isn’t it. 100%.
why anybody actually believed any of it would work is hard to understand.

One of me very close family members until recently worked for the DFT…
The only comments ever made were reference visiting over promoted politicians and their behavior.

Every morning i look out the window for the governments promised land of freedom, opportunity and sunny uplands with their oven ready deal… all i ever see is rain and … never mind no point wasting energy…

A lot of people are hating on the CAA over the whole C”n" marking debacle but I think they are not the instigators but rather have been tasked as the messengers.

There is currently a very similar cock-up with the CE to UKCA certification process transition. Manufacturers have now been told that they can continue to use CE markings until 31st December 2024 if selling to the UK. All in the name of sovereignty, whatever that means, and other meaningless reasons.

Like most things BREXIT themed these two certification processes have not been thoroughly thought through by the Government, assuming anyone tasked with theses transitions actually had any meaningful and productive thoughts in the first place.

A likely outcome of this is that no drones will ever be certified for use in the A categories in the UK if another BREXIT specific classification is used, as why would a manufacturer go through the cost of a separate certification process for such a small market?

I spoke with one European electronics manufacturer whom stated that they would not be supplying the UK with one of their latest products as it would mean selling at a significant loss if they were to apply for a UKCA stamp. This was before the announcement that the CE label would be extended to 2025.

If you want to direct your anger at someone may I suggest the Second Permanent Secretary, Gareth Davies, as he will most likely be the one who came up with this as he got very moist about BREXIT in the first place.

Hi, I’m new to this community and I’m looking for some advice.

I’ve been flying my DJI Mavic Mini since 2020 (since the first lockdown) and have recently decided to take it a bit more seriously as I’ve been thinking of starting a small business in early 2023, starting with real estate.

I ordered a Mavic 3 Classic last week (arrived today) as I was under the impression that it was marked as a C1 UA but having watched a few videos online over the past few days, that doesn’t appear to be the case – I’ll be honest I’m pretty confused over the whole situation.

To make things worse (or not) I just dropped 100 quid on UAVHub for the A2 C of C training!

Considering my use case; is it even worth pursuing the A2 C of C (I’ve spent the money, so I’ll take it regardless)? Should I keep the M3C classic if I want to start a small business in the new year?

Starting to think I should have just gone with the Mavic 3 mini pro to avoid the hassle XD.

GADC is non political… but it is impossible to give any constructive non political comment as the whole situation is caused buy politicians making political decisions.

Odd really, they were very good at parties and drinks while people clapped …, yet it’s easy to see why some think they would struggle organising an alcohol festival in a brewery… 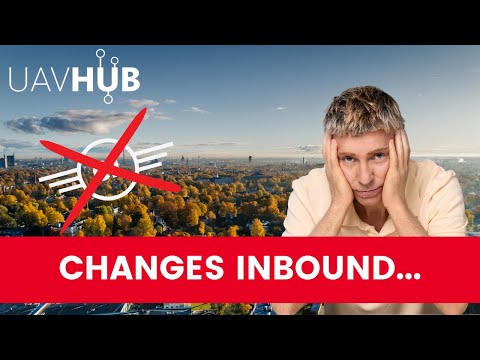