I have searched for this but struggling to find answers in here. Ive tried watching videos online but its very frustrating when I get a max of 3.7mb speeds at home (on a good day). Im trying to put together a hyperlapse with 186 photos. I have used the dji software but it keeps jumbling up the frames so I thought I’d give davinci a go. The few videos I have managed to watch have completely different panels open and being a dullard with anything more than ms paint I’m struggling. So, in your normal video editing workflow, what side panels are most useful to have open? What is your workflow for editing video? And finally, what is your workflow for making a hyperlapse? Please don’t point me to videos on tinterweb, its just too difficult.

I don’t mind reading text tutorials with pictures if there are any?

I can’t help with your specific question, as my workflow is different to some and I tend to use the Cut page most, whereas I get the feeling that most other people prefer the Edit page. I have a speed editor controller and it works bets in the Cut page.

However, for general DaVinci Resolve help and “training”, I’ve found Casey Faris on Youtube really usefull, and he creates videos that are often specific to the latest version of DaVinci, as things do change a little between the different versions of it.

One last point that I’ve found, try not to worry too much about what panels are “useful” to keep open, different panels do different things and what you need to have open depends a whole lot on what you do with it. They are easy to open and close as you need them, so focus on building a workflow that focuses on the results rather than on the tools, and bring up the tools as required. And definitely try to work with 2 monitors where you can…

Im trying to put together a hyperlapse with 186 photos

Please don’t point me to videos on tinterweb, its just too difficult.

I don’t mind reading text tutorials with pictures if there are any?

My bad for pointing to YT, but this is unfortunately not something that you can easily learn from reading and pics…

Windose.
Yeah the end length is what I figured. I used the 2sec time function on mini2, hoping that if I got things right I’d have a 5:1 compression ratio? 186 images at 2sec intervals = 372 seconds, flight took a little over 6 minutes. Or am I totally wrong and have to do it again ?

My bad for pointing to YT, but this is unfortunately not something that you can easily learn from reading and pics…

I’m not fussed if it’s difficult, it’s almost impossible for me on you tube

Or am I totally wrong and have to do it again ?

The ‘video’ you are going to make is going to be 25 frames per second (optimum) and you have 186 frames to play with, divide the 2 up and you get 7.5 seconds ish

Thinking out side the box time, can you download the DJI Mimo app used by the pocket series cameras (the Pockets sre basically the Mini 2 cameras anyway), and load your pictures into that? The Pockets do a pretty good job of hyperlapses and other time delay shots.
It’s a free app, so you’ll lose nothing if it doesn’t work.

Cheers, I’ll give it a try.

Also, are there any price deals on Studio we know about?

I’m certain it will read them OK - but probably restricted from rendering 10bit.

Somewhere on their site there’s a comparison of features.

Never seen a deal for Studio - except the Speed Editor keyboard deal I took advantage of. 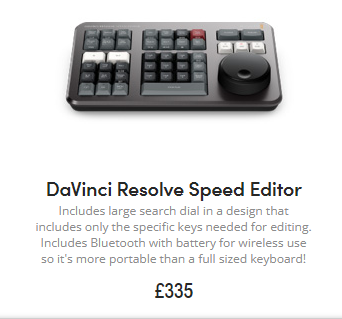 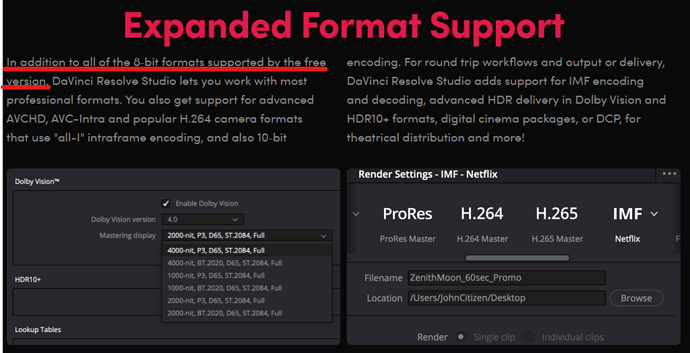 As above - no 10bit rendering - but it reads and uses the 10bit data to full advantage.

Then I may have been incorrect about the free version ingesting 10bit. Could have sworn I managed that before I bought studio.

Perhaps they introduced this separation with 18.

Moved todays posts to this thread, since the other is more for updates.

In which case, Steve, you could always try by uninstalling 18 and installing 17.

DaVinci Resolve 17 is a free professional-quality video editor that offers all the state-of-the-art features and tools including photo, video, animation, and visual effects editing as well as audio and video post-production. DaVinci is for users...