I received a couple of sets of the Master Airscrew props for the DJI FPV Drone yesterday. I haven’t had the opportunity to test them yet due to a medical appointment today, but I can describe some of the differences.

First off is the stiffness (Ooh Mrs). Where as the DJI props have the rigidity of a wet noodle the MA props feel significantly more substantial. They’re also made from polycarbonate as opposed to the vending machine coffee cup the DJI props are made from.

Secondly they are slightly longer and more aggressive in pitch. The DJI props are 53x28 and the MA props are 54x32. I doubt they will increase flight times but they will produce more thrust when needed, such as in sharp turns where on the standard props the drone tends to corner like a duck on ice. This is further emphasised by the broader surface area at the mid point of the blade.

Anyway here are some pics to show what I’m trying to say.

If it’s not clear I’ve stacked the two props on top of each other to show the size difference in the last picture.

Thanks for the mini-review of these.
I’d be keen to get your thoughts once you have flown with them.

I’ve had the prop adapters and had been about to fit them but have seen so many videos about crashes where they have been a factor in flying in acro, I’d decided to wait until these were available.

I’ve had the prop adapters and had been about to fit them but have seen so many videos about crashes where they have been a factor in flying in acro, I’d decided to wait until these were available

I’d be interested in seeing the vids. I just did a quick YT search but only came across one fail, and a possible fail.

With the one fail it was obvious from the start that the uploaded had broken the prop when fitting. He started the motors and one prop was oscillating badly. When he increased the throttle one of the blades broke off.

Second video the guy was demonstrating how to fit the adaptors and props, but he put the props on arse about face. He didn’t show it flying in this config so I guess he realised his mistake off camera.

I’ve only once had a prop fail on a FPV quad, and that was when I wound the throttle up full on my 6inch quad on 6s and the prop exploded. In hindsight it was my fault as the prop was likely damaged prior to the flight from an earlier unscheduled landing.

I saw the video when he uploaded it, and I was pleased he added the caveat at the end about flying in normal and sport mode. I’ve seen some comments from other users whom complained they didn’t do anything different, then find they don’t fly in ACRO mode.

My main hope is that they’ll improve the response of the quad so as not to feel as much like a pre-2015 ZMR clone on a Naze V1 board.

So this was one. Initially the guy thought it was a software issue but you can hear the props. 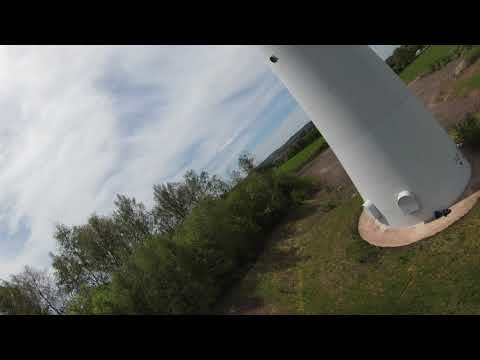 The comments make for interesting reading

It may not be at all relevant to this discussion, but a few years ago I spent sometime testing MAS props on my Mavic Pro One. I found no advantage in them at all and decided to stick with the DJI Low-Noise version which were the best performer.

Interesting video, though I feel there’s something the uploader wasn’t sharing. As for the props I think they were just cheap aftermarket clones of the DJI prop and nothing to do with Aikon prop adaptors.

Comments always give me a chuckle. The one that caught my eye was the one where the guy was claiming the flight controller had got swamped by runaway resonance. I’m aware of runaway resonance with respect to driven harmonic oscillators, but this is the first time I’ve heard it used as to why a quad ended upside down.

testing MAS props on my Mavic Pro One. I found no advantage in them

I’ve used MAS props on fixed wings as well as my 3DR Solo’s. The most noticeable thing about their fixed wing props is that they need very little if any balancing at all, compared to say your garden variety APC type props which I’ve always had to balance. On the 3DR Solo’s and Isis quads I have the main, and probably only difference, is the tone compared to the ones originally supplied by 3DR. A slightly lower and less shrill noise, and possibly the quads are little more resilient in windy(ish) conditions.

Generally I don’t think there’s much performance to be had between props on drones whom flight characteristics are predominantly dictated by the flight controller as opposed to the flying style of the pilot, like the majority of camera ships where the GPS onboard governs most things.

I’ve done my first very unscientific test of the MAS props. As I’m still not fit to travel away from the house this was just a preliminary test to compare the noise difference if any with a few punch outs in my driveway. Answer: None that I could decern.

However I did see that on take-off in Normal mode I immediately saw a prop-guard warning message in the goggles, followed by the notice that the performance would be reduced. I can only assume that because the props are slightly longer than the OEM ones they are being detected by the forward facing obstacle avoidance sensors, as I didn’t see the message when I armed and took off in ACRO mode, whereby the OA feature is disabled.

So the Question do I stick with OEM or get the Master Air Screws ?>

If you’re flying manual @Howard78 swears by them.

No difference otherwise, although they do sound nice

Haven’t flown manual I’ve already smashed it up. However I have an Avata which I’m prepared to attempt manual flying & a V2 controller. Go on dare me Double dare me I’ll do it

If you only intend to fly in Normal and Sport mode I’d stick with the OEM props. If you fly with performance props in Normal and Sport mode the flight controller will still dictate ascent and descent speeds, as well as forward speed. In ACRO mode I found the MAS props made the quad feel more responsive and dialled in, especially in sharp turns where the OEM props would washout and I’d overshoot the same turns.

I’m inclined to agree with you on this OEM is the way to go. As intended by the manufacturer !