Mate of mine just sent me this. Guess they got him under Article 240. Perhaps the drone code should include a mention of Notams. May have saved this from happening.

A drone pilot who nearly caused a serious accident at a memorial flight in Buxton has pleaded guilty to endangering an aircraft.

The incident happened at the Buxton Carnival in July 2022, during a fly-past by the RAF’s Battle of Britain Memorial Flight Hurricane.

At the time, the fly-past had been protected by a short-term airspace restriction which banned all other flying in the area, including drones.

Images captured on the day showed the drone flying dangerously close to the wing of the Hurricane, which was being watched by an estimated 20,000 people.

Officers worked to identify the drone operator, a 49-year-old man from Buxton, and his drone was seized as part of their investigation. Analysis showed it was flying over Buxton at the time of the fly-past.

Mark Bagguley, of Chatsworth Road, Fairfield, was arrested and subsequently charged with endangering an aircraft and operating an aircraft out of the visual line of sight.

He pleaded guilty to both charges before magistrates at Chesterfield Justice Centre today (Monday 9 January) and is set to appear again in February for sentencing.

Following the case today, which may be one of the first of its kind, the Civil Aviation Authority and police are reminding drone operators of the need to fly safely and legally.

“Anyone using a drone must follow the rules to make sure they fly safely. As a police drone unit, we know the benefits drones can bring to society but people using a drone in this way not only threaten the safety of aircraft and the public they also damage the future use of drones.

“This is for the safety of not only yourself but others around.”

Drones must be flown safely and legally, within the limits of the operating category they are flying in.

This includes operator registration, pilot competency and maintaining separation distances from members of the public, built up areas and manned aviation. All drone operators are responsible for ensuring the drone is being flown safely and within the law at all times.

Those found to be committing offences using drones will be investigated and could face prosecution.

More information can be found at register-drones.caa.co.uk/drone-code.

Perhaps the drone code should include a mention of Notams 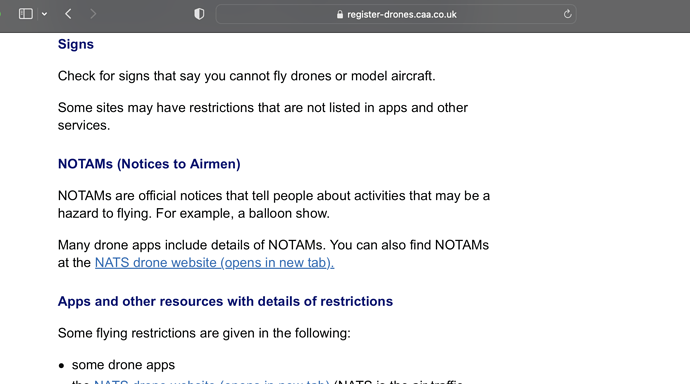 This is why I check the Drone Safety Map (Altitude Angel) before going to fly. It has the NOTAMS there for sure. I do look at Drone Scene as well.

This is why I check the Drone Safety Map (Altitude Angel) before going to fly. It has the NOTAMS there for sure. I do look at Drone Scene as well.

One and the same, but drone scene has far superior tools as well as much more information over Altitude Angel

NotamInfo is afree app that can be set to send you regular Notam updates any area you choose.

NotamInfo is afree app that can be set to send you regular Notam updates any area you choose.

Do you have a link?

Let’s hope that this makes people think about their responsibilities before simply taking to the skies.

Ignorance of the rules is not a defense.

The consequences of this guy’s actions don’t bear thinking about with 20000 spectators watching.
The consequences for our hobby could have been even more restricting too.

Yes the guy is a lunatic who deserves the book flown at him but the interesting line there is he’s charged with “Operating an aircraft outside the visual line of sight”.

First time ive seen that specific charge applied to someone (and by nature of the plea, proven in court).

Its not an app, its just a website:-
https://notaminfo.com/

But you’ll get the same drone related NOTAMs and FRZs from Altitude Angel website or DA or DS etc.

Not an app as such. It just opens in a browser.
Notaminfo.com
Need to sign up and then set it up.

I wonder if the authorities will use this by means of coming down heavy, as an example too others

I wonder how close, “ dangerously close” to the wing of the Hurricane “ actually was ? For all we know, it could have been 1000ft away ( no excuse for flying though) Just making the point though

Or you could argue that the system works in that it catches idiots and convicts.

Anywhere inside the restriction zone is defined as dangerously close, hence the zone.
Ultimately 20,000 people and fast moving aircraft unable to comply with the rules of the air need a big bubble of protection around them.

Anywhere inside the restriction zone is defined as dangerously close

Link to this “definition”?

Yeah I get that, obviously not been sentenced yet, question is anyone’s guess as well, I wonder how hard they’ll come down meaning, fine, un payed work or worser still prison.

gnirt, how large is the usual exclusion zone for such an event ? Where the flight path/ plan is actually known ?

Depends on the event and what’s flying.

Big events like RIAT have the display area plus a few holding areas declared.
Other smaller shows are often just a circular area of 3-5nm or whatever. Fast jets and formation displays need a larger area than a few slower props doing flybys.
Generally assumed that the a/c inside are unable to comply with the standard rules of the air and as such anywhere inside it is potentially dangerous.