Droning for a living

Lovely views coming in but I need to earn a living so my stuff is all about buildings, sorry if this is boring and without rolling hills or lakes. It pays the bills though! 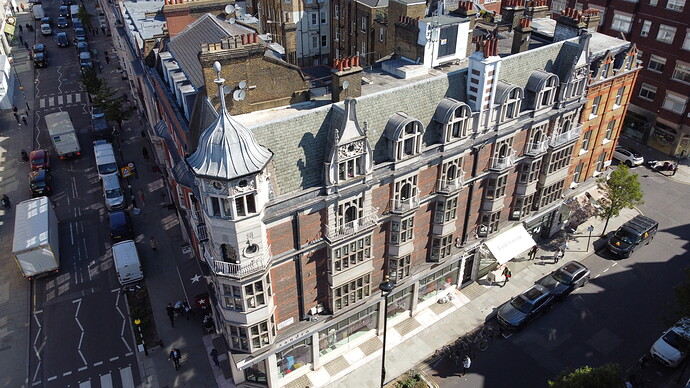 Was permission easy sought in that there London Town ?

We like building photographs as well on here, in fact anything to do with drones so don’t be put off sharing

Not easy but nowhere near impossible. You apply to NATS with your life story and licence details, drone details, blah, blah and they promise to get back to you within 21 days. My drone being under 250g helps a lot. You give them a span of dates and they consider it. The last event was marred by lots of “police action” so they cut my period down a lot. Have not been outright refused yet in 2 years. I mainly work in Central London so I expect some polava, goes with the territory…

Cool, its alwatys good to get feed back for those that can’t be arsed even trying for permissions.

That would be telling!! This wasn’t a “one-shot” jobbie. This job involved hundreds and hundreds of shots as the client wanted a 3D model as well as a fly-over and a whole bunch of stills. It was in the four figures shall we say.
I have some REALLY boring industrial shots to share at a later date - you asked for it!

Thanks for the positive response, much obliged.

I could not risk being hung, drawn and quartered by the CAA as this is my living. I fully respect the laws. It is a privilege to have a drone licence.
We even had the police turn up on a job last year and we had NATS approval, buildings owner’s approval and all the tenants had been notified. That was a WOW moment. The police were only doing their job.

Cool, its alwatys good to get feed back for those that can’t be arsed even trying for permissions.

It’s not too difficult just takes a bit of time

I had that happen before as well, I now get a CAD number from the police

Yes we had that. The cops must have decided they had nothing better to do on that particular day. It was all dealt with amicably so we had our 15 mins of “fame”.

Was it just 15 mins of checking and on their way then or did they hold you up more substantially?

I would say about 15 mins. They were polite and just reacting to some egyt who thought we were intruding or whatever. We have done quite a few projects in the location and this was the only time the “flying squad” came out.