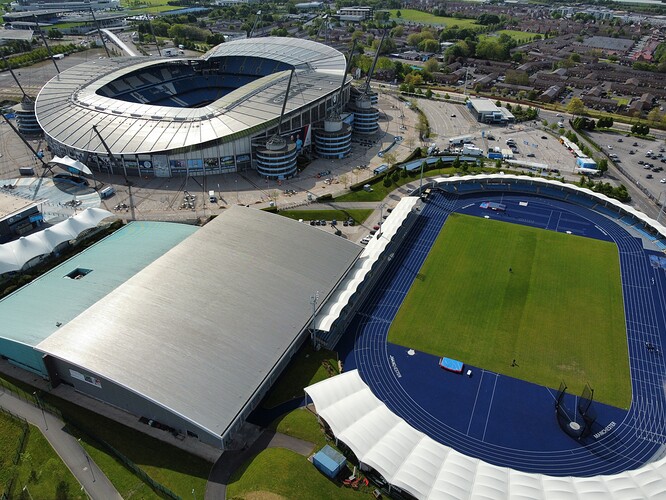 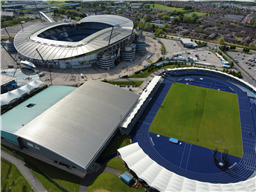 This location has been recommended to fly your drone in the Modern Buildings category in the North West region.

This was a good place to photograph the canal, tramway and several nearby sports grounds including MCFC Etihad Stadium.

My take-off-and-land spot was on the south side of Ashton Canal as shown by the marker. This can be reached via a small footbridge from the towpath on the north side of the Canal.

I parked on Stuart Street, M11 4DQ, and followed the towpath from opposite the entrance to Philips Park. On a Sunday morning it was fairly quiet, although this was possibly largely because the canal towpath was blocked for construction work and there may be more people around when this is reopened.

Accessibility: Straightforward paths with no steps although some steep sections of path. Probably unsuitable for wheelchairs.

Hazards: I was there in May, and geese on the canal were a hazard (protective of goslings at this time of year!) There are pedestrians using the canal, and a tramway and other footpaths close by. There is the possibility of security staff from one of the nearby sports sites taking an interest, so if concerned, it may be worth notifying police of your plans in advance.

DJI drones: This location is within a DJI authorisation zone, this needs to be unlocked in advance using the DJI Fly Safe Self Unlocking website.

The originator declared that this location was not inside a Flight Restriction Zone at the time of being flown on 23/05/2021. It remains the responsibility of any pilot to check for any changes before flying at the same location.

some football stadium or other.

Home of the Champions

Home of the Champions

What a waste of council tax

Ahh well, suppose they won’t miss what they’ve never had