The other day I went to fly. The weather was mainly dry and sunny but just when I was ready to launch it started to drizzle. I know these drones are not waterproof in any way and so we shouldn’t get them wet but it was very light drizzle. Fly or not fly?

In the end I waited. It was clearly just a shower and it didn’t amount to much but it got me thinking… can we fly if there is a bit of drizzle in the air? How much is too much?

I had the same Saturday morning whilst trying to photo the church in a FRZ, I waited for a gap, wouldn’t risk flying in the rain in case it caused any problems, water getting into the electrics and causing a crash or loss of control would be my main concern.

I’ve flown in wet conditions several times, sometimes unplanned, once just to test. Above low cloud usually ends up with quite a bit of moisture. But mainly it has been most, drizzle or rain. The motors are brushless, and the the same that are used in submersibles, therefore rain is fine. That said, the main drone internal electrics are not fine with water ingress. I’ve taped up the battery gap and SD card slot, and never had an issue. Obviously, still a risk though.

I know these drones are not waterproof in any way and so we shouldn’t get them wet but it was very light drizzle. Fly or not fly?

I think the majority of flyers have been caught out and brought it back wet, be it drizzle, dew or clouds ;o)

Would I set off in the rain, no.

As @clinkadink said - the motors most likely to get wet - but electrically no issue - and sealed bearings will have no issue.

Remember - rain/drizzle has a very low electrolytic properties, so chances of shorting anything relatively low. Likewise, residual deposits after it has evaporated exceedingly low - hence no long-term issues.

Also - as @clinkadink said - if it’s rain or significant drizzle - and for a longer flight than a quick up/photo/down flight, tape over upper body joints.

The bigger question with drizzle/rain - is there anything worth photographing/videoing? Probably not.

At least getting above fog can provide some great images.

Not “recommending” it. But, if there’s a need, a short flight in light rain / drizzle / fog won’t be a very brief flight to disaster.

If it’s more than the very mildest bit of spit, probably unwise to fly in it. Even then you have to consider whether that’s likely to develop to worse rain during the flight.

Even drones rated for having ingress protection aren’t “waterproof”, they’re just more resistant to getting water inside. The internals and battery won’t like water very much.

Thanks for all the great replies… very helpful.

I think it is something we all make our own minds up on… for me I have decided not to deliberately fly in anything more than the very lightest of fine drizzle and even then only if I can be pretty certain that it won’t get much worse. Mist… may be if the shot looks worth it

Mist… may be if the shot looks worth it

There’s guidance for flying in mist/fog conditions as part of an A2 CofC course.

Essentially, make a test flight in the fog for a minute or two, land, assess the accumulation of moisture and decide whether to make a more serious/long duration flight based on that.

IIRC someone on Youtube had an issue with icing

Icing can start forming about +4C on props. They change the pressure around the blades as they spin and thus the freezing point of water.

Not to fly unfortunately. Theyre water resistant to an extent but precipitation is the worst thing for the electronics. Put it in the hanger and wait another day

so this is for you

Find out what to do before flying a drone or model aircraft and what to watch out for during a flight. Make sure you and your unmanned aircraft are fit to fly. 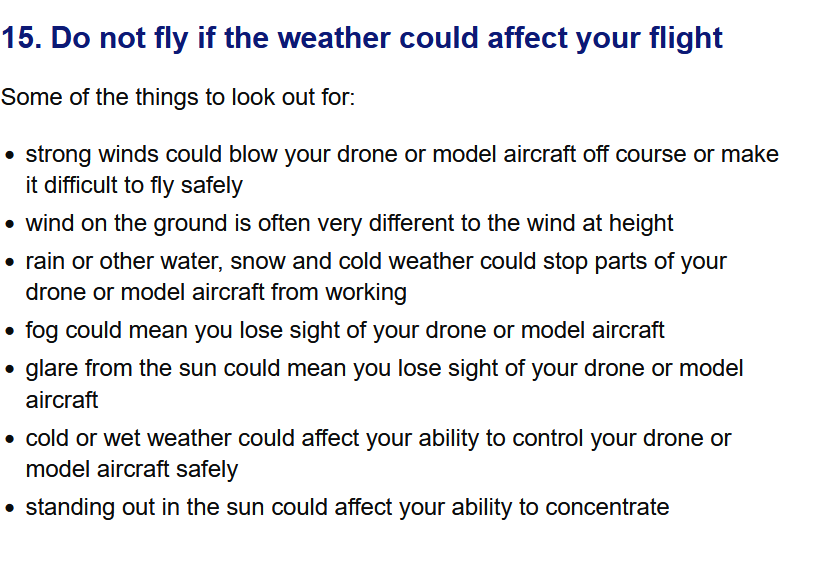 I’d echo what milkmanchris said; if you get caught out by fog or fine drizzle, no need to panic - but keep it in its bag if already precipitating.

This is the same principle that results in carburetor icing which can occur is quite high ambient air temps, up to about 30C, because in a carb the pressure drop is large and so then is the temperature drop.

LOL! I am being pedantic on myself now!

Water freezes at 0C as a general rule. Yes, there are circumstances where it doesn’t but those circumstances are outside the scope of the scenario we are discussing here.

It is fair to say that as a general rule, water freezes at 0C in a normal atmosphere.

There… I feel happy now

Still incorrect … you missed out the word “pure” - find me any “pure” water in the free world.

Any impurity will impact the freezing temperature.

I’m just going to agree with @milkmanchris
If I go out in the dry and turns a little wet I’ll get my pics. If it’s already wet I’ll find something else to do. I’ve had my mini2 caught in a few showers now, take it home and let it dry out for a day or two. No issues so far.
I’m sure Windswept Robert left his out in the pouring rain overnight after crashing it, no issues for him either.

Everyone is missing the obvious.

I hate getting wet, therefore the answer is no!