It seems that the French map (geoportail) marks everywhere with a few houses as “vol interdit” (flying prohibited). I thought that the EU rules allowed sub-250g to overfly these areas in cat A1-open. Does this mean that the French have manually overridden that rule for every populated area, or am I misunderstanding the rules here? 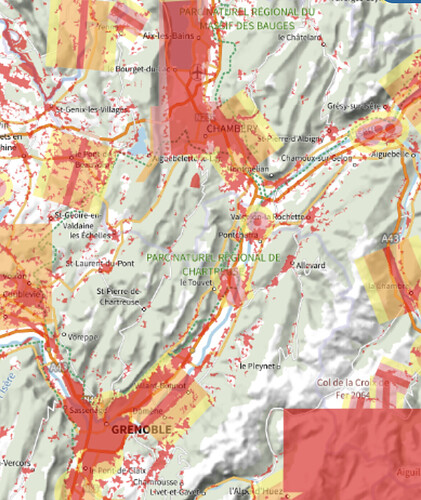 The french do what they want.
If i still lived in france i wouldn’t be allowed to fly my mavic in my own back garden. Where the marker is.

I think individual countries can still have their own rules which overide the general EASA ones.

Yes, looks as though the French have been pretty brutal in their implementation. Or (more likely) some self-important civil servant spent a lot of time under the previous rules colouring the whole country red and can’t bear to see their work undone?

Italy is pretty challenging too. They have marked almost every hospital and many upmarket hotels as a helipad and set up exclusion zones around it. So the map is covered with red dots and orange circles.

Many EU countries prohibit overflying residential properties without permission from the owner/occupier, regardless of subcategory. It’s the same in Germany, Denmark, bunch of others.

We have some of the most liberal drone laws in the continent. Don’t take them for granted.

PS: The EASA drone laws allow national authorities to designate areas as a UAS flight restriction zone for a variety of reasons including privacy. You never hear about it in the UK because the CAA said that while they’re on the books they won’t be implementing it and UAS flight restrictions will have to go through the regular airspace restriction channels.