As a hobbyist my understanding is that geofencing is there for a reason. I’ve never ran into an issue yet. Im possibly not trying hard enough of course!. I understand the frustrations of a professional drone pilot trying to work within or around such area, could see that as a challenge but for the rest of us?

Ive noted the odd mention on here but many many more times on other US based forums the uproar geofencing causes most folk over there. Many US DJI owners opting to jump on the Autel bandwagon in order to ease their suffering.

So, is it really an issue ? or is it simply an issue with those folk who cant stand being told where they cant fly?. (Much like lockdown - dare I say

Look at DroneScene - switch all layers off except the FRZ layer and then toggle the DJI Geofence layer on and off to see how much space DJI restricts us from using compared to what we can use.

eg - from a randomly chosen area … 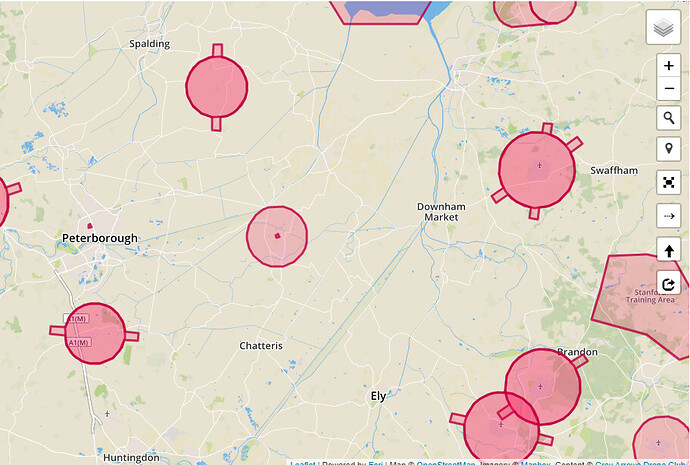 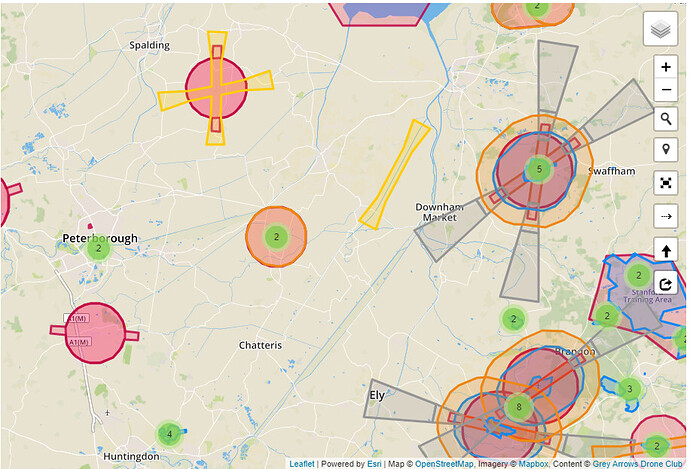 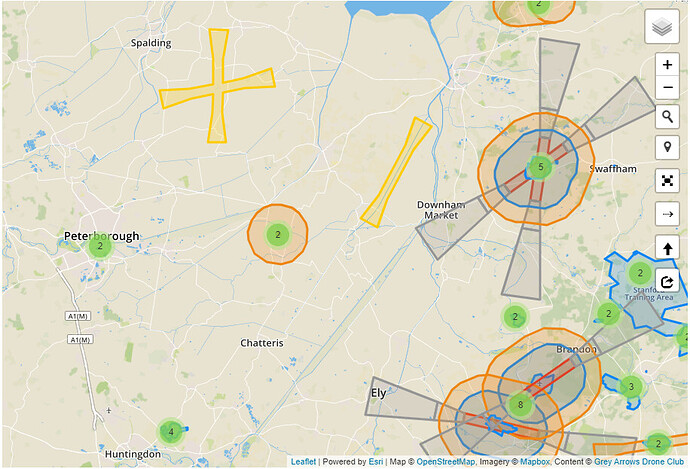 A simplification, obviously, but it demonstrates the fundamental differences.

And, perhaps more importantly, there are plenty of FRZs that don’t have a counterpart in the DJI data (I spy several in that area alone), which means people can think DJI is protecting them from committing an offence … but they aren’t.

I can see quite clearly where DJI have been over zealous with their restrictions. Is this more about them covering their arse rather than ours then ?

Nope - it’s all about them having a simple global format with total disregard to any local legislation or actual airport activity types/levels.

Remember (kind of in their defence), they have to have the whole world in your drone. That’s a tight squeeze to get anything near a complete reality.

Rather than repeat a lot of what’s been said on this in the past, take a look through Can you fly? DJI NFZs v UK FRZs and other Air Space

Its got to be a hell of a job to collate all that info and keep it up to date but then I guess theyre in the business of knowing airspace.

Yes will do. Cheers

theyre in the business of knowing airspace.

No - their business is designing and making drones and selling them at a profit.

Do Autel implement any geofencing data in their drones? Im just curious as why DJI is so heavy handed about it if Autel dont need to be.

DJI only introduced their Geofence to allay the fears of some countries that might have banned them.

It’s a shame that the worlds authorities don’t see the dangers that their limited approach creates.

In that other thread I mention how many airfields in the USA are not included … and we all know how busy us airfields are with their private/business traffic. So they overlook protecting about 80% of all the flights in the US. Laughable.

DJI outsource it to Altitude Angel, who are in the business of knowing airspace around the world

I understand the frustrations of a professional drone pilot trying to work within or around such area, could see that as a challenge but for the rest of us?

DJI’s over zealous and self-imposed “YOU CAN’T FLY HERE BECAUSE WE SAID SO” bullshit is why so many DJI owners mod their drones to remove the (often ridiculous) restrictions.

Hence DJI on certain sites is out and out banned and in my case I can’t even calibrate the Mavic 2 in my village, others will allow under certain circumstances and will issue a release…

In that other thread I mention how many airfields in the USA are not included … and we all know how busy us airfields are with their private/business traffic. So they overlook protecting about 80% of all the flights in the US. Laughable.

Thats does seem somewhat bonkers to have nothing in place. Rife for a bit of plane spotting with your drone

But the memory to hold the global data for all airfields, and other “zones”, would double the cost (and weight, probably) of the drone for hardware, and then again for the “support” to keep that data current.

To be blunt, if a drone takes out a Cessna in the USA and kills the two occupants, it might not make their national news (… as drone related. The only probable witnesses can’t give any evidence - it won’t be attributed to a drone - it will be pilot error / mechanical failure), but an airliner or detonation in a nuclear power station …

So - what DJI include is more of a PR exercise than anything reliable.

So - what DJI include is more of a PR exercise than anything reliable.

The general public, and more troubling those responsible for the rules and regs, incorrectly believe that the more sophisticated the technology the greater the threat. Terrorists and anarchists do not have access to the kind of resources portrayed in films like Die Hard 2.

“Drones” have been used by such factions but these have always been very unsophisticated builds no more advanced than a Phantom 2 carrying a mortar shell or a simple fixed wing made from foam board and cheap disposable electronics sourced from Chinese Internet companies like Hobbyking and Banggood. 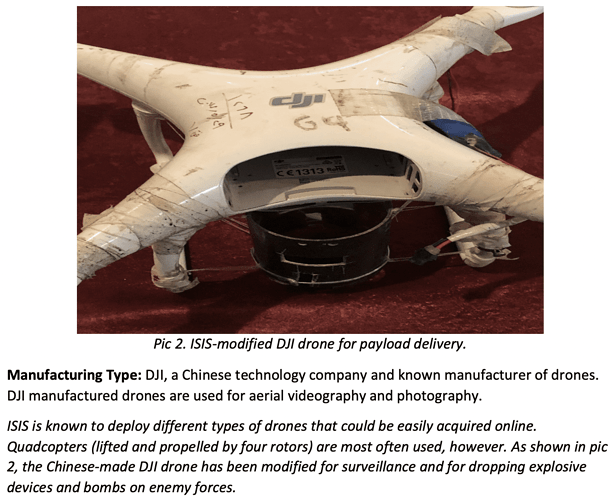 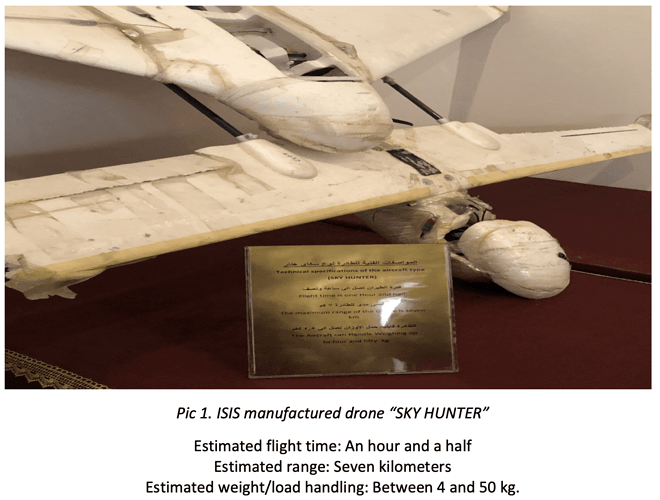 The origin of NFZ’s came about because a drunken government employee crashed a DJI Phantom on the lawn of the White House in early 2014. There was such a knee jerk reaction DJI rolled out a NFZ of 20miles radius around Washington DC and 5mile radius NFZ’s around anything that looked like an airport, active or not.

Thankfully since DJI implemented their NFZ’s they have become more realistic. This wasn’t because of they felt duty bound to their customers but because they started to receive so much grief from users and a downturn in their sales. They improved things with their popular products but not with their ancillary equipment. Below is the current NFZ imposed on my Datalink system installed on my DJI F550 hexacopter. 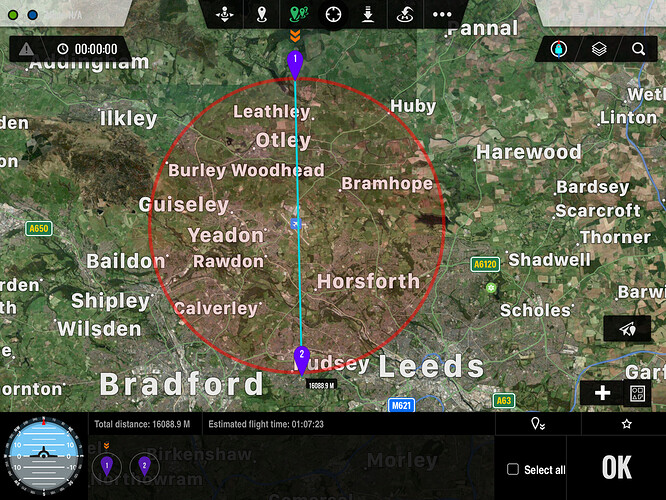 This NFZ has a radius of 8km in which my DJI F550 is incapable of being armed, even at my Modelflying Club’s site. Even my Spark when powered up in my living room will claim I’m in restricted airspace and I’m about 5miles away from LBA.

Now I’m not against electronic enabled NFZ’s but their use must fit their purpose, but seeing as how my IQ is higher than that of a lemon and I’m not a religious nutjob, I will wherever possible disable the bug or choose other equipment for reasons of safety.