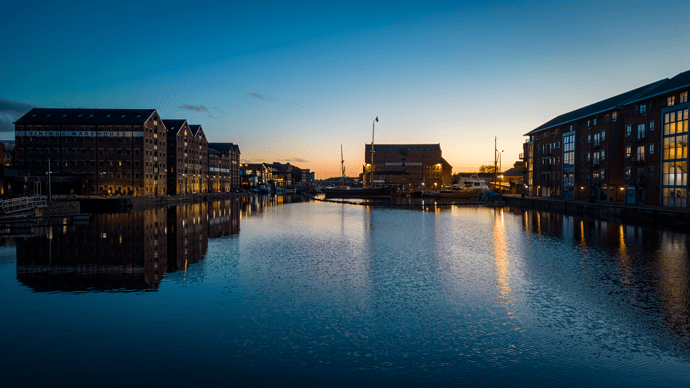 Be aware that Gloucester Prison is 150m to the north. The North Warehouse separates the prison and docks. The photo was taken pointing south-south-west.

Gloucester Docks form the most inland port in the country. Elizabeth I granted Gloucester the status of customs port in 1580. The first customs house was at the Old Quay which stretches north from the lock at the North Quay. The house still stands and still wears the royal coat of arms.

Tolls were collect for many years before 1580. The ‘Old Quay’ was in its day a new quay! The river Severn split into three sections at Gloucester and re-joined further up river. The split in the river was the reason why the Romans built a fort here – it was the most southerly crossing point into Wales.

The most easterly arm of the river came much closer to the city lapping St Mary de Crypt – actually it was the other way around; the church was sited close to what was the river. This was the site of the Roman Quay. The bridge that crossed the river here (Westgate St) was ‘Foreign Bridge’, at the end of Westgate was ‘Westgate Bridge’ crossing the middle arm. The western arm was crossed at ‘Over Bridge’

The eastern arm silted up in the C14th hence the need for a second Quay. River traffic increased in the C18th. The development of the Main Basin and ship canal saw the decline of the second quay after which it became known as the Old Quay.

In 1793 Parliament gave the go ahead to build a ship canal to negate the difficult to negotiate tidal section of the river.

By 1797 the Main Basin had been dug, the canal took another twenty years the last years being influenced by Thomas Telford.

The Barge Arm, an extension of the basin was added (1824) before the canal was linked up (1827), to allow smaller barges to keep out of the way of ships.

In 1849 the Victoria Basin was opened as the port became busier. Warehouses continued to be built until the 1870’s.

Corn from Ireland and Europe, sugar from the Caribbean, timber from Scandinavia were main imports, salt from Worcestershire exported.

Imagine 30 tall ships, barges and other small craft manoeuvring around the docks. Warehouses being filled ships loaded, trams steam engines horses vying for space among the barrel and boxes piled high, imagine the dust from Corn Mills and timber yards the smoke and soot from fires and engines mixing with the sweet talk of labourers and seamen. Welcome to C19th Gloucester.