The postie has just delivered two parcels for me. One I cannot open until Sunday as it’s a Birthday Pressie from my wife, the second is the IRC Ghost system.

I purchase all of my ImmersionRC and Fatshark stuff from Dave Brown, formally HeadinthecloudsRC but now uksparesandrepairs.com. He’s also the official IRC and Fatshark UK repair place.

Anyway, I thought I’d include a picture of the module and receiver. The receiver, known as the Atto, is currently IRC’s largest Ghost receiver. They also off a second, the Zepto, which is approximately half the size of the Atto.

Unfortunately I’m unable to do any testing today for medical reasons but my intention is to fit one of the Atto receivers into one of my Tinyhawk Freestyles and put it through it’s paces when I can walk further than the bedroom to the bathroom without falling over. 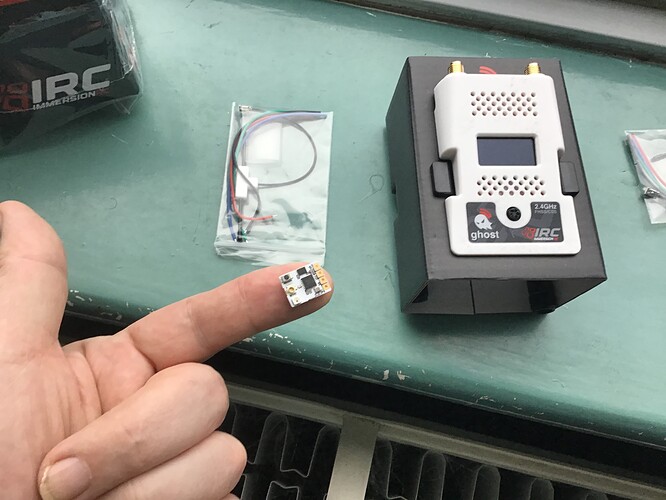 I’ve just completed my Tinyhawk 2 upgrade to the Crossfire Nano and the TBS Unify pro32 nano VTX using the Tinyleds Sled and a TrueRC RHCP Antenna. I flew it for the first time the other day and omg its soooooooooo much fun

I installed one of the Atto receivers into a Tinyhawk freestyle yesterday.

With the module set to normal mode and the output set to 16uW (0.000016Watts) and the THFS in the living room window, I managed to hobble down my street, with my TX16S in hand, a distance of about 176m before the system went into full failsafe. You can see from the Google Map image this was when there were a few layers of houses between me and the THFS. 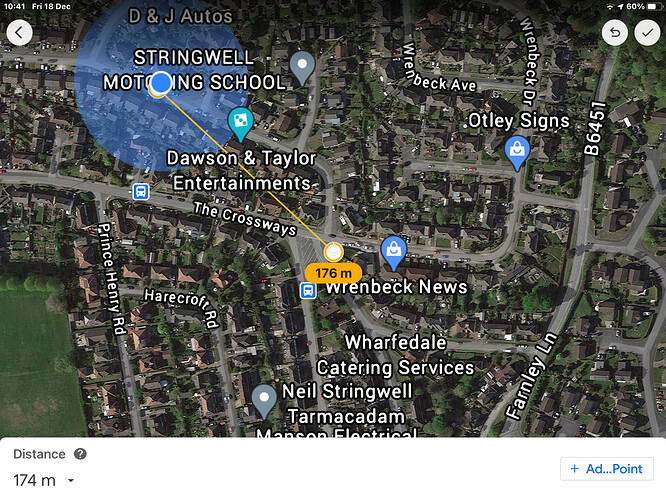 I’m sure the range would have been greater if I’d put the quad in an upstairs window as the path I walked is a relatively steep downward gradient.

The next install will be on my Birthday pressie, that I can’t open ‘till Sunday, whereby I can start doing some real world testing out in the wild.

After thinking it over in the shower I’ve concluded my test above is flawed.

What I actually did was test the range of the telemetry and not that of the important control link. I’m not certain but I believe the power of the telemetry signal is independent of the control signal and is a lot more than 16uW.

In the immortal words of our Guru, Shami Bruce Simpson, it’s back to the bench. 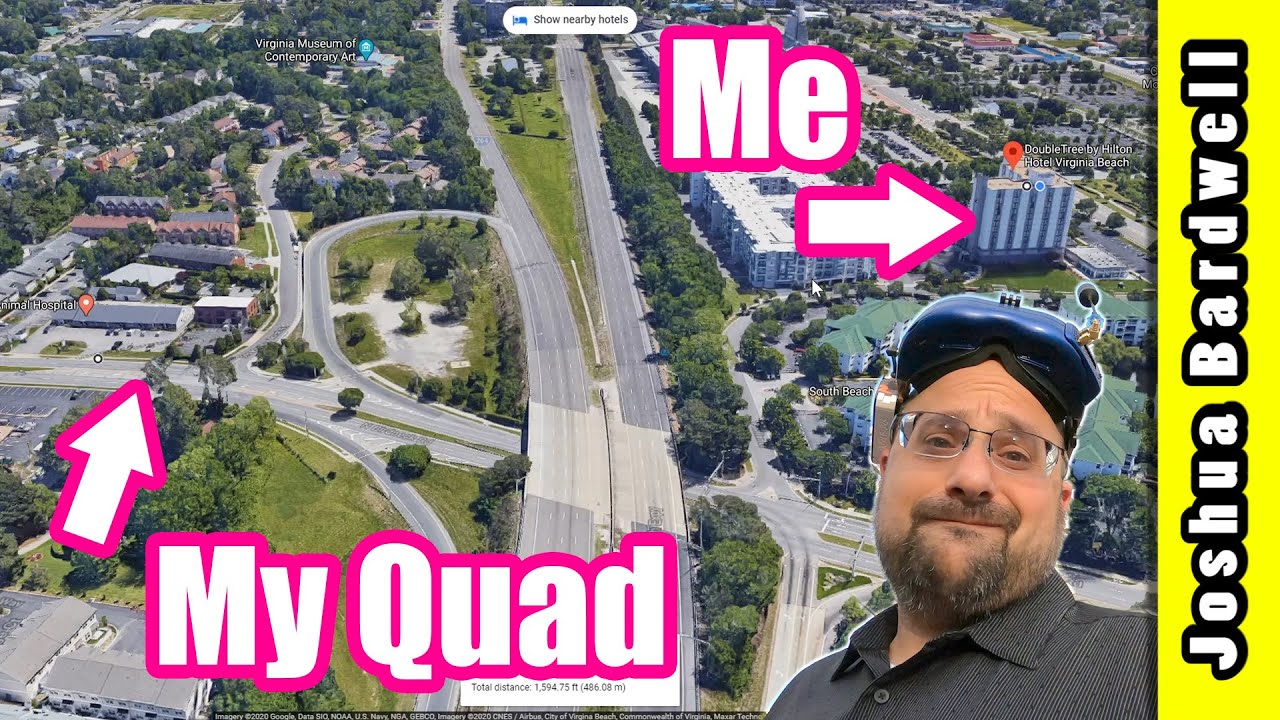 From experience with FrSky I can lose telemetry but still have full control.

The telemetry signal from the receiver runs at about 20milliwatt (0.020Watt), I was running the controller at 16microwatt (0.000016watt). As I couldn’t see the receiver on the quad I don’t know if it went into failsafe at any point during my hobble.

I was able to do a little flight test earlier today, again on 16microwatts, and I was able to fly out to about 150m where the link quality at its lowest was about 80%. I was using normal mode and the SBUS-Fast protocol. I couldn’t test the SRXL2 protocol as there are no free UARTS on the THFS, and the actual GHST protocol won’t be supported in Betaflight until V4.3 is rolled out.

I’ll soon be starting the build of a 7inch long range quad with GPS rescue and running on a 3300mAh 4s pack which I’ll be able to do more accurate real world testing.

no free UARTS on the THFS

How good is your eyesight? There might be more uarts on the f4 chip, but not wired up. You could solder direct to a pin? Or an led out and re-map?

How good is your eyesight?

I can see the Andromeda galaxy at a distance of 2.2 million light years with the naked eye under suitable dark skies, but I can’t focus on anything closer than about 24inches from my nose without some serious optical assistance.

There are pads for the UART’s on the underside of the board but it would have required desoldering the motors to gain a clear access to them, which in my mind was too much work for a few milliseconds less of latency.

I was thinking of getting Ghost but came across this test. I’m thinking of waiting until next year now after they iron out the bug. 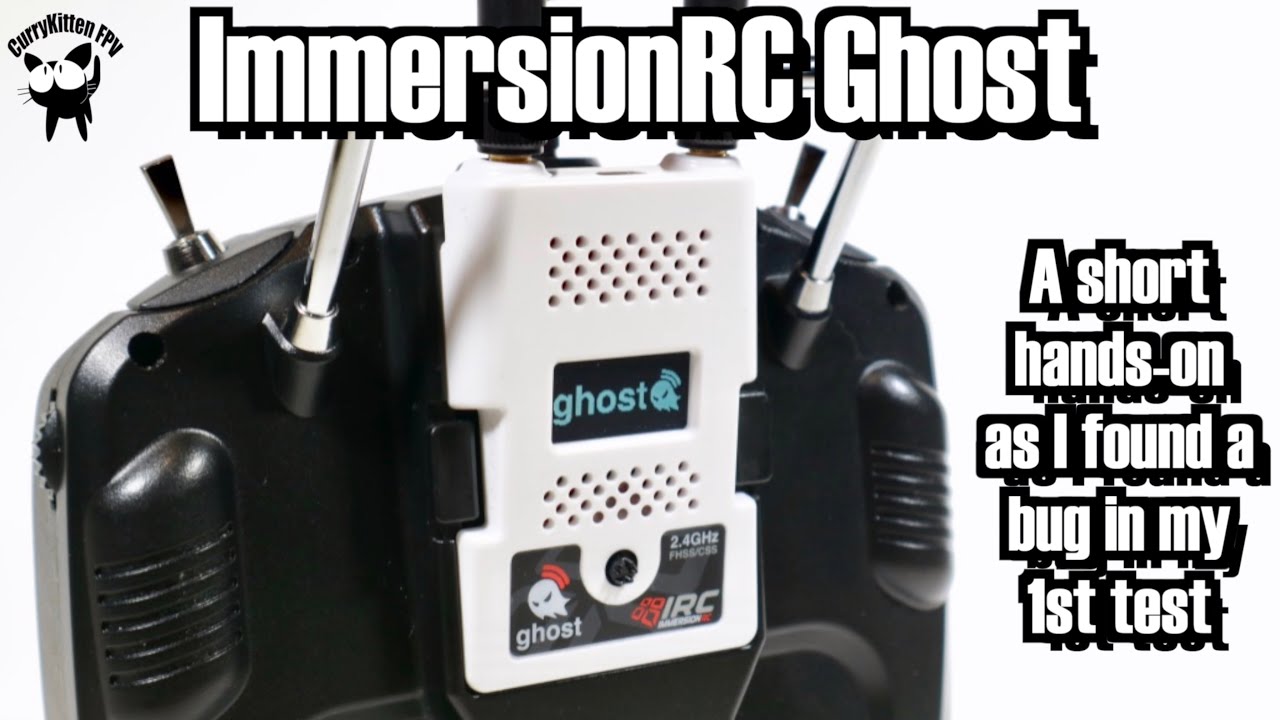 That bug has been stamped on now as there have been a few FW updates since Wayne did his review. I’ve been testing the failsafe on all the Ghost’s available modes of operation and reacquisition happens within a few milliseconds.

However I do understand people’s hesitation with this system as there’s still very little user info out there, unless you use Facebook (which I don’t) as that’s where IRC seem to only share info on their IRC Hub FB group. There was a fairly active RCGroups thread but that has been quiet since November, and info on YouTube, other than from Joshua Bardwell and Pawel (The Polish guy with the unpronounceable last name), is rather limited unless you’re prepared to watch flight videos with EDM soundtracks, again I don’t do that.

The first units that these YT peeps received were a limited first run. A major manufacturing run was delivered to dealers a week or so ago but are selling fast. I bought the last one available from UKSparesandrepairs who are the official UK service agent for IRC and Fatshark.

Thanks Nidge, as always you turn over all the stones…