It's Not All Bad - Faith Restored

I’m off out this afternoon to fly over and around a very small and ancient local country church stuck out in the middle of nowhere on the banks of a picturesque river. I thought I’d do the right thing and ask permission seeing as I want to do it from Church grounds and not from the river bank opposite (its a bit of a hike to get to) so I gave the local vicarage a call, explained what i wanted to do and a really lovely gent said it would be a pleasure to have it videoed and said he’d be grateful if I would pass on the footage to him so he could then pass it on to the head of the Chelmsford Diocese.

To tell the truth I wasn’t expecting the reply I got and thought they’d refuse so I’m absolutely delighted to be proved wrong in this instance. A special thanks will be going in the finished video.

Anyone else had any recent good experiences with authorities and/or the public?

Great! Thats the way to do it…

I’ve not had to ask yet, but there are some places when I’m down to visit family in Dorset a couple of weeks on private land that I’d like to consider.

I know some people say ask fair forgiveness not permission, but people are a lot friendlier than the Karen’s we always hear about

It’s the best way. I approached our local church for permission and they were only too happy to oblige.

I’m absolutely delighted to be proved wrong in this instance

It’s what God would want

being a complete Agnostic I’ll take your word for that

I’ll take your word for that

It works the other way round too, often it’s not what you ask but the way you ask. I got an email from a parish magazine editor asking if I minded them using some of my photos in their forthcoming issue… they had spotted them on my website. I said no, I didn’t mind, but that an acknowledgement that I’d taken them would be nice. The lady readily agreed.

Anyone else had any recent good experiences with authorities and/or the public?

I volunteer for a search and rescue group for lost dogs and regularly use the drone on searches. One we had a little time ago was a Jack Russell that had been sighted near a golf course. Being a cheeky sod, I drove straight to the golf course reception and requested permission to fly off their land. After a short discussion, I was given unrestricted access and they even provided me with a golf buggy to get to the far side of the course where the dog had been sighted - result

- more importantly, we got the dog back too - everybody happy

These are the types of stories that need airing to a much wider audience. This, I feel, is one of the most important ways in which the publics perception of drones and their pilots is going to be changed going forward.

That’s a great result. If it’s somewhere remote I normally don’t ask, unless I see someone while I’m there.

Talking to our Vicar recently I found out there had been a leak on a part of the roof and I offered to put up my new drone and take some photos if that would be helpful as well as being good practice for me. The Church Warden asked if I could take some photos in the valley between the two roofs which was not visible from the ground and also said I would be covered by the Church insurance. I took some photos and passed them onto the Church Warden and was able to point out where some slates had come off in the valley, during recent windy weather, and they were able to have the slates fixed before the hole allowed rain in. I think I may have found myself somewhere regular to fly and practice survey type photography.

I’ve been taking normal & 360 photos of the local area. Posted them on a Facebook group and as well as the likes, got requests for specific areas which I’ve nearly all done. Keeps me occupied and I’m not just flying because I can.

I wanted to ‘do’ some churches but on asking was asked not to as thieves use the footage to steal the lead!

Posted exactly the same time as photos of a church #GoodBadTiming. 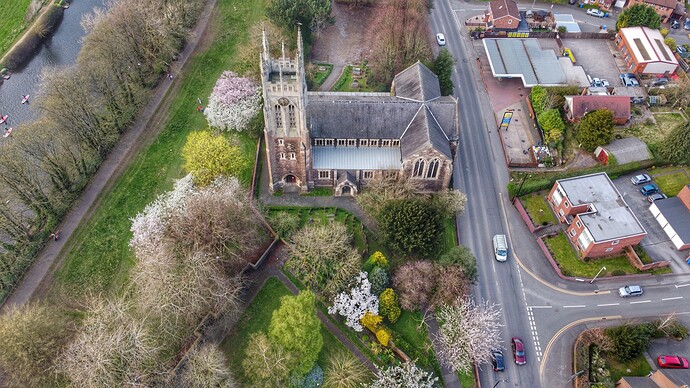 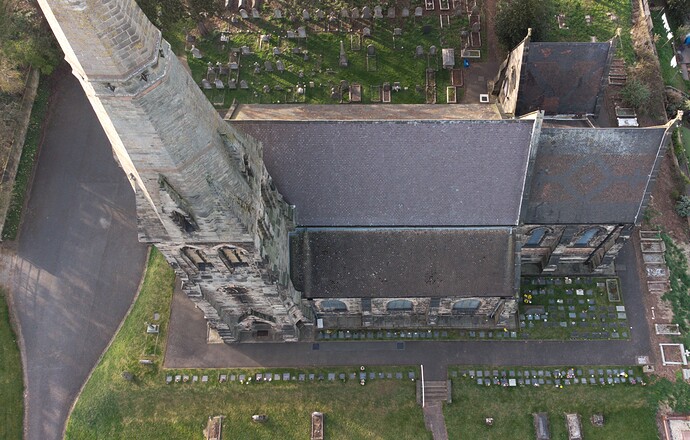 Had a similar experience … The wife and I were visiting Little Malvern a year or so back and stopped in at Little Malvern Priory. There was a churchwarden in attendance and he not only encouraged me to film, he took me to the best spot to take off / land / etc.

I then sent a copy of a photo, as promised, to the vicar only to get an eMail form the lady of the manor’s (Little Malvern Court) secretary, asking if they could buy a copy of one of the photos. The one of the church you can see here:

I have just added this to the map of places to fly your drone at Drone Scene - Location # 574 [image] Land owner permission obtained. Parking on the other side of the road to the priory. I have placed the marker for where I stood and flew from. Technically I didn’t need landowner permission as the land was publicly accessible - however, as I’d visited the fascinatring little church (lots of history to it) and bumped into one of teh churchwardens I asked and told him what I wanted to do and …