Largest capacity MicroSD card the Mavic Pro can use?

Hi
May have been asked previously, but what is the largest capacity micro sd card can the Mavic Pro take. I am currently using a sandisk 64gb extreme pro, but wanted to see if I can put something bigger in it.

As far as i am aware (i may be wrong)

But i think 64gb is the limit for the MP

Has anyone tried Huawei Pro plus cards, they are U3 and seem relatively cheap

@raider64
Thats what I have at the moment 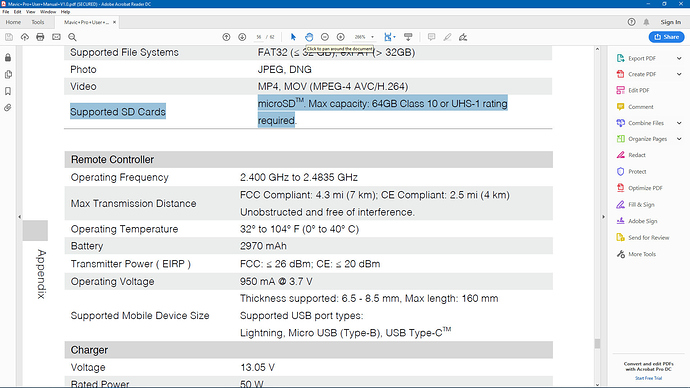 That’s from the manuel for the MP

May have been asked previously, but what is the largest capacity micro sd card can the Mavic Pro take.

I’ve used a 128 to check it works … but I see no benefit.
You have to change batteries way before you can fill up a card … so why not change the card and make sure you don’t lose what you’ve already recorded?
I have several 64s - and they rarely get to half full.

so why not change the card and make sure you don’t lose what you’ve already recorded?

That’s always been my thoughts as well. Got a stack of 32GB cards.

Think I’ll need to rethink that strategy doing hyperlapse on M2P though.

Thanks @raider64 and @callum

Have you checked to see if it writes over 64GB on the 128GB card?

I know it was happily reporting the correct time remaining that could be recorded.
I seem to recall my attempt to record the full capacity was interrupted by a failed cooling fan after just a couple of minutes.
It was correctly formatted by the MP for the full capacity.

Yes - I looked back - the failing fan was the reason I never completed that test. I’ll do it again and complete it.

I’ve just formatted, but I’ll leave it in and not re-format until it’s getting really full again, to double check. But I can’t see it will be any different.

A post was merged into an existing topic: New memory card

I’ve read all the answers… as others have said 128GB is compatible.

Less chance of a full card wen you go out

That’s as much 4k as you can record with 15 batteries!

I’ll give you a prize if you manage to fill a 64Gb in one normal day.

So cheap now too

But the fact that a 64GB lasts anyone more than all day means that all 3 of your previous arguments are invalid.

Fair comment about 64gb lasting a day, but you reminded of me of 2 more reasons to go large