Hi,
I’d like to start exploring, (read that as playing with) the use of 1G2 for FPV.
I believe the legal requirement is an amateur radio ‘technicians’ certificate, I’ve heard this is not that arduous to obtain as the good old HAM certificates from the days of morse code etc.

Has anybody trod this road before? I’d be grateful for any advice.

Unfortunately it’s a very big NO !!!

As it stands in the UK and all other Region 1 countries the amateur radio license does not permit the installation and use of any radio transmitting equipment onboard an aircraft, whether that be General or Model Aviation. I’ve held a full amateur license for close to 40yrs and I’m still restricted to the ISM allocations and the power limits of these license exempt frequencies.

Things are different in Region 2 countries, the continental North and South America’s, where holding a technician class or above license does allow for Ham’s to operate airborne on amateur frequencies with power levels in excess of 25milliwatts.

As for the exam itself? The first tier or Foundation level, is not that different from the CAA drone awareness, two dozen multiple choice questions, but aimed at the level of a five year old. And I don’t mean that sarcastically as the RSGB, with OFCOM’s blessing, aimed the exam so as to attract infant and junior school kids into the hobby which, and this maybe just me, sounds a bit creepy when amateur radio is predominantly populated by men of pensionable age.

Below is the ITU Region Map. Region1 is Yellow, 2 is Blue, and 3 is Purple 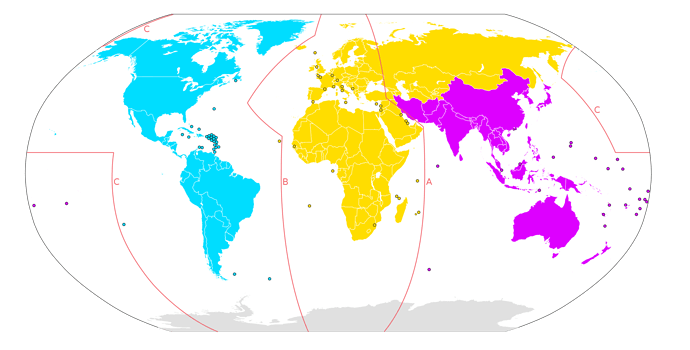 Hi @Nidge Nidge
Thanks for your reply, I had a feeling you’d know about this, it seems your knowledge of this hobby is vast

So it sounds as if what I’ve been hearing about ‘technicians’ certificates is postings from our ‘comrades’ over the pond.

Looking at the UK allocation tables, could I pretend I was an experimental amateur low altitude satellite

Not without a suitable license. Even amateur radio is only permitted on a secondary basis.

The table below lists the current ISM allocations. You will notice that the 459MHz and 868MHz RC allocations are not listed as these are frequencies specifically set aside for RC control. 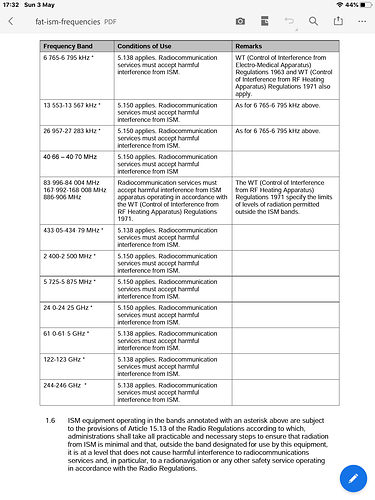 …868MHz RC allocations are not listed as these are frequencies specifically set aside for RC control.

I gave some thought to the R9 system but I was a little bit put off by FrSky’s earlier attempts at a UHF LR system. Instead I went with the EZUHF (selectable allocations between 430MHz and 460MHz. Another reason I chose it was because of its easy integration with the EZOSD I use on my Xugong V2 Pro, and I can legally use the high power setting on 433MHz with my amateur radio license as it works ground to air and not air to ground.

but isn’t R9 just control, didn’t think it did video