I’ve learned from experience with my bebop2 and then reading that leaving LIPOs fully charged or discharged too long is a bad idea. What I am not sure is what ‘too long’ is. Should I bother part charge depleted batteries to their storage voltage when the next flight might only be a few days away or should i reserve that for when there is no prospect of flying for a few weeks/months ?

Try and storage them when you get home, but ok if you’re out the next day.
I personally wouldn’t leave them a week.

I won’t leave mine longer than 2 days, I normally charge the night before I’m due to fly. Then storage charge them as soon as I get back from flying. If charge on a friday night ready for a saturday but it gets rained off if I’d have a chance to fly on sunday I’d leave them charged but if I wasn’t gunna fly on the sunday I’d storage charge them.

My Nanohawk came with a single 300mAh 4.35v (1s) and a very basic USB charger. Up until now, that battery is either fully charged, waiting to be used, or fully depleted. It could be in either state for several days.

Feel free to tell me to stop being lazy and go look it up.

Storage voltage is neither depleted or charged and it keeps the longevity of your batteries. Fully discharging a Lipo will damage the chemistry inside and degrade the batteries performance. Can also damage the battery beyond repair. 1s lipos are difficult to storage charge. So I usually land at 3.8v per cell (storage voltage) most if not all decent lipo chargers will have a storage charge mode on them. As long as you keep an eye on your batteries while they are charging you’ll be fine. Keep checking the temperature of the battery while its charging feel it getting warm then stop it changing immediately, find a way to discharge it and dispose of it as that battery is now toast. I’ve had a couple of the 1s lipos fail on me like that.

Edit: also check for signs of puffing a puffed up battery is also toast and should be discharged and disposed of.

Chemically what is happening is as the LiPo ages the formation of dendrites takes place, these are whiskers of lithium. If the battery is left in a state of high charge or depleted state the growth of these dendrites is accelerated. Eventually these structures can pierce the separator in the cell or short the anode to the cathode of the cell. One method to determine the health of the cell is to measure its internal resistance, the higher the resistance the less ability the cell has at supplying the power required.

In some battery chemistries it is possible to retard this degradation by applying very short electrical pulses to the cell. This is how a lead acid car battery can be rejuvenated as the process breaks up the coating that forms on its internal plates. A similar process can be done to NiCad and NMHi batteries. Unfortunately I don’t know of a safe method of doing this to lithium battery chemistries.

To be honest I’m very lazy when it comes to my parental responsibilities of LiPo batteries. But I generally find I only use between 55% to 65% of their capacities anyway so they’re as close to a storage charge as makes no difference.

My Mavic 2 Pro LiPo batteries are intelligent and they discharge themselves when stored with too high a charge. From memory they discharge at around 5% per day until they reach their optimum storage charge which is somewhere between 50%-75% I think.

I messaged DJI once about this and the advice was to store them out of the drone at about 50%. 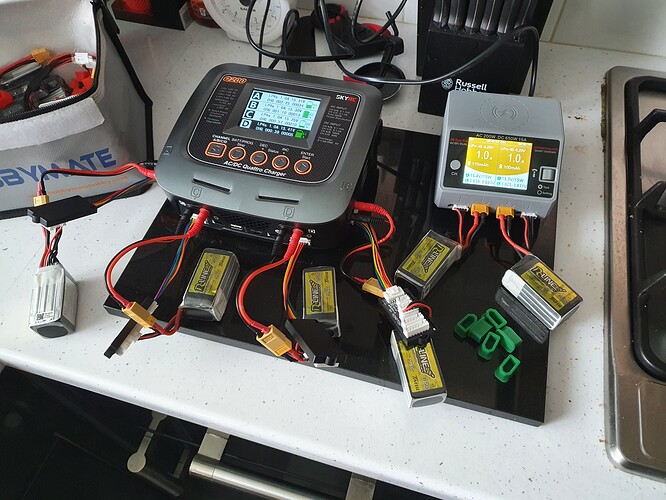 living life on the edge.

Extractor fan nearby though

Haha yeah the fake cooker hood will do an amazing job

I really should at least invest in a fire extinguisher

Keep a bucket of sand near the back door, save a few bucks

Not a bad shout

I’m probably one of the worst abusers of Lipo Batteries. In storage terms. I can leave my fixed wing Batteries for years without attention. Other than visual inspection once a month, in case one gets pregnant.
However I always buy good quality (proven) Batteries. Discharge to storage voltage once home, that planned next day flight might not happen. Never charge above 1c, even iff the battery is capable of it. Try to vary throttle control so the Batteries don’t get too hot. Keep them warm in Winter when out flying, jacket pockets, easier to doff a jacket than your trousers if one decides to commit suicide. Iff one takes a heavy knock or I drop it, that is relegated to an Ammo box for a weeks observation.
I usually get about 6 to 8 years use from a 3 cell (non smart) Lipo. Allegedly a good way to safely discharge a swelling Lipo is to drop it in a steel bucket of water and Salt, outside.
I treat my Mavic Air 2 and Mini batteries the Same.
Kitchen sink makes a reasonable safe charging Bunker.

Just in case you have missed it:
DJI Mini 2 drone getting firmware update to address battery charging issue

Dronemaker DJI says a firmware update is coming to fix a battery discharge issue in its DJI Mini 2 drone. According to TechRadar, the company says the update will “initiate auto-discharge when batteries are in the drone or charging hub and have not been used recently.” It’s a relatively minor issue that mainly affects the battery’s longevity; lithium polymer batteries like the one in the DJI Mini 2 have a longer lifespan if they can discharge slowly when left at a full charge for a long period of time.

As example: DJI smart batteries when they are full they would discharge to 96% after one day of being unused - after 5 days of being unused they discharge down to 72%.
As a normal practice - I discharge my batteries for storage at 50%.
I would do this when my battery is fully charged 100% and if I will not fly in the next 5 days.

Allegedly a good way to safely discharge a swelling Lipo is to drop it in a steel bucket of water and Salt, outside.

I’ve got a bucket full of them outside my shed

I have been reading some horror stories about these batteries. I have loads of experience with LiOn and NiCad and never really had any problems. I’ve been reading stories of them going on fire while charging and when being used and its starting to scare me a little. Surely using brand names and their own chargers shouldn’t really cause any problems? I only ever buy recognised brands, and only ever charge them with their own brand of charger,. Should I do as I’ve read and only store in a LiPo proof bag and charge in a fireproof container, thats not right surely?

Moved your post to this thread that discusses the subject. 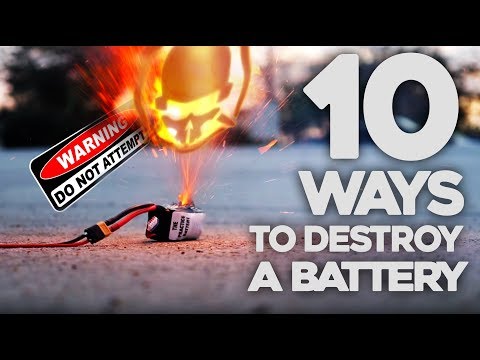 You should store them in a Lipo bag or a metal container 100%. Overcharging them is the worst thing you can do but any decent (and most shit) chargers wont allow you to overcharge anyway.
Never charge them unattended, if you run them down to 0v they are dead, do not recharge them. If they go puffy get rid of them.
Anyway you can watch that video to see what they do if you dont treat them properly.