Hi all. I’ve been having a play creating missions on the PC using the Litchi hub and all working well except when wanting to orbit a PIO. If I only put 3 or 4 waypoints around the PIO the camera doesn’t stay focused on the PIO in between waypoints even though they are all set to focus on the same PIO. The only way I can achieve it is by having loads of waypoints around the PIO. I’m I doing it correctly???

“POIs” are a Litchi Mission construct, and this information isn’t uploaded to the drone as a result of the limitations of the DJI API that has to be used.

The DJI API doesn’t know what a POI is - it only knows WPs and the camera orientation at each and can extrapolate angles between WPs uniformly (on a distance/time basis) between each.

This post explains the extreme situation when flying in a straight line past a POI - and the same thing happens on a curved or polygonal track to a greater/lesser extent: Some notes on using Litchi

You are probably getting the issues that this causes.

The “curved” waypoints used to orbit have to create an accurate circular track for the POI to be viewed as accurately in the centre at all times by the footage.
If the track is 50p-piece shaped, for example, then the POI won’t remain central to the line of the camera - in pan or in pitch.

Thanks for your reply and follow what your saying but I need to study it to grasp it clearly.

I appreciate your help Terry. Am I right in saying this will keep the poi in centre as I’ve kept everything equally spaced from the poi including in between waypoints? 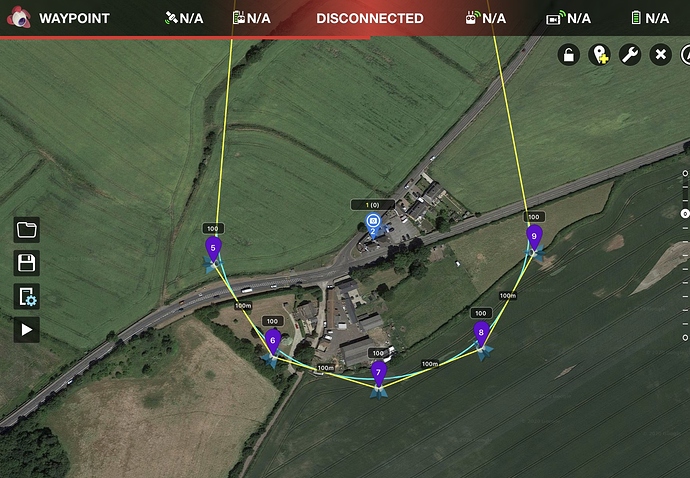 But the turn does look ok

Have you tried using VLM to check the flight?
There was a time when VLM didn’t accurately recreate this issue, but I think it has done for a while, now.

Small wobbles in the POI’s position in the video frame can be easily removed if your video editor has a good tracker/stabilizer.

Yes mate I’ve flown it in google earth pro and works a treat. Curious to see if the actual flight looks the same when I have the chance to fly.

I just checked. VLM does correctly recreate the “problem” perfectly, so, if VLM is showing a good lock on the POI when playing the camera view in GE, you should get what you want.

I’ve made a mission video showing the google earth mission along side real mission.

The car didn’t line up.