Hey all, I had a few issues today with gps signal vanishing and the mini 2 switching to atti mode.

I flew at a reasonable height and wouldn’t have expected any gps issues.

I’ve had the mini 2 for a few weeks now, have clocked up 5 hours and 49km but had not encountered this before today!

I landed, restarted but had the same issues and at about the same distance out again.

Here is the screen recording showing the errors: 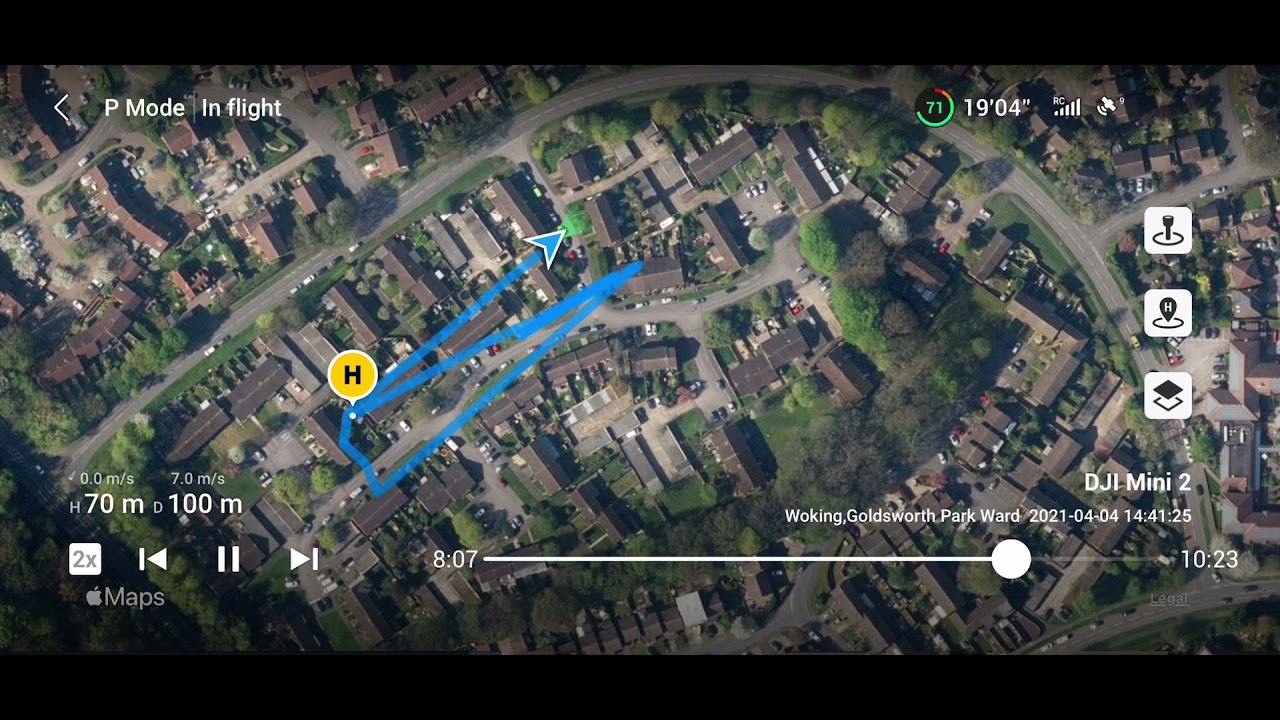 Here is the Airdata link confirming the same: https://app.airdata.com/share/XdxLeY/SENSORSGPS

Any thoughts anyone? Thanks.

I landed, restarted but had the same issues and at about the same distance out again.

Have you tried it in a field instead of surrounded by houses?

Not since this happened yesterday, but will try as soon as conditions allow. BBQ weather yesterday and snow today!

Is there anything in that location likely to interfere with the signal from the GPS satellites ?

The only time I’ve had GPS drop out in flight ( Air 2 ) was in close proximity to a cellphone tower and a ship with its radar running, and signal was re-established fairly quickly

Trying to find location info from your Airdata link. This sort of thing can sometimes be the problem

Yes, I lost GPS in pretty much the centre of that map, near the “GO” in “GOLDSWORTH”.

I’m quite new to the DJI mini 2 (only a few weeks in), but this is the first time I’ve had this issue despite practicing quite a bit in the area… I hadn’t experienced the issue in the area with previous non-dji drones either.

Does electrical interference impact GPS signal to the mini 2? I thought any interference would impact my ability to communicate with the mini 2, but a complete GPS loss?

It was almost like GPS was being completely jammed, but also quite unlikely - in the middle of a large housing estate, not too far from several airports… No NOTAMS suggesting that sort of thing in the area either.

There is diddle-squit radiated from solar panels.

Edit: The only relevance of EV charge points would be a very rapid drone battery recharge … with the right connectors!

Are you on the latest firmware? There was a GPS drop out issue a couple of updates ago.

Yes, all firmware / app etc. bang up to date (updated with all batteries).

The flight before that was a couple of days prior, indoors with prop guards on, so it obviously forced it into no-gps. No incidents to report of there though.

The only other thing that wasn’t standard was that I had a freewell 32ND/PL on. I don’t imagine that would have caused any issues though…

I was thinking more along the lines of the amount of WiFi in the area and of course, the close proximity to the various airports.

Just been reading this, also may be something to consider 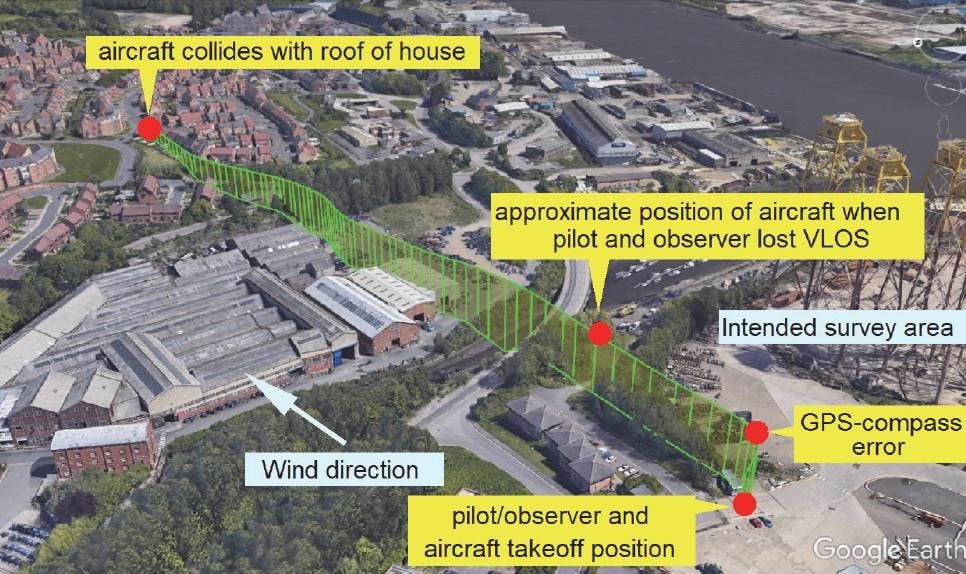 Interference with satellite navigation signals caused a 25-pound drone to drift with the wind until it hit a house, raising safety concerns that will have to be addressed by planned drone delivery services like Google's Wing and Amazon’s Prime Air.

“The GPS signal from orbiting satellites is very weak, equivalent to a car headlight from 12,000 miles away, so is easily swamped by a nearby transmitter no more powerful than a cellphone”

Well, I decided to brave the wind and went out and found an open field.

No problems this time. I used up 3 batteries just bombing around in sports mode.

So, perhaps it is the built up area!? Perhaps with everyone at home on Easter Sunday there was far more interference than normal given I’ve flown this area countless times problem free.

Just a thought and I have no proof of knowledge as I am fairly new and should probably keep my thoughts to myself but most of these problems are seeming to be and happen in built up areas , with the new rules and lots of people getting the mini / mini 2 and flying in towns and cities although perfectly legal , is there just to much interference and signal blocking by buildings etc for this to work well ? As I said just a thought .

It’s too close to the home point to be something like your typical built up area. I’ve flown much further over urban areas with no issues at all, GPS or signal.

May just be a one off. I personally wouldn’t worry about it if it doesn’t happen again in the next few flights.

Next time (if) perhaps think about bringing it home to check shit out instead of continuing to play ;o)

Or at least start recording so you can find it easier

Next time (if) perhaps think about bringing it home to check shit out instead of continuing to play ;o)

I think this would be good advice, as I can see you going looking for a drone!

The other alternative is possibly faulty or inadequate hardware. I’ve had my Mini2 for a month or more but I’ve not had the opportunity to give it a good Rodgering to really find its strengths and weaknesses.

GPS is so common place now but the make-up of the system is anything but. The construction of the signal and the network as a whole is extremely complex, employing sophisticated modulation techniques, encoding, error correction, etc. Rather than external forms of interference the culprit can often be identified as something in or on the drone itself.

Back in the day of the Phantom 1, when everybody was hanging GoPro’s and Möbius action cameras off it, there were a lot of reports of poor GPS acquisition when the cameras were powered on. It wasn’t just the Phantom but any model using a DJI Naza controller and GPS receiver. The solution was to insert a SAW filter in the signal path to mitigate the interference.

It’s never a good practice to have a receiver and it’s antenna in close proximity to fast switching digital circuits, such as switching power supplies, processors, and such. This is why you will still see GPS systems on many commercial and self built drones mounted on masts, away from other electronic components. Just the other day I was flying two identical quads, one with its GPS receiver mounted out on one of the arms and the other with the receiver mounted directly above the flight stack. The latter really struggled to attain a satellite count suitable enough to provide a reliable location fix, where as the one mounted out on the arm provided a solid fix in under 20seconds from a cold start with a satellite count in excess of what was needed for a suitable HDOP.

Another thing to consider is the calibration of the compass. This was sort of critical for the Spark, as the GPS and compass are continuously comparing results with each other. In the case of the Spark if the GPS and the compass started to disagree with one another the DJI algorithm would drop GPS and give preference to the compass and enter ATTI mode, even if there were 18 or more satellites being detected. It’s only once in ATTI mode would the compass errors start being reported by which time, if the operator wasn’t clued in, the Spark would be off to do its own thing.

I always advise to calibrate any drones compass away from any possible sources that could skew its operation. That means don’t calibrate it in your living room, driveway, on the patio, but in an area without electronic smog and metal work. Once done do not recalibrate. If you get a message saying to recalibrate first move to a different area and see if the message disappears as this would indicate a possible interference. If you calibrate in an area of interference then all you’re doing is a bad calibration. If you move a significant distance and the system is still reporting compass errors then fine calibrate. This could have been the result of storing the drone in an environment where there was a strong magnetic field other than the natural magnetic field of the Earth.

I notice your app is showing “P” mode rather than “N” mode. Are you not using the DJI Fly App?

I notice your app is showing “P” mode rather than “N” mode. Are you not using the DJI Fly App?

P is position mode (Normal) in the DJIFLY app