My replacement drone due to error 10008 (black frames)

As is documented elsewhere both here on this forum and along with many other users on many other forums, I too have been suffering the dreaded “error 10008” issue when trying to export a project from iMovie or FCP, from my DJI Mavic Pro.

I’ve changed every possible setting in the drone, shot in 2k7 and 4k, no matter what I do, this sodding error persists. Drives me insane. It turns a 10 minute video edit in to a two hour session

Today it finally tipped me over the edge.

While contemplating cashing in my DJI refresh, I took a punt and rang Argos (where I bought my drone) to see what my options were. I explained to the lady on the phone (UK call centre!) what the issue was and I said that I bought the drone three-months ago tomorrow, so it was 18th June vs 19th September 2017.

“No problem”, she said, “Would you like it collected?”

“Er… yes, I am”… still slightly bewildered by a customer service department that was actually helpful

“Ok”, she said, “We’ll collect the faulty one and deliver the new one before 10pm tonight.”

You’re shitting me, right? (was my initial thought) but no shit, I repeated this back to her and that’s exactly what she said.

So, I’ve just nipped in the loft and grabbed the box and put my drone it in. She said just make sure it’s secure, she didn’t seem bothered about the original packaging (although I still have it).

Not sure what’ll happen later as I’ve sold the DJI flymore case… So in the original box I’ve put just the drone itself. No memory card, no props, no batteries, no controller, no nothing, just a lonely looking drone.

I shall tell this to the delivery driver when they arrive later and see what they say, as I’m expecting them to bring me an entire boxed retail flymore package?

Anyway, thought I’d document my experiences here and provide a positive review of a supplier for a change

This email just arrived, along with a text message on my phone too: 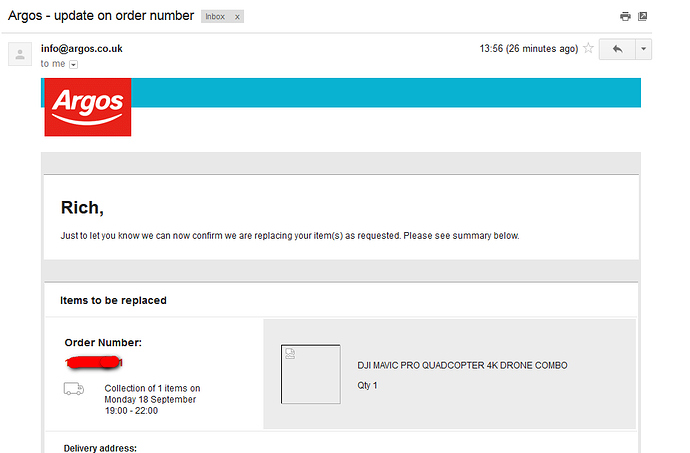 Are you sure you weren’t just dreaming all this?

You know when something sounds too good to be true…?

Well, true to their word, an Argos van just turned up, collected my 3 month old faulty Mavic and handed me a shiny new one

Just waiting on the firmware update(s) to finish, bit too dark for a test flight now though

Omg god that is what you call service fantastic, I may have to take back what I said in another post regarding the memory cards I had issues with uploading but I put it down to the SanDisk cards, once I changed over to the U3 samsung it cured the problem ???
Well done to Argos.

So…are you now the proud owner of 6 intelligent flight batteries and a spare DJI bag?

thats amazing service!
even better the fact I’m guessing you have 6 batteries now?

Yeah it’s weird, Argos gave me an entire flymore combo box and only took away the Mavic itself!

I thought it’d be like a mobile phone replacement where they say take everything out, including the batteries.

I’m not getting excited (yet) as I’m fully expecting a call or email from Argos when they open the box I returned.

Have I forgotten anything?

This springs to mind… 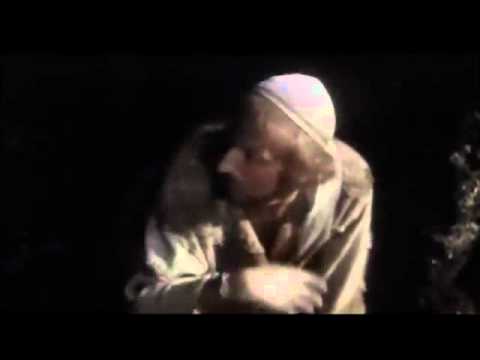 @Ktm250 Possibly… I’ll leave it a month or two before I unbox any of it. Sods law they’ll write me a letter or something in four weeks time asking for a few hundred quids worth of accessories back!

So I’ve started the ball rolling on transferring my DJI Care Refresh to the replacement Mavic.

I sent the following email to djicare@dji.com last night:

My Mavic pro developed a fault and my local store replaced it for me.

Can you transfer my DJI Care Refresh from my old Mavic to my new Mavic please?

The order number for my Care Refresh is: x

I activated the new Mavic yesterday.

Got a reply back 12 hours later (this morning):

Nothing to worry about. We would like to assist your request to transfer the plan to the new replacement unit. Kindly provide the following information.

We will be waiting for your reply. We appreciate your cooperation.

For the “proof of return / case number” I sent them a screen shot of the email Argos sent me confirming the replacement (it had an Order Number on it). Hopefully that’s all they’ll need.

I’ll update this thread again when I hear back from them.

Went for a test flight this morning - no issues to report

First issue has come to light…

I created 600x jpg files and copied them to the card, but it’s clearly cleverer than that

Just had an email back re DJI Care Refresh, they’ve transferred it to my new Mavic:

Interestingly enough, they’ve also reset the dates? I was expecting just nine months remaining but they appear to be starting a new Care Refresh from today.

I’m not going to argue

Just the all important # 8 to try now!

And once again…
Well done

I’m gonna play the lottery at weekend. Pick 6 numbers for us

Which may mean something to some people

Which may mean something to some people

Sorry, I’m ‘lost’…dunno what you mean.

Just had an email back re DJI Care Refresh, they’ve transferred it to my new Mavic:

Interestingly enough, they’ve also reset the dates? I was expecting just nine months remaining but they appear to be starting a new Care Refresh from today.

Those dates are 20th June, not 20th September (the day I transferred my Refresh).

So yes, they did only transfer the remaining amount of Refresh cover that I had, they didn’t start a new policy for me as I first thought.

Not that it matters now anyway, as this drone has since been returned too!! Now transferring the Refresh to a third Mavic. DJI Support are going to think I’m taking the piss.