Guys what micro SD card do you guys use, reason I ask is the one that I have used past month since buying me Mavic Pro Platinum was the additional fly pack one I had which was a 32GB

I have however just been browsing and just ordered a bigger card 64GB that is also Sandisk extreme 4K , this got me looking at current card and it’s not a extreme card so I’m wondering if I’m doing me Mavic an injustice here with the recording

This is what I’ve ordered

Looks fine to me !
That’s the Extreme Plus, should be even better than the other !

Agree with you Chris. Get the fastest you can.
On You Tube, 501 Drones, has a great short video explaining all the different symbols used on memory cards, and which is best for our use.

Oh right cheers, I’ll have a look at that.

Hi All
I went out in the bacvk garden yesterday to check a few things with the drone, took a few short videos to check gimble pitch etc came back and put the sd card in a not so good reader but the card went in way further than it should have done, so had to prise open the card reader and inthe process broke the card in half. Yeah yeah all have a laugh…Do I get a plonker badge for that?
So I ordered two of these 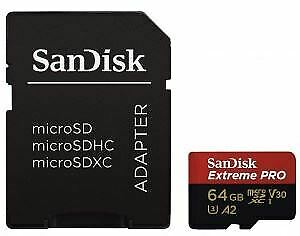 They have a higher write speed than the standard Extreme Pro.

Also - that item is out of stock.

I forgot to say, @SkyJumper I split one of your other topics a couple of days ago too: Slow sd card - #20

(As that thread was related to the speed of the SD card, not the size)

Please fire up a new thread for new questions

@OzoneVibe, yeah maybe I got the last ones, but the point of showing it was more to do with the card, it is faster than the standard Extreme Pro.

@PingSpike
Yeah I noticed you had done that, its ok by me and I will start a new thread for further questions.

The Sandisk reference they quote does not tie into the picture they show or specs they quote.

Search for SDSQXCY064GGN6MA on the Sandisk site give you this page. 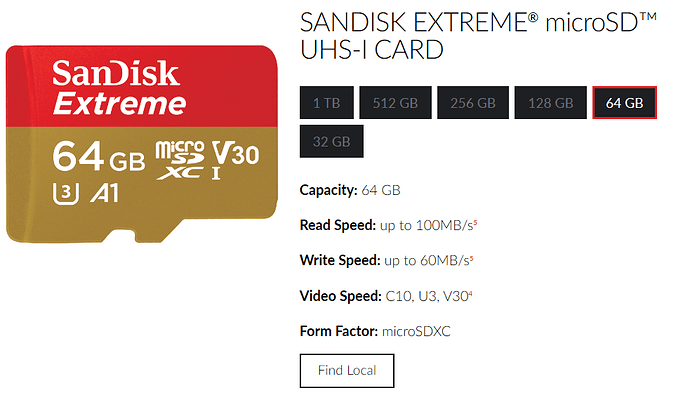 This is the card I have ordered 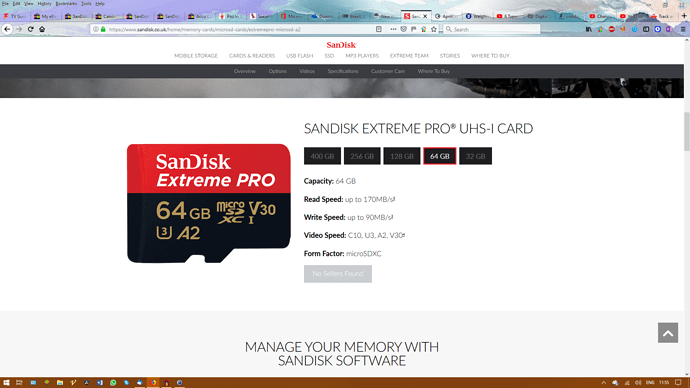 Sorry not sure how you grabbed that image, so the above is a screenshot

Sorry not sure how you grabbed that image

OK, but I don’t get the point you are trying to make

That what you receive may not be what you think you are buying.

It would worry me when they quote a full SanDisk reference that doesn’t tie into the photos/specs they are showing.

OK well I get the point, you think it may be a fake

It may not be the correct spec - whether it’s fake or not, or whether they made a mistake with specs/reference, I can’t tell … obviously.

Lets see, the seller has more than 240000 transactions with a 99.9% positive feedback, so they would have a lot to lose by sellling fake cards. I do take this sort of thing into account when buying on ebay, I avoid any seller that has less than 1000 transactions. Having said that I have been caught out before, Sandisk were very helpful in identifying fake cards.

I haven’t said it’s fake!
I’ve only pointed out that things don’t tie together - which could be a clerical error.
Time will tell.

Phil @SkyJumper
Have bought from Picstop ebay shop on 4 previous occasions.
You will have no trouble with them at all, I am sure you will receive the correct card, if not, you won’t have any problems with them if you wish to return or obtain the correct one.
As Dave states, most likely a typo on the listing.
Let us know when it arrives,