Goal is to fit multistar 4000mAh 3S 11.1v battery. These batteries have a decent capacity with minimal weight and dimension gain. 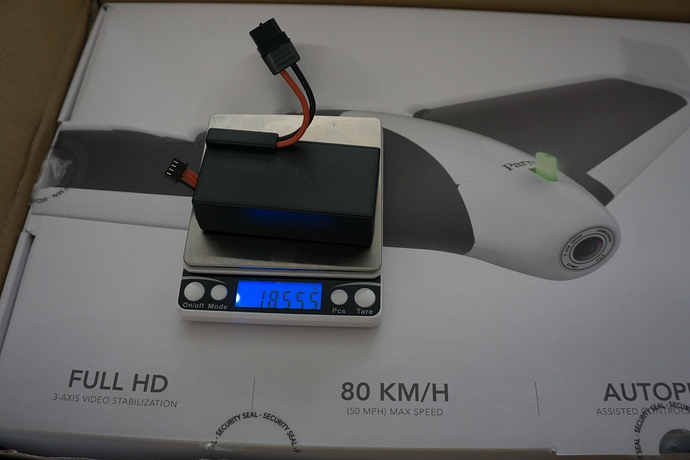 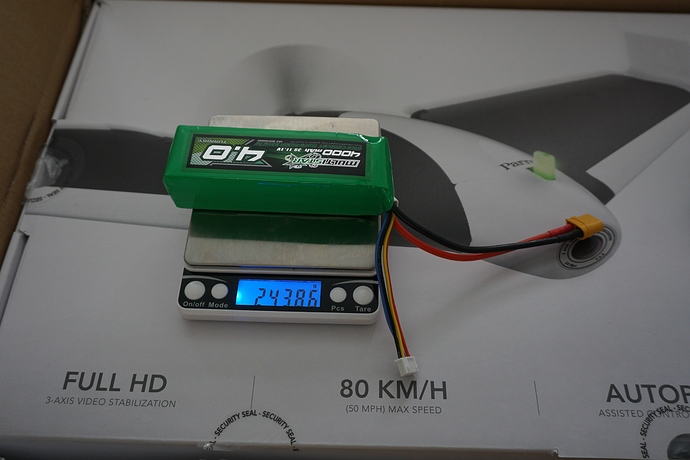 This is the standard battery bay. If you look where I marked the yellow line the body has 2 layers of polystyrene. Its important to leave the bottom layer intact as cutting down to label depth takes you very close to bursting through. 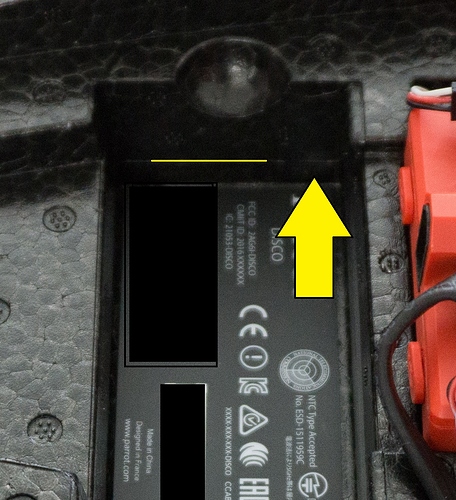 This was my first attempt and removed the step which I later glued back on. 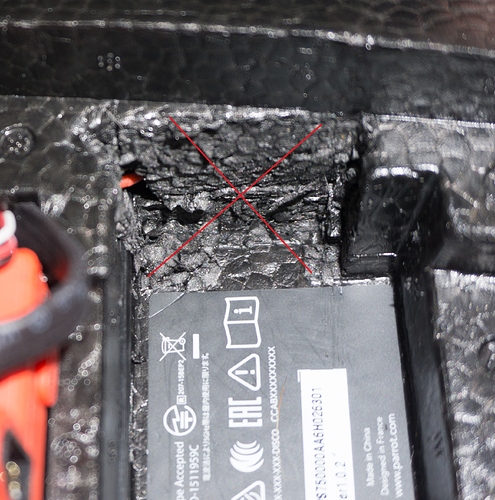 I have marked where I made my cuts, measuring width of battery and using that as datum. Cut a straight line so cut out is parallel. You do not want to follow profile of cover. Just cut as deep as step in polystyrerene and that section should come out in one piece. 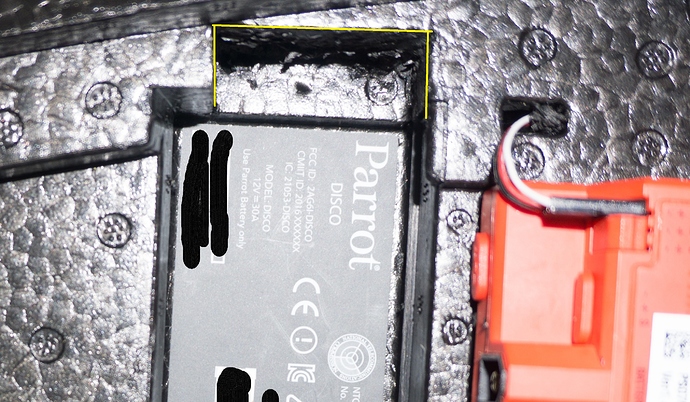 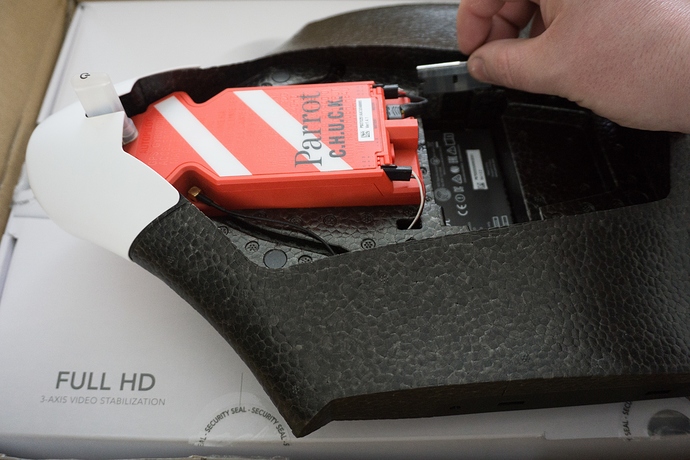 You will find that because the cables on battery make one edge not straight you might want to make the extra cuts on the side without motor cable. You may expose a cavity for cables but as long as you are not cutting to the profile of lid you will not hit them.

Take it nice and easy, you can always take more off but cant but it back on. A tight fit is preferable.

You can add a strip of insulating tape to tidy things up. 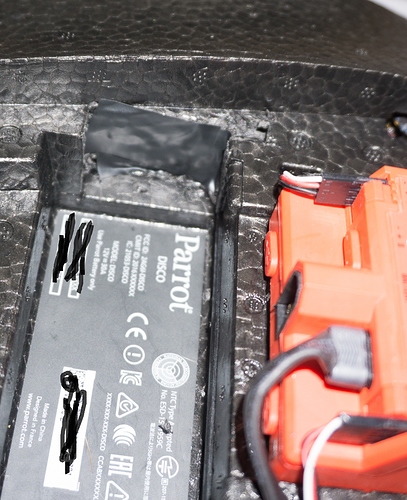 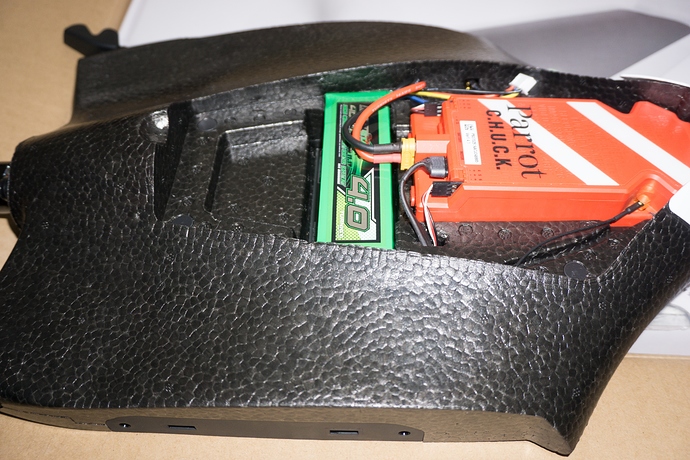 But you will find cover does not sit flush. 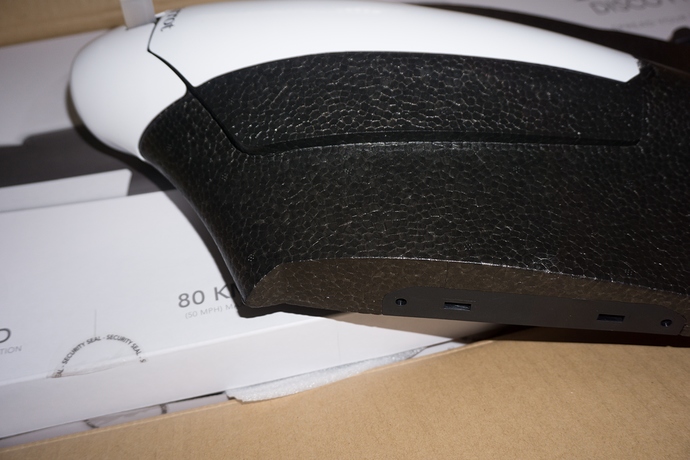 Make a few cuts to the cover, one side longer than other to accommodate cables. 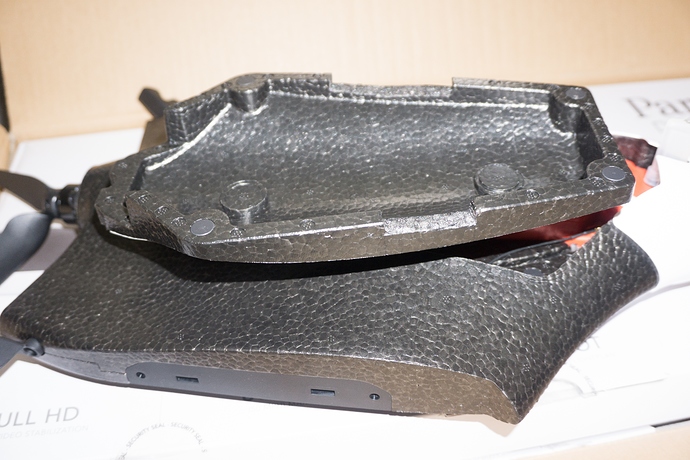 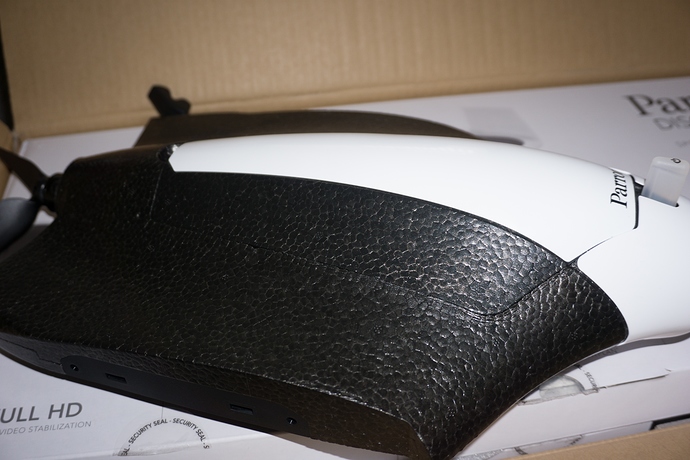 Charged on the stock disco charger no problem at all.

Will update on first flight.

Excellent, I’ll do mine when I decide which RC RX to fit.

36 minute flight, quite windy and “landed” with 58% battery.

Completely misjudged landing though and ended up in a fence. No damage apart from few scratches.

Need to do an endurance test in loiter mode and check out discharge curve.

And I think I’ve made a big error with footage.

Was an 18 waypoint mission. At waypoint 7 I wanted it to point down 15 degrees. I assumed it would reset at the next waypoint. The drone was gone for a bit and when it came back in range all I could see was sky.
I had set the tilt to-15 and I think it’s remained that way for rest of flight as it was not told to go back to zero at next waypoint.
So 2 bad assumptions. Negative means down and that it will default at next waypoint.

Would have got some cracking footage around trump turnberry.

I’ll know for next time.

Are these planned missions saved @callum?

Can you make a quick tweak to that mission and send it off to try again?

Great results from the battery though eh!

Yeah they are saved.

I just watched the video back and its not what I thought. Its made its way 80% back to me with video at correct angle.
Right around the location Id expect it to reconnect and where it disconnected the video pitches up.

I was a bit panicked at that point and think I’ve pressed something on the controller.

Focus was an issue again. It started off alright and degraded over the flight. I’m convinced its temperature related now. Bit of grain as well with the low light.

More of a good weather drone for best video results I think.

So 20km on half a battery. If id maintained altitude and no wind would be a lot more.

It looks like the first section was into the wind. Same air speed and lower ground speed.
Way back was with a tail wind so less air over the aerofoil and more power required to maintain lift.

So looks like in automated flight it maintains air speed. Flying into a headwind will reduce ground speed but flying with a tail wind increases ground speed and might use more power.

Took quite a few spotters today to pull this off. Put up flight on YouTube for a few hours.

You can see difference of focus at start then gradually dropping off.

Great footage nonetheless. Brilliant stuff mate, you are inspiring me. Looks like a great location to send it off for a solo adventure

Yeah it’s a good bit to fly. I stay close to the coast and have a good stretch to choose from.

I’ve ordered the parrot bag from Amazon, not in stock but definitely need it.

Little tip, this stuff is awesome for fixing any damage if you fly it into a fence like I did. 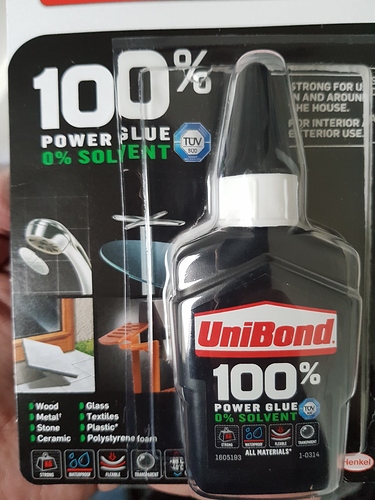 Very interesting, you’re really getting on with that Disco now.

So I was looking to buy another couple batteries for the Disco.

Cant find the 4000mAh multistar batteries anywhere, must be discontinued.

The multistar seemed more compact than others on the market at the time.

Need a suitable alternative. Any recommendations on a 3S 4000mAh lipo with similar dimensions to the multistar?

What were the dimensions?

These batteries were/are ideal for endurance flying when current draw is low as they are light and compact due to their low C Rating. This is why the Multistar batteries were Hobbyking’s most popular line of batteries. There are some opportunists on eBay and Amazon selling them but are asking far too much.

I think Hobbyking are on their last legs judging by the lack of stock in all warehouses and next to no presence, compared to a few years ago, across all forms of social media.

Another option is to use diy packs made up of 18650 LiOn cells with the Disco. The lower minimum discharge rate of these cells is both an advantage and a disadvantage. The advantage is they could provide longer flight times but the disadvantage is that the LVC will still treat them as if they were LiPo’s.

So I was looking to buy another couple batteries for the Disco.

Cant find the 4000mAh multistar batteries anywhere, must be discontinued.

The multistar seemed more compact than others on the market at the time.

Need a suitable alternative. Any recommendations on a 3S 4000mAh lipo with similar dimensions to the multistar?

Just browsing the HK site and I think they’ve dropped the Multistar brand and instead wrapping the 4000mAh and 5200mAh low C batteries in the blue Turnigy wrapper. 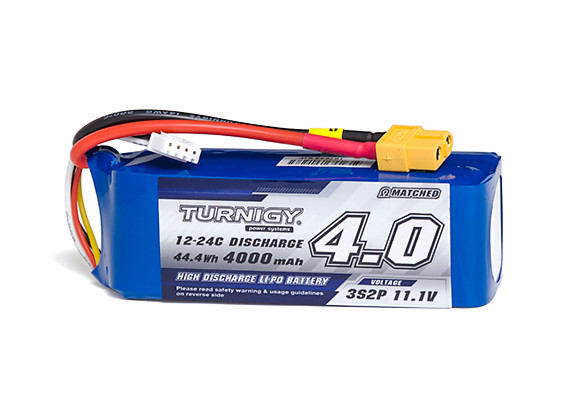 I did look at them but considebarly larger and 100g gram heavier.