Was hoping to get some insight from some more experienced members. Near where I live, part of a large open beach is in the extent of a small arms range (Tregantle), during non firing times the public have access to the beach, and the permissive path that runs through part of the ranges (although most of the actual firing range is behind a second fence).

I can see that generally these sites are listed with a caution on DroneScene, and a warning on DJI GEO.

Except for when the range is live (obviously), this would be a great site to safely practice in as it’s generally very quiet (by virtue of having to go down a steep cliffy parth) and open, and I wondered if you needed to phone up the range (same as you would to check firing times) for permission to fly, or if it was de facto allowed when the range is not in use the same as public access is allowed?

Be great to know if anyone has experience with similar sites, thankfully the SW is not short of large open spaces so lots of alternatives this is just a nice easy spot for me to reach.

Just to clarify, I’m talking about flying over the beach segment (blue below) which is the overshoot for the range and is still in the red flag area during firing times, not over the MOD buildings and firing lines themselves (red below). Excuse my very poor artistic skills 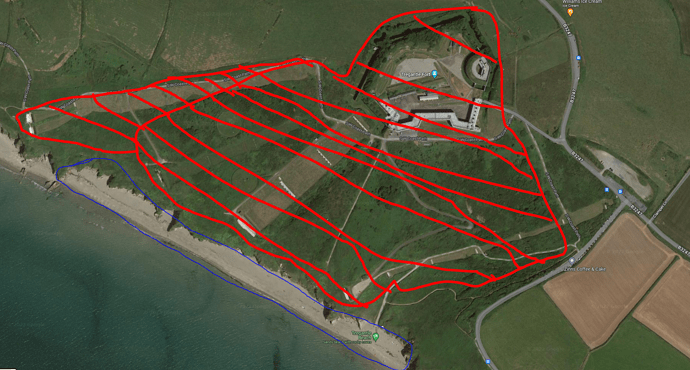 I’d say you are safe to fly there, no ‘real’ restrictions on DroneScene.

Perhaps give them a ring

As Chris says, give them a ring. Or email so that you have a paper trail if someone questions your right to be there.

There’s one by my house. Google the shooting times. They are publicly available. Just avoid those times.