I’m creating this thread in response to a wish Karl, @notveryprettyboy, had in another thread, but it might be interesting to others that could use this kind of test equipment.

When I was gainfully employed I was using spectrum analysers that cost more than the house I’ve been in for the last 27yrs. These were incredible pieces of kit but well out of the reach of all hobbyists, but in my twisted thinking I always believed my life was not complete without a spectrum analyser of my own.

There are used options available on eBay but spending close to £1,000 on an old clunky, and very limited, SA is not a route I recommend for someone wanting to add one to their workbench. However for around £100, or more if you go with the OEM version, you can get a very usable 1MHz-6GHz (with reduced performance down to 50KHz and up to 10GHz) software driven spectrum analyser. This box of tricks goes by the name of the “HackRF 1”, which started life as an opensource project developed by Michael Ossman, initially released as a Kickstarter, and then distributed by GreatScott Gadgets.

The Great Scott Gadgets version is the priciest of this Opensource device and many much cheaper versions are available off eBay, Banggood, Amazon, etc. There’s also an option Portapak, which as its name suggests turns this device into a fully portable Software Defined Radio, including a full featured touch screen and internal battery.

Where the full potential of this device is realised is when it’s connected to a PC. There are quite a few programs for Windows but most of these are orientated to the radio ham and shortwave listener, but there is one package, simply called HackRF Spectrum Analyser, available for Windows and Linux, which allows you to run the HackRF as a realtime Spectrum Analyser which can display the whole bandwidth and tune any bandwidth and frequency between 1MHz and 6GHz. Below are two screenshots from this program illustrating the difference between Spectrum DSMX, top,and FrSky D16, bottom. 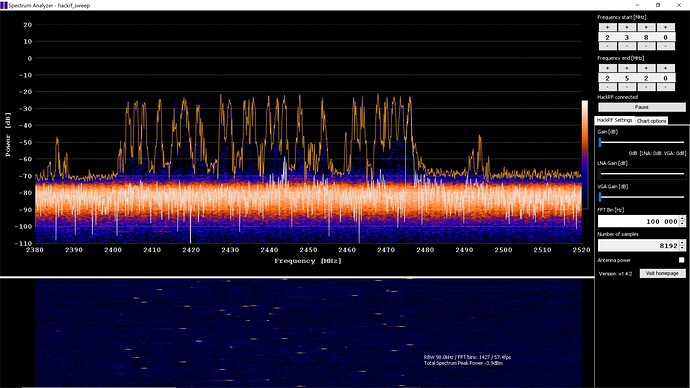 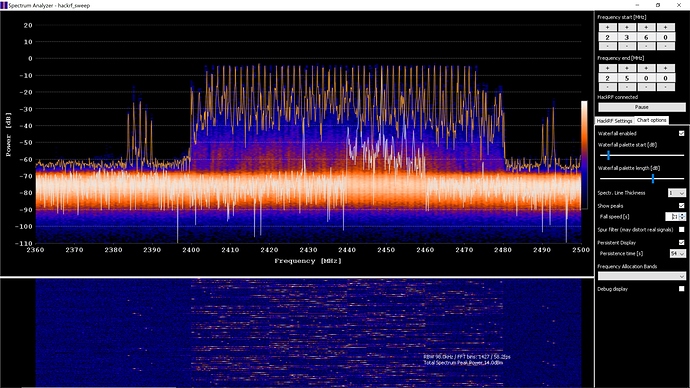 The HackRF 1 is not just a receiver as it also has transmit capabilities across its full range. It’s possible to record signals and then play them back, on any frequency the user wishes. To do this effectively it’s best to use it on a Linux platform with a package called GNURADIO.

GNURADIO is a package whereby the user can configure the HackRF 1 to replicate a simple Broadcast FM receiver through to such things as a GSM base station, digital trunk mobile radio, television, etc, by the use of software demodulators and other complex virtual circuits. It sounds complicated, and it is at first, but there are many tutorials on the use of GNURADIO with the HackRF1 on Youtube, including a great series for the absolute beginner by Mike Ossman himself.

I’ll admit it’s not a device that would get the general drone community excited but next to my Fluke Multimeter it’s the second most used piece of test equipment that I use. Talking of drones some have used the HackRF1 to hack and take control of their own drones, again videos on Youtube demonstrating this.

I think I will build this on payday. Thank Nidge, the knowledge you give freely is

My pleasure. If you want to experiment with GNURADIO cheaply you can use a DVBT dongle, often referred to as the RTL-SDR. These can be bought for £10 or so. They have a limited frequency range of approximately 50MHz to 1.7GHz and can only sample small bandwidths compared to the HackRF (about 2MHz). You can also use them to decode ACARS and ADS-B signals, free Windows software is available with a simple search.