Following the silly crash I had with my Mini 2 last Sunday 2nd Sept due to the “Quick Shots” feature, I sent the drone to Dji the following Monday 3rd of Sept, they received it yesterday 6th and posted a complete new one with another serial number today 7th Sept, and I already have an UPS email confirming delivery by Monday 10th, I mean that was fast I was expecting at least a couple of weeks if not more to be pessimistic, but wow that Care / Refresh + is worth every penny. 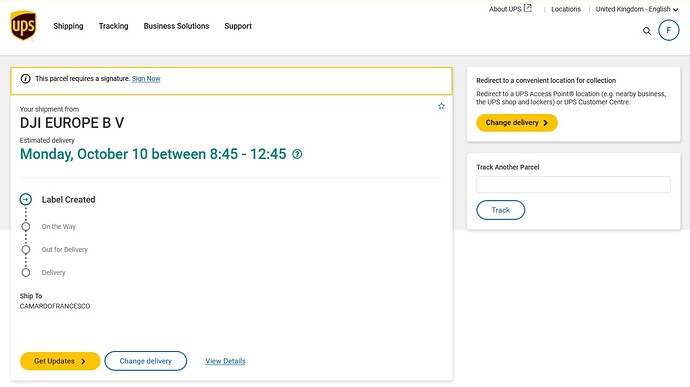 DJI send out refurbs, it’s how they turn them around so quickly.

Their refurbs are usually ok though. They’re boxed and sealed like most other manufacturer-refurb devices and are still warrantied.

I think we’ve only ever had a couple of reports of the refurb unit suffering a different problem from the drone that got sent in.

Yes I had to pay the £45 excess, but better than to buy a new one I suppose, aye?

A friend of mine crashed his brand new mini 3 on first flight by trying to hand land (clipped his finger, and it dropped to floor). The flimsy gimble broke from 1 meter off ground… Anyways he sent back to DJI (care refresh), they sent him back a new one, great. No battery returned (not sure if you meant to send battery with…) So he complained, and he got back a brand new mini 3, controller, and battery… So he now has 2 DJI Mini 3s! Service…

When you fill the return form, they ask you if you want the battery replaced / repaired too as well as the drone if you tick no then you don’t need to send it. But your mate got a very lucky result.
I have just spoken on the phone to the help line in Germany and they told me that due to the fact that my Mini 2 was so new that they are sending me back a new one not a refurb.

Yeah very lucky. I’ve never had to send a drone back to DJI yet (touch wood), but did think battery might be something you don’t send.

I did try and get a very good deal off of him, but he’s gonna sell it close to RRP… I can’t justify that!

I have to agree. When I ordered my Mini 3 Pro the second it was available, I procrastinated for ages on whether I needed Care/Refresh. Despite having flown my Phantom 4 for many years without any significant incident, I thought maybe I should just in case. I’m glad I did.

So my new Mini arrives. First flight - straight into a fence, breaking off one of the arms. Completely my fault. Followed the instructions and I was back up flying in about a week, before most people had even received their original order.

I had to pay the £65 excess, but as far as I can tell, that would barely cover the cost of express postage in both directions, so not bad at all. My only very minor gripe is that they request you send it back in the original box and they return it in a different box without space for the remote or accessories. I like to keep my original boxes for resale time.

Another thing I just learned that might be helpful to point out. I recently decided to see how much it might cost to get my rather badly damaged Mavic Air 2 fixed up, so I went through and got the address etc. to send it to the Netherlands. Figuring there’s no point to waiting, I got the Royal Mail shipping sorted, and sent it off this morning.
About 4 hours later, I got the emails from DJI & UPS saying they’d created a shipping label for me, at their expense, to send it to them that way, even though they’re under no obligation to do so, but ‘considering that you are a loyal customer, to improve your experience, we have applied for a Free shipping label for you to send in the device.’ I’ve replied saying no use for that now.

So, point is, if you’re sending in a repair, unless it’s terribly urgent, you might want to hold off on shipping it for a day or two, after filling out their forms.

ETA: P.S. Mine was due to Quick Shots too. Welcome to the club, DroneX!