I am looking to purchase my first drone. Can anyone please advise as to whether the Qinux 4K drone is worth purchasing? Any genuine pros and cons?

Not many owners here I’m affraid

Have tried search no luck, has any member had any dealings or experience with the Qinux drone. Are they any good / easy to use, it comes with a KY FPV version 1.6.5 to run on android but have difficulties in loading, any help / advice would be appreciated

Can anyone please advise as to whether the Qinux 4K drone

Not a good review 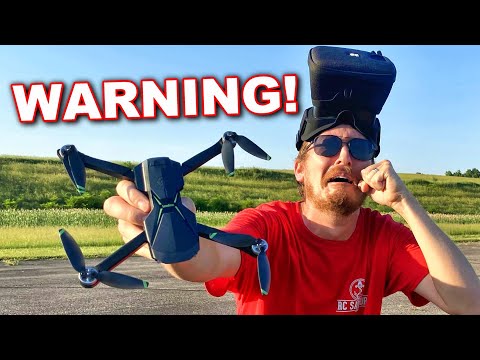 There are a lot of relatively cheap drones out there and most of them are cheap for a reason. When I first started I spent a lot of time researching and pondering and generally trying to weigh the pros and cons. Then I bought the bullet and bought a newish (then) DJI Mavic Air.

It took my budget to the limit and beyond but it was the best buy then for a beginner and it has stayed with me as my capabilities have slowly grown. The fact that it was far better at making decisions in the air than I was has saved me on a couple of occasions!

DJI are almost ubiquitous. They are the market leaders and that is for a reason. Their aircraft are good. There are niggles, there have been problems but there is a vast userbase out there (and in here!) to help each other out with overcoming any hassles.

The fanbois will leap at any new piece of DJI shiny, with the welcome result that the immediately previous and still perfectly adequate models are available second hand.

That could be another cause of grief - eBay has a proportion of scammers amongst the mostly honest selling population. Get advice, such as freely given in here, before committing to a purchase. Better still use the for sale and wanted category here. From my dealings I have found the prices to be realistic and the sellers to be excellent in terms of item description, speed, service and packing.

If you are having difficulty in finding reviews then there will be no help available for a beginner. Avoid!

Hi Bernard, welcome from the Black Country.
How much have you got to spend is the first question?
Up to £200, you’ll get one of the “generic” Banggood type drones, not very good and God help you if you’re looking for spares,
£200 ish will get you a bare DJI Mini 1 with 1 battery (easily obtainable) and a controller.
£250 ish will get you a Mini 1 with a Fly More package (extra batteries, bag, extra props)
£300 ish will get a Mini 2 with controller and 1 battery
£350 - 400 will get a Mini 2 1 battery and controller, with Fly More package (2 spare batteries, bag, extra props)
There’s always somebody flogging Mini 2s on here, mine is (wink wink). Very good starter drone, good camera and dead easy to fly.

These prices are approximate.

To be honest there’s very little choice when looking for a decent consumer grade drone these days. The only manufacturers I would recommend are DJI and Autel as they are the only ones still making products for the consumer.

There are many cheaper no-name drones out there but they lack any customer support, and generally once purchased their next destination will be into the nearest landfill site.

You only have to look on Ebay in the camera drone section to find that nearly 95% of drones being sold are DJI. The other 5% or so are from manufacturers that have either pulled out of the Drone market in the last five to eight years, or those that barely make the level of toy grade.

For anyone wanting their first drone I’d always recommend the DJI Mini2 as:

It’s reliable.
Has a very good camera.
Can be flown just about anywhere, within reason.
DJI have an extensive dealer network.
Holds its resale value.

I wish there was greater choice but the consumer drone market peaked around 2018 and after that many manufacturers either concentrated on commercial applications or pulled out of the Drone market altogether.

The drone looks terrible. The website has scam written all over it. These are not real people or genuine reviews. 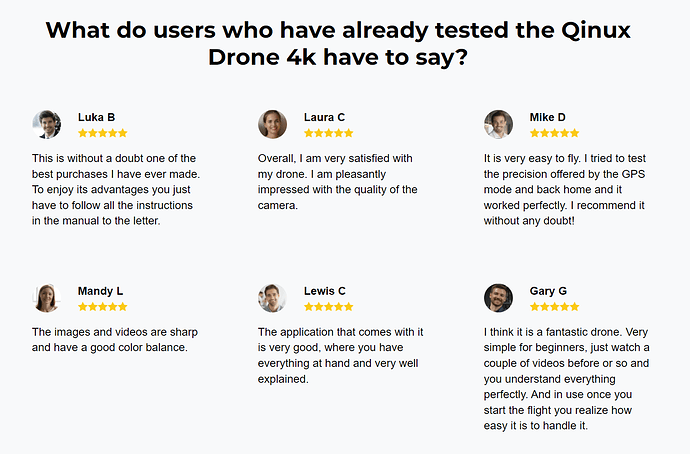 On top that, their HTML skills suck big time. Just refresh this page and watch these fictitious random figures jump up and down … 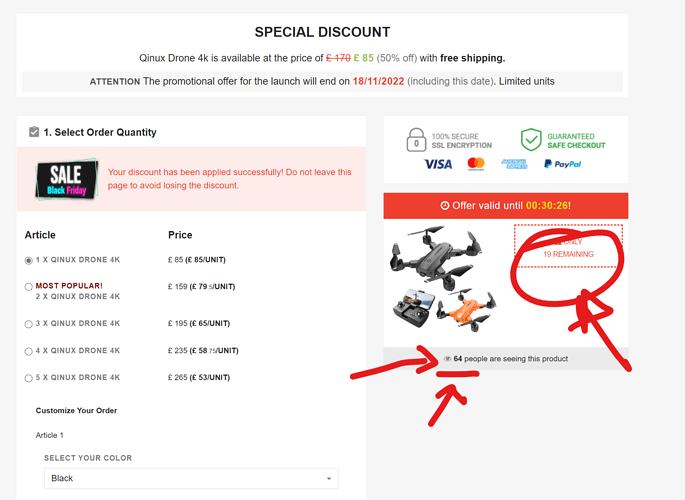 It’s complete bollocks. And if that’s not enough for you to run a mile in the opposite direction …

The company is Ecomerzpro and have shocking reviews. 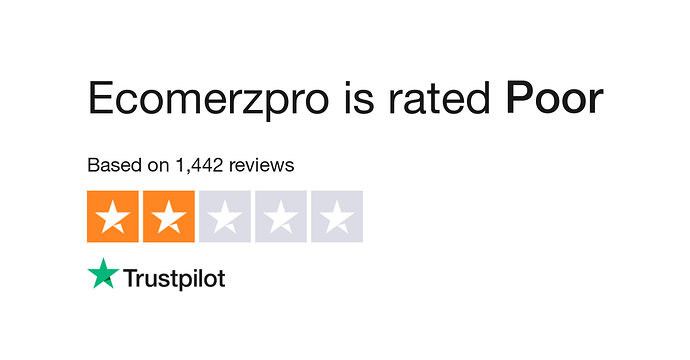 Do you agree with Ecomerzpro's TrustScore? Voice your opinion today and hear what 1,442 customers have already said. 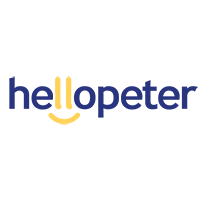 Any genuine pros and cons?

Thanks for the heads up. Definitely one for me to avoid.

Thanks for the heads up

No worries. The posts above mine is great advice as to recommendations.

Well, it certainly looks as if the DJI mini 2 has excellent recommendations. Obviously, I will not be looking at a Qinux. There is one other though that I would appreciate opinions on. That is the SG906 Pro2 drone. I seen several good reviews, but hesitant about possible fake reviews.

I would still recommend spending the extra and go for the Mini2.

Looking at the footage that comes out of the SG906. As an example in one video the sky was blown out while the ground was very underexposed, and the darks were very noisy. This is typical of a very cheap camera. Also there was significant jello in the shot.

I also observed poor position hold. The drone was obviously toilet bowling in a hover. This is a result of a poor performing compass coupled with contradictory heading data from the GPS.

For control and video downlink the system relies on a vanilla WiFi connection. This is prone to providing poor video quality and control connection, especially in areas with high WiFi activity.

So why spend the extra on a Mini2?

The Mini2 uses DJI’s patented Ocusync technology. This is a very robust connection that provides a high definition and fast frame rate video downlink over a great distance.

The camera, while not as sophisticated as that on the Mini3 and Mavic3, has excellent dynamic range and low light performance.

The drone is as steady as a rock. I’ve flown mine in 25mph+ winds, and even though the drone itself was shaking like a mad thing it held its position and the video was still just as steady.

Because it’s flying weight is less than 250g it can be flown freely in areas where you would receive a heavy slap for flying the SG906.

Most know I’m not DJI’s biggest fan. They’ve permanently scarred me in the past. I also purchased the Mini2 because I was heavily medicated and it was a boring wet Sunday afternoon. However it has now taken the place of my favourite grab and go drone, the Parrot Anafi, and coupled with the Litchi APP it is a very powerful little object of desire.

The Mini is slightly outclassed by the Mini 3 which has led to a lot of Mini 2’s on the second hand market. They are a very capable and portable aircraft free of many of the restrictions of use that over 250g aircraft suffer.

too am not a DJI fan but, in this case, the purchase of a Mini 2 is a no brainer. Go for a kit with several batteries, if you only get one it becomes frustrating waiting for a charge between flights.

Watch videos - those by Ian in London on YouTube are well worth subscribing to.

And ask questions and post pictures and videos in here

A very useful comparison Nudge. Most grateful. I think I’ve decided. I am in the process of selling my fz330 Panasonic camera and then I’ll go for it. Thanks again.

Hi @bernardsullivan, I started my Drone adventure just under a year ago and went the cheap route with a Holy Stone HD175D, hard to control as it was standard wifi control, camera wasn’t great, but I realised I loved the flying. So I bit the bullet a bought an Air 2S, awesome piece of kit and love it. I also wanted something in the sub 250g category to take advantage of the advantages so got the Mini 2. I now fly both and to be honest the Mini gets the majority of the air time as it easier to throw in a bag for the day. The mini 2 is an awesome drone and camera, well worth the little extra outlay and holds its resale price respectfully.

Oh and just to add, I have never flown the Holy Stone since. It just does not compare.