It seems strangely hushed in the ChallCom bunker’s main machine hall. Once home of the mighty Votalyzer ™ the chamber echoed to the hiss of steam , the thunder of pistons and the whirring and clacking of gears, pawls and ratchets. Men in blue boilersuits and their white lab-coated supervisors scurried about, making an adjustment here, making an observation and a note there, checking bearings and gearing for overheating or misalignment.

The atmosphere was a heady mix of humidity, heat and the pungent , sharp smell of Gunderson’s Patent Number 3 Heavyweight Machine Oil. Now all the bustle is gone, the floor no longer vibrating as the machine ran up to full speed.

The vast space has been cleared of the wreckage. Walls and ceilings have been repaired and replastered, then painted in a cheerful off-white. And nestling in a corner is our newly installed, compact all-transistor, solid state DigiPoll, a marvel of miniaturization that has just finished its first live production run. 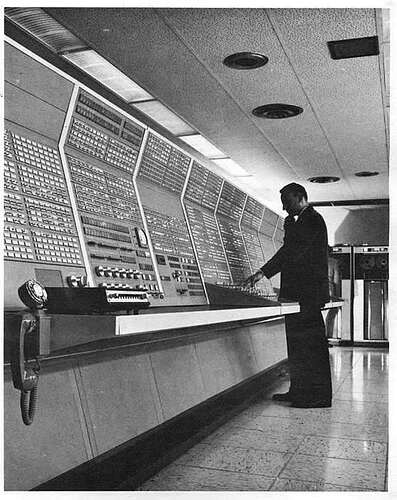 Previously a team of sweating engineers would have had to pull the plate from the Votalyzer ™, fettled and polished it then carefully installed and aligned it on the lithographic press so that a proof could be pulled and, still wet, scanned then, following adjudicator approval, released to the competition co=ordinators so that the result of the vote might be promulgated.

Tonight one person (see picture above) is able to view the poll result, check its validity and broadcast itto the waiting nation.

And the historic first result from the DigiPoll, the subject of the Reason to Fly (RTF) competition from June 5th to June 18th is , 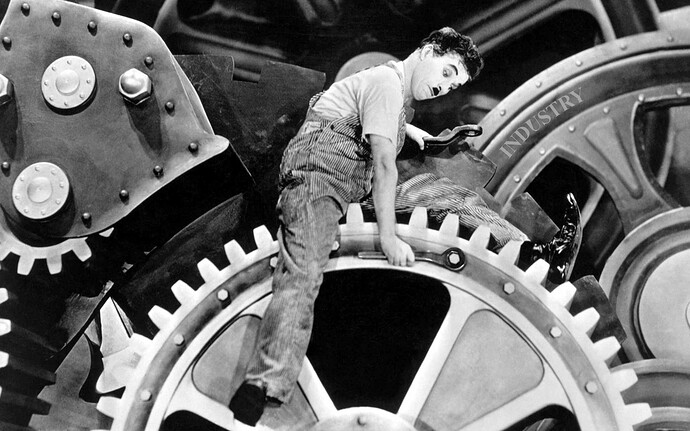 Top tip - check the rules each time a new RTF competition starts. They do change. Your entry may be disqualified if you don’t.

Ignorance is a deficiency, not an excuse!

**The requirement is to submit an image, either a photo or video, to illustrate the subject of the competition. The subject for the competition running from 00:01 Sunday June 5th to 23:00 Saturday June 18th 2022 is Industry

If a man bets you five pounds that he can make the Jack of Diamonds leap out of a pack of cards and squirt lemon juice in your ear, do not take the bet. Else you will end up five pounds poorer and your ear will be wet.

And the historic first result from the DigiPoll, the subject of the Reason to Fly (RTF) competition from June 5th to June 18th is ,

Should there be something here?

Should there be something here?

We did provide you with a still of Mr. Chaplin in one of his most famous films with a curved text “Industry” artfully but none too skilfully added to one of the gearwheels via GIMP. Is there something else you would prefer?

We did provide you with a still of Mr. Chaplin in one of his most famous films with a curved text “Industry” artfully but none too skilfully added to one of the gearwheels via GIMP. Is there something else you would prefer?

Clearly I have been celebrating the Platinum Jubilee too much

We did provide you with a still of Mr. Chaplin in one of his most famous films with a curved text “Industry” artfully but none too skilfully added to one of the gearwheels

Agsinst the rules to modify a picture.

Are mages in the photo mandatory or optional?

Agsinst the rules to modify a picture.

Thank you for your input, Colin,

Are mages in the photo mandatory or optional?

No, but you must supply them with the appropriate information as requested in the rules. Then they can impart it to us. That is if your mages, wizards, necromancers or other charlatans survive the posting process.

At least you read that far in the amended rules …

Looking forward to this one. So many different interpretations of Industry. Be good to see what things people come up with. Should be another entry heavy one. Weather permitting.

Here’s one to get started…

Woodsmith Mine, largest polyhalite/potash (fertiliser) mine in the world a mile under the North York Moors near Whitby. I guess that counts as industry. They plan to mine it and transport it 22miles to Teeside passing under Whitby and sell it for squillions around the world. The whole site will evenutally be underground and what you see here will return to wild moorland. 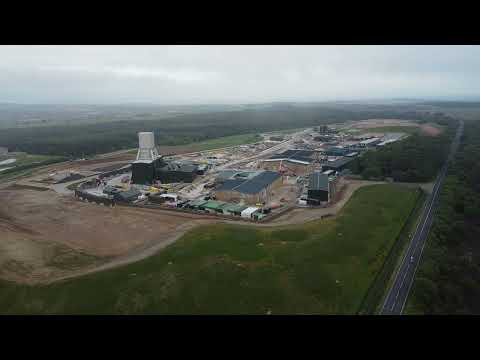 Taken a bit too late in the eve 7th June with my Mini SE. 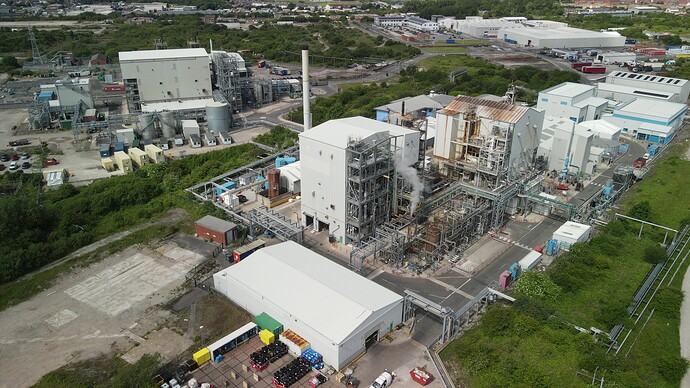 A “BRANCH” OF THE FORESTRY INDUSTRY
Sorry couldn’t resist that title…Taken Tuesday 07/06/22 at approx 20.00 hrs with my Mavic Air2
…This is AJ SCOTTS timber mill near Wooperton Northumberland they have been in business since 1960 processing home grown harvested timber from sustainable managed forests providing sawn timber mainly to the fencing, pallet & packaging sector…they are also one of the country’s leading hardwood round timber merchants , the site covers 40 acres. 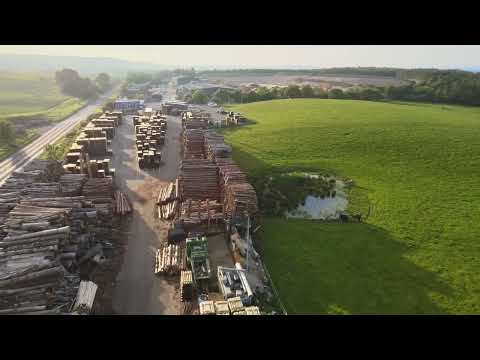 I have installed site cabins in here. Ballache of a place to work in.

I have not added my entry to drone scene ….I can’t imagine anybody else wanting to fly at this location or any of the others so far …2 possible bonus points down the drain

Forgot to mention for the chemical plant pic above - TOAL location previously loaded into Dronescene Where can I fly my drone in the UK? - Stanah - Rivers and Canals in North West

Colas plant and tanker yard, Warrington
11/06/22, approx. 17:25PM
DJI Mini 2 with CPL filter
This photo is of the local Colas plant and the tanker yard next door over which sells/rents out tanker trailers for trucks. You can often hear activity on the site from the park as the asphalt is processed or loaded onto vehicles. 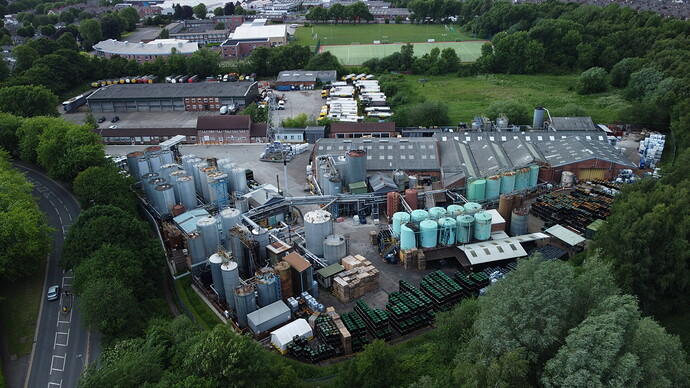 Lee Moor sits right on the edge of Dartmoor and actually cuts into the south extent slightly (making it exempt from the no drones by-law). Compared to the surrounding natural beauty, it’s quite the scar on the landscape although it is striking in it’s own way. Whilst this is the main pit, there are a number of other sizable excavations nearby, either for china clay, or tungsten. Wasn’t brave enough to overfly for the ideal shot, but got fairly close. 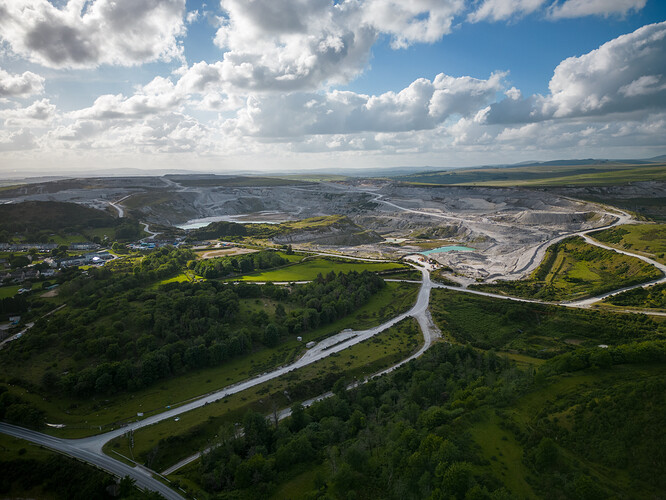