Sherburn Aerodrome - A challenge too far

The latest site where I intended to film was near Sherburn Aerodrome near Leeds. It’s the first time I’ve had a site that falls within a Flight Restriction Zone.

I naively figured I could work something out with the aerodrome and claw out an hour or so for me to fly. I’d be coming up from Oxford to do this, so quite a lot to manage with the weather at this time of year.

When I made the initial enquiry, it seemed eminently doable as long as I gave advance warning. We’ve spent a few weeks monitoring the weather and waiting for an opportunity. Our flight paths have been worked out and programmed into Litchi. Hotel booked. Batteries charged. We’re ready to go…

So I called the chap today to confirm tomorrow, and I am now told this will not be possible. The site is at the end of their most-used runway, so basically, it isn’t possible. They are a busy aerodrome where their members can apparently come and go as they please, so it’s not like there is a ‘slot’ of time available where I could shoot.

I wonder if there are any permits that would allow this sort of thing? This is the area I wanted to film. 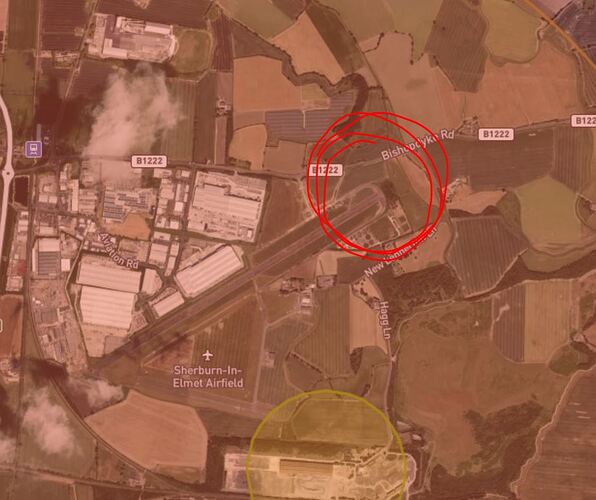 Very unlikely as a hobbyist. Even as a GVC holder I think you’d be hard pushed to obtain any sort of permission to fly in the area you’ve circled.

Sherburn Aerodrome is busy, surprisingly more so than Leeds and Bradford Intl.

I flew at the end of an aerodrome runway recently. When it was out of use due to a firework display!

I think you’ve zero chance of blocking the aerodrome to its legitimate users. Your only hope is to agree a time when there can’t possibly be any flights.

I’m afraid if the aerodrome say no, that’s it. Unless you can persuade them otherwise.

I’m a retired air traffic controller and it’s quite difficult even for me to get permission from my former workplace to fly withing the 5km drone restriction zone, even though I have the relevant (IOM) CAA permissions to fly there. They will never admit to it, but from talking to various current controllers there, the rule of thumb seems to be no drone flying when there is a manned aircraft within 20 miles of the airport. It can be done and I’ve done it, but needs some careful working out of times, Sunday morning is generally the most likely as there are few commercial flights and the local light aircraft pilots don’t seem to start flying until around late morning/lunchtime. A lot depends on the individual controller, I was once told that I couldn’t fly at a site 4.5km from the airport, I was going to be not above 200ft and not in line with any runways, because there was one light aircraft in the visiaul circuit. The particular controller wouldn’t even talk directly to me as ‘he was too busy’ (with one aircraft!). Other controllers are much more accomodating

Where abouts were you hoping to fly , Sherburn is 15 mins from me

I live in Sherburn and for some weird reason my Air 2S is not limited as my older Mavic Pro was, so I did a couple of videos earlier this year before I did my A2 cofc and then realised I should have asked for permission.
You might have dodged a bullet this weekend as the wind could get as high as 100 mph, saying that the runway is open all day and planes come and go all the time, I live 2.5km as the crow fly’s from the aerodrome