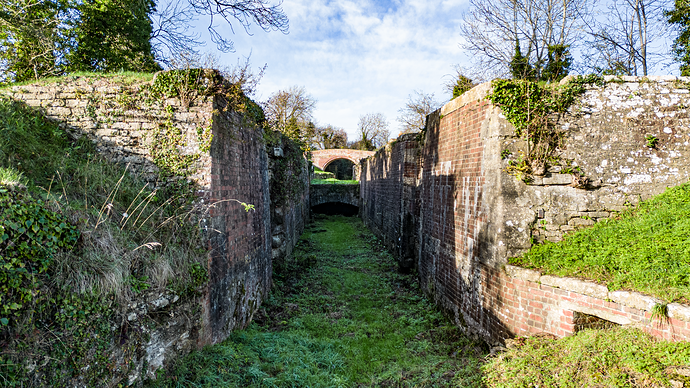 The Thames and Severn Canal is a canal in Gloucestershire in the south of England, which was completed in 1789. It was conceived as part of a canal route from Bristol to London. At its eastern end, it connects to the River Thames at Inglesham Lock near Lechlade, while at its western end, it connects to the Stroudwater Navigation at Wallbridge near Stroud, and thence to the River Severn.

It has one short arm (branch), from Siddington to the town of Cirencester. It includes Sapperton Tunnel, which when built was the longest canal tunnel in Britain, and remains the second-longest complete tunnel. There were always problems with water supply, as no reservoirs were built, while the summit section near the tunnel ran through porous limestone, and there were constant difficulties with leakage. Competition from the railways took much of the canal's traffic by the end of the 19th century, and most of the canal was abandoned in 1927, the remainder in 1941.

Since 1972, the Cotswold Canals Trust has been working to restore both the canal and the Stroudwater Navigation to navigably re-link the Thames and the Severn. A number of the structures have been restored, and some sections are now in water. A major step forward occurred in 2003, when a bid was made to the Heritage Lottery Fund for £82 million to restore both canals. The bid and the project had to be split into smaller sections, but £11.9 million was awarded in 2006 for phase 1a, which with matched funding will restore from 'The Ocean' at Stonehouse to Wallbridge on the Navigation, and from there to Brimscombe Port on the canal. In 2010, British Waterways gave Inglesham Lock to the Trust, and the Inland Waterways Association mounted a national campaign to fund its restoration (and 420 yards (380 m) of canal above). To re-open the whole canal some major engineering obstacles will need to be overcome.