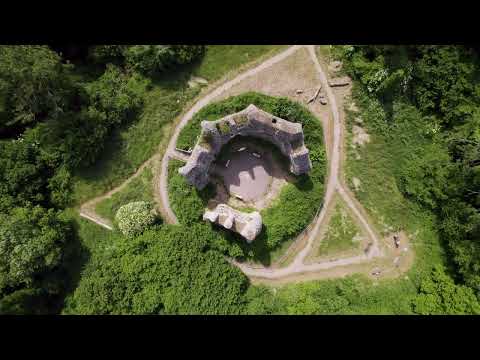 This location has been recommended to fly your drone in the Castles and Fortifications category in the South East region.

TOAL was from within the site itself.

Permission was obtained from The Hampshire County Council prior to flying and and from RAF Odiham Operations as it falls within the FRZ of RAF Odiham.

Odiham Castle lies on the banks of the Basingstoke Canal, but was built long before the canal existed.

The Castle, with its surrounding defensive ditches, was built between 1207 and 1214. The site was probably chosen by King John as a convenient point between his strongholds at Winchester and Windsor. Odiham being a good stopping place on the two day ride between them.

Soon after it was finished in 1216, the castle suffered a two week siege by French knights. These knights were sent to support the Barons in their rebellion against King John after the failure of Magna Carta to bring peace.

The castle was granted by King Henry III to John’s daughter, Eleanor, in 1236. Two years later Eleanor married Simon de Montfort, one of the most powerful noblemen in the country. This union would have made Odiham one of the most powerful households in the land. Simon took a leading part in the rebellion against Henry III, eventually stripping the king of power and taking on the rule of England himself. He did not enjoy this power for long and was killed by supporters of the King after just over a year in power.

By the 15th century the castle lost its status as a royal residence and became a hunting lodge. During the following 200 years little was spent on the upkeep of the building. In its declining state it may have been seen as a source of building material and parts may have been used to build local houses. By 1603 it was classed as being a ruin.

The originator declared that this location was inside a flight restriction zone at the time of being flown. Permission to fly was obtained from RAF Odiham Duty Ops Controller. It remains the responsibility of any pilot to check for any changes before flying at the same location.

I live less than 1KM from King John’s Castle so thrilled to see an aerial photo. I’ve recently purchased my first drone so knowing that the council were amenable to granting flight permission is very encouraging. I’ve already contacted the duty officer at RAF Odiham, who was very helpful, so fingers crossed.

I hope you are successful however please note I had to provide the council with proof of my operation authorization and insurance policy before permission was granted by them to allow me to fly there for them.

You never know though they may be amenable if you have public liability insurance for recreational use. You should look into that if you don’t.

Hi There, that’s useful to know. I joined FPV UK so have public liability insurance as part of their package. I actually live nearby and can see the castle from my next door neighbours garden - VLOS might be a stretch flying from here though - plus RAF Odiham would still need to sign-off.
To be honest, I’m not in a rush to fly over that way, I’ve got more interesting projects locally in the pipleline that I think will be more rewarding.