Taking off from (and flying over) camp sites

Hi there, I am a new drone flyer and I am going to a camp site in Rosliston south Derby, however one of the camp rules is no drones allowed, am I correct in thinking if I go to one of the many public footpaths that surround the site I can launch and do a flyover of the sight with my DJI mini 2, this is not in restricted air space at all. Cheers.

There are two separate issues.

However, there is also a contractual issue. Presumably the campsite owner has banned drones because of nuisance or safety. They won’t care where you are standing: if the campsite terms and conditions give them a right to eject you, they could do so. Standing on a public footpath doesn’t change that.

There are two separate issues.

The first, around public footpaths, has been covered many, many (many) times over the years.

Most recently in this thread:

Has anyone seen this from MRMPW and what do you make of it? [Can you fly your drone on Public Footpaths, Land & Rights of Way | Mr MPW] I don’t know about anyone else but I just want to be able to go out, on a whim, with my Mavic Pro, take off, scoot around and come home without having to even think about having to organise anything else

Just a little pleasure without any mither. Is he just nit picking, please someone tell me he isn’t right?

The second, as @kvetner said, is around the camp sites own rules.

Most people go to campsites to relax, not to get buzzed by random drones.

You’ll not be popular with your neighbours

Food for thought… taken from link above… ta.

Judicial Ruling Director of Public Prosecutions v Jones and Lloyd: HL 4 Mar 1999.
‘I conclude therefore the law to be that the public highway is a public place which the public may enjoy for any reasonable purpose, provided the activity in question does not amount to a public or private nuisance and does not obstruct the highway by unreasonably impeding the primary right of the public to pass and repass.

I think as with everything drone flight related just use common sense. Yes TOAL from the public path baring in mind the legislative restraints outlined in that judicial ruling and when flying over keep it to a height where you know it’s not going to cause nuisance, harm or distress to anyone or thing and don’t hover for any prolonged period. That’s why the public scream privacy breach when they see one.

The issue of the camp site owner ejecting you or refusing you entry to their land is a tricky one in my book. If you’ve paid for a plot on which to stay then you’ve both entered into a contract and in order for him to break that contract by ejecting you or refusing you entry when in effect all you have done is broken a ‘rule’ they have no right to try and impose is dubious at best. I would argue that as he has no jurisdiction over what happens in the airspace above his land and thus has no legitimate right to bar you because you used it in a way he just didn’t agree with.

If you’ve paid for a plot on which to stay then you’ve both entered into a contract and in order for him to break that contract by ejecting you or refusing you entry when in effect all you have done is broken a ‘rule’ they have no right to try and impose is dubious at best.

Camp and caravan site contracts will generally include a nuisance clause allowing the owner to eject anyone they think is being anti-social, or who is breaking any rules they have provided to guests. That’s the key word, really: “guest”.

Mmmm, granted but surely any site contract clause would only be pertinent to residents and guests whilst on the premises. Are you a guest/resident at all times, on and off the site or only when on the premises? If it’s only when on site, which I’m pretty sure it is, then you as a non guest/resident at the time of potentially causing a nuisance cannot be punished as you haven’t actually done anything wrong to be in breach of that contract.

Its semantics I know but I’m very curious as to how this would actually pan out.

Are you a guest/resident at all times, on and off the site or only when on the premises?

It will depend entirely on what the terms and conditions say. From a random google:

4.1 We reserve the right of admission. We only accept responsible campers that are considerate to fellow campers/guests and be respectful of the environment.

That is about behaviour, not about where you are standing. It would be daft to suggest you could stand just outside the campsite fenceline shouting abuse at other guests and think you can carry on camping there.

In any case, I’d not imagine anyone is going to court to defend their view of a camping contract. Wheaton’s Law is surely the key thing here!

Stayed on a camp site last week where the rules included “No Flying of; drones, model aircraft or kites”. No mention of balloons so one of Mr. Cameron’s finest dropped in. Well it seemed he was about to but then he gently floated off again. 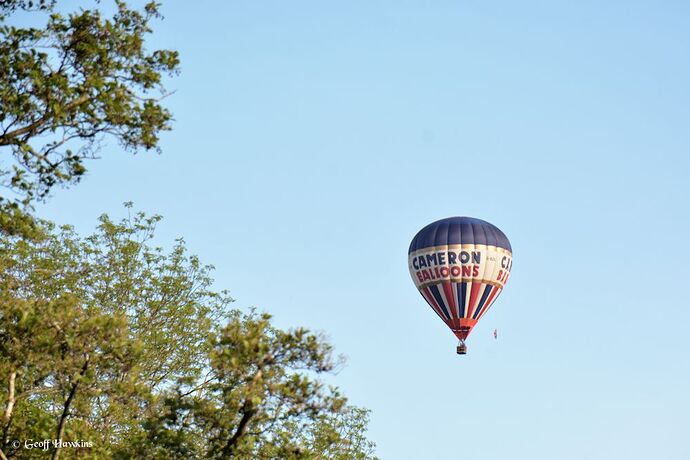 Thanks guy’s I did go off camp last night about 9pm still plenty light enough, launched from public footpath in a deserted field and went straight up to 350 feet and flew over the campsite and woodland, got some good video and although my wife new I was doing this she did not hear or see the drone despite trying to find it.
Mission accomplished I think, thanks for the replies.