Taking off on public footpaths

Has anyone seen this from MRMPW and what do you make of it? 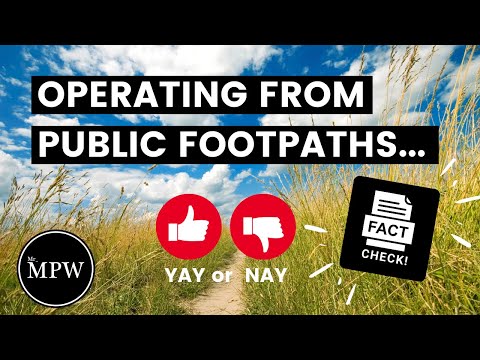 I don’t know about anyone else but I just want to be able to go out, on a whim, with my Mavic Pro, take off, scoot around and come home without having to even think about having to organise anything else

Just a little pleasure without any mither.
Is he just nit picking, please someone tell me he isn’t right?

3 Likes
UK law on flying in your local park & over private land
Councils and their rule(s)
Frustrated with rules & regulations
kvetner May 30, 2020, 7:33pm #2

Eesh. It may need a lengthy reply but I’m on my way out so will respond properly when I get back!

If you look into ‘can I do this’ or ‘can I do that’, someone, somewhere will say “no”.
If your safe, following the quite well known and fairly relaxed drone code, and not bothering anyone, send it!

If your safe, following the quite well known and fairly relaxed drone code, and not bothering anyone, send it!

I strongly agree and will continue to do so

Exactly my thoughts. As long as your not in a FRZ, NFZ or built up area, don’t over think it and just get out and fly.

We’re all grown ups and don’t need a youtube video to tell us where we can and can’t fly.

I think Matt Williams is coming at this from a commercial operator mindset. I would find it difficult and time consuming to get an octocopter or even an Inspire launched from a footpath. Even carrying something that size to a launch site will draw interest.

But opening up a folding drone taken from a jacket pocket or daysack - Mini, Air or Pro for instance = and hand launching isn’t going to be that noticeable. Once it’s fifty metres in the air - who cares?

Is hand launching taking off from the land owner’s property even? Surely the hand is in the airspace, CAA rules apply?

Is hand launching taking off from the land owner’s property even? Surely the hand is in the airspace, CAA rules apply?

Interesting argument. I’d like to see that tested in court

National Trust would be on meltdown

As Van Halen would say, Jump

I watched that video and got so wound up I posted a major rant in the comments. All he worries about is commercial operations and courses. He never in my opinion cares about hobbyists and fair enough that’s his business I guess. Right wound me up that did as you might gather.

Is this the guy that runs a commercial training company?

(I’ve not watched the video in the first post either)

Ignore that, I just googled him.

He makes money off regulations.

Few more cant hurt, can they?

I’ve come to my own opinion that… he does my fuckin head in!. After posting previously about his similar videos confusing me and after being inspired by certain other members…(won’t name Chris) oops bollocks!

. I’m just gonna fly the arse off my Mavic 2 pro.
After spending nearly 2 Grand on the bird, accessories, insurance, license etc and flown once outside my garden (yep, I know that’s not allowed either) since about July last year!, I’ll be fucked if I’m going to continue to be imprisoned buy the drone police or people that don’t/won’t understand this hobby.
Sorry chaps…rant over.

Yes exactly this guy epitomises the drone police and saps the life out of anything remotely enjoyable. He is entitled to his opinion and business I get that and more fool me for watching his content. He won’t even give a nod to those of us who prop up the costs of drone production in the wider sense, in fact I would suggest he would not bat an eyelid if we are legislated out of existence. It’s all money and qualifications to these people, must be a bundle of fun…not. And I do follow the drone code and will not fly outside the rules… well apart from footpaths he can do one on that score.

Airspace.
Lexico says “Space available in the atmosphere immediately above the earth”.
Cambridge - “the air or sky above a country that is considered to belong to that country”.
Merriam-Webster - “the space lying above the earth or above a certain area of land or water”.
Common across all the dictionairies I checked, appears this “the air available to aircraft to fly in, especially the part subject to the jurisdiction of a particular country.”.
A drone can fly a few inches above the earth so if it’s not touching the earth, it is in the airspace.
I never really thought of airspace being immediately above the earth but that appears to be the definition so hand take-offs it is from now onwards (following the rest of the drone code!)

So he runs his own drone business, but 50 sec in admits he doesn’t now the legal framework of aviation really?.

your a so called pilot, where’s the wanker emoji when you need one
@Simon2 read your reply

admits he doesn’t now the legal framework of aviation really?.

So, why sit there and try a preach to the masses and waffle on about it for over 12 mins !.
I will just put it down to a waste of 5 mins, that’s all it took to piss me off !.
As others have said, numerous times.
Just get out and feckin’ fly !.

I think some are being a bit unfair here. Matt runs a CAA approved NQE training school for flyers wanting training. It’s his job to interprate the frankly insanely confusing and often contradictaory rules and regs that the fucktarderinos at the CAA dream up behind their desks playing with their little pencil dicks.

My only criticism of Matt would be he can often take 10 minutes to give a 3 minute story, but he does know his stuff, he does query the CAA for clarification where he can, and ultimately he is indeed trying to give you the hard facts so you can make your mind up whether to follow them. And he’s a genuinely nice bloke who helps a lot of people. In saying this, I don’t agree with his stance on paths I should add…

Hand launching etc? Well, it’s not just the launching but the ongoing control on their land that’s the issue. So the old rule applies; take off and control from adjacent and fly over their land without issue.
I find quiet foot paths and lanes perfect for taking off. And the CAA have confirmed directly to Alan Proto of Phantom Flight School (NQE) who confirmed to one of my subscribers the following on footpaths:

“We have just had this reconfirmed by the CAA. Only exception is where the owner of the land has the power to pass their own bye-laws. Eg the National Trust. If they have the power to pass, and do pass, a bye-law to say “no taking off or landing on our property” then this trumps the general right to take off and land on the footpath.”