I picked up some cheap 7" arms in the quadcopters.co.uk closing down sale, which gave me the kickstart I needed to get the rest of the bits to build this, which I’ve been thinking and talking about for months.

TBS Source One V4 frame. I printed out a few TPU bits too - there are loads available for the Source One 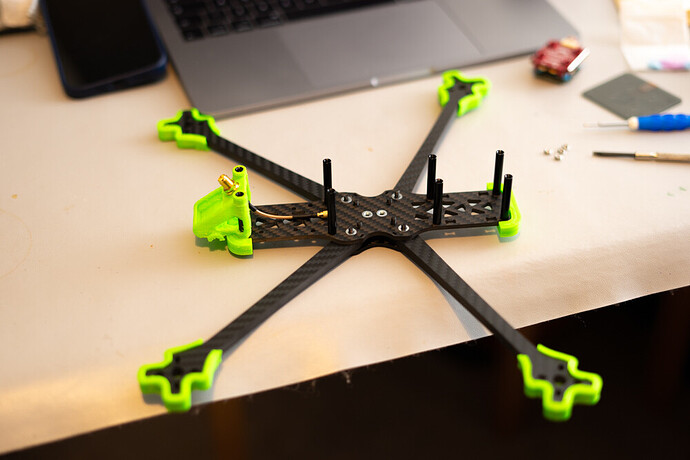 This little flight stack from Diatone is absolutely beautiful. Aside from the impeccable packaging and the way that the little box opens up, it seems to be built so well. No need for long gangly stack screws through the whole lot - it has 4 mounting holes on the bottom, with screw-in inserts for use with M2 or M3 screws, so it mounts easily with 4 regular short frame screws. The ESC is encased in an aluminium heatsink, then the (F722) FC comes ready bolted to the top of it. Lovely 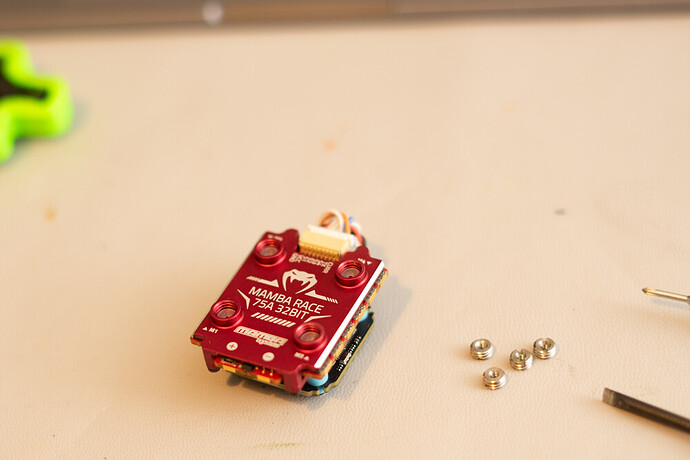 It’s a small 20x20 stack, which is fine. A bit annoying that they don’t label the pads, so you need to carefully check the docs whenever doing any soldering. 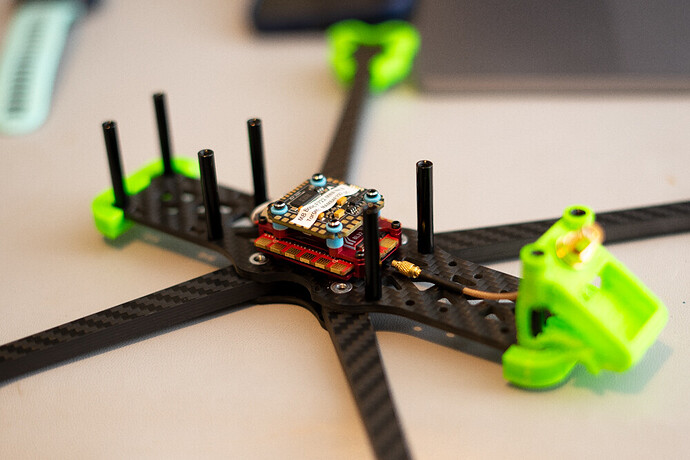 Yeah loving that stack. So neat.

The FC looks like the ones I’ve used before. Nice big pads. I do like diatone stuff.

The ESC looks very clever. Solves so many issues. Go on save me a task and link to the product page… 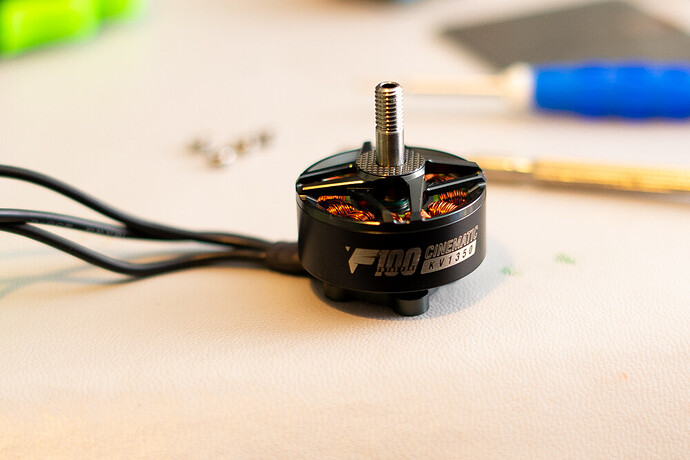 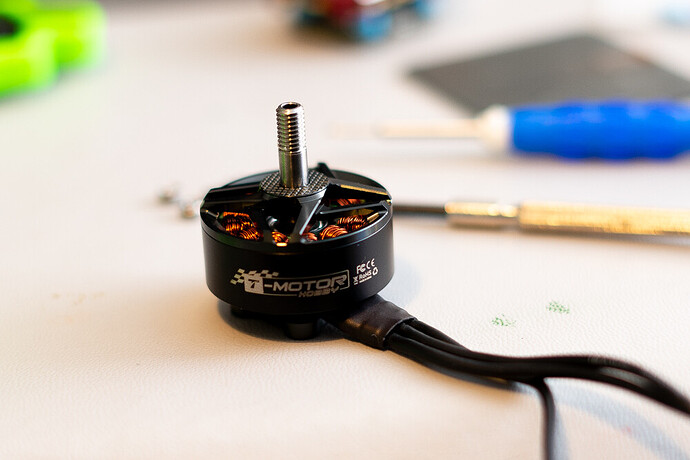 They seem HUGE compared to the 2207s on my 5"!
They do an F90 which is 2806 and listed as suitable for 6-7" long range, but these were a few grams heavier and a lot more powerful, intended for 7-8" and also suitable for X8 cinelifter configuration. I figured the extra power would easily compensate for the slight weight increase and perhaps make for a smoother flight experience. Everything I see related to 7" cinematic quads in terms of tuning and smooth flight starts by saying bigger is better and that a lot of the tuning problems come from motors that are struggling to move a heavy frame around. I’m more interested in smoothness than acrobatic performance, so these seemed a good choice.

Only received it yesterday but it’s now out of stock. Maybe I got the last one 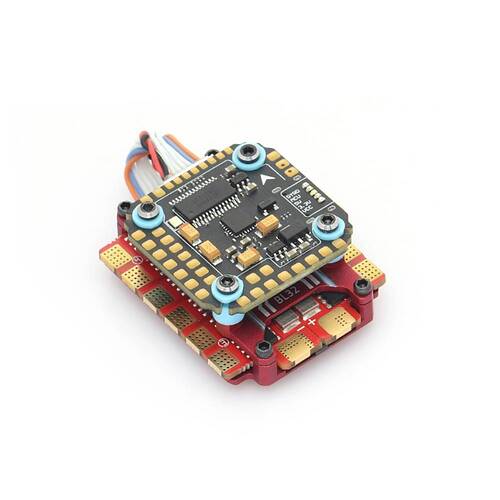 The ESC alone is available for £20 less 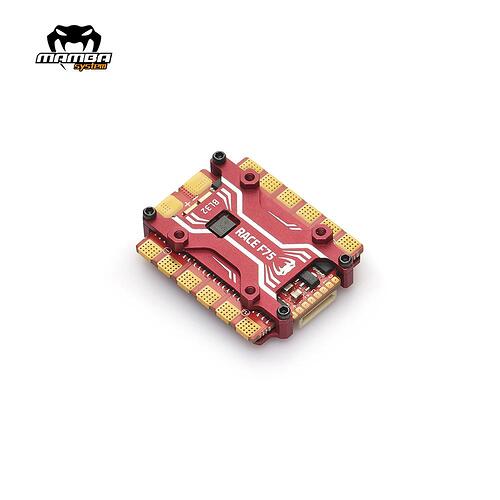 The ESC alone is available for £20 less

Possibly unneccesary, but a 50A version was available for about £2 less and these motors with 7040 props can pull around 45A apparently. It didn’t seem to do any harm to have the extra headroom, plus I liked all the alu casing that came on this model. And it looks cool and I’m a tart!

No for that build I’d do the same thing. If you’re spending that much money on an ESC then you really should over spec it.

To be honest - pickings are slim at the moment, even if you did want to do things on a budget. £80 for a FC + ESC stack is pretty averagely priced in terms of things that are currently in stock. There are a few cheaper options for about £65 with 40A ESCs and there are lots of more expensive things too. Even an iFlight AIO board is >£100. Finding stuff in stock is hard.

I’ve had to order some more motor screws. The 6mm arms only allow a couple of mm into the motor thread, even less if you stick some TPU bumpers/skids on.

I’m new to 6S too, so have ordered a single 1500mah Lipo for now. Once I’ve got things set up and working I’ll decide whether that sort of size is ok or whether I need a couple of, say, 1800s or 2200s. Damn, they’re expensive though.

Finding stuff in stock is hard.

Yes, I have reigned in my natural tendency to look to buy new shiny things… well in electronics anyway. I’m concentrating on cheap stuff because stuff like ESCs and FCs has gone crazy,

Looks more like a quad with the top plate and motors on. 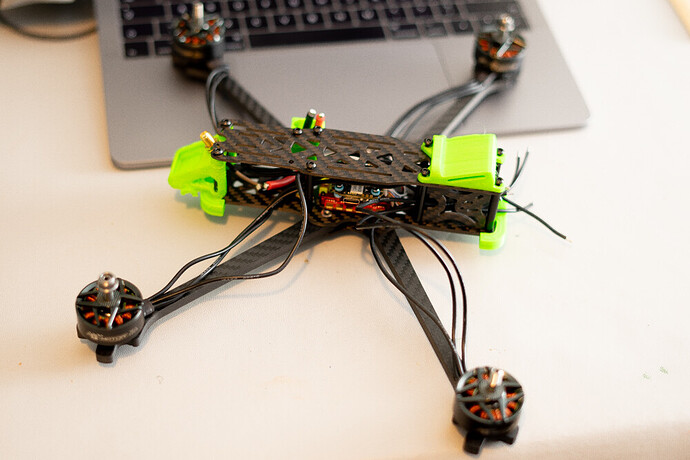 I don’t like the design of the arm bumpers I printed, so need to try something else. Also my little Runcam Phoenix is too narrow, so I need to dig out some spacers/washers or something. I’d like to stick HDZero in this when stock levels get sensible again, so the FPV setup in here will be a temporary analogue one for a couple of months just to get going.

Heh… when anything is in stock… I have no VRX, so need to wait for that before even considering HDZero!

I went for full-on motor protection with the arm bumpers on a couple of my quads after ended up with bent motor shafts. They protect almost all of the motor bell.

Finished the build off last night - more or less 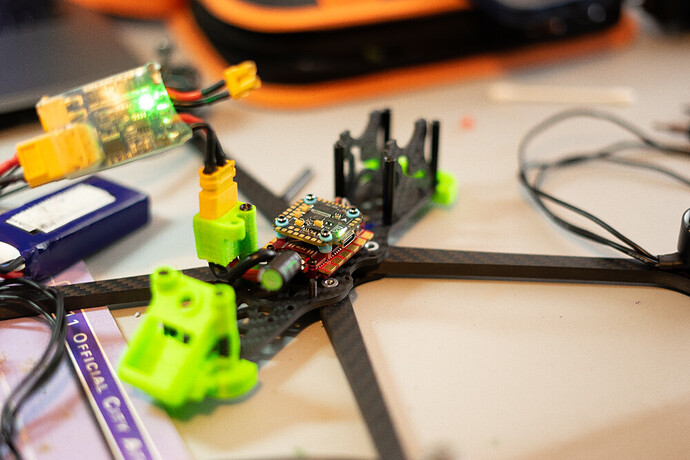 Camera, VTX and Tracer in 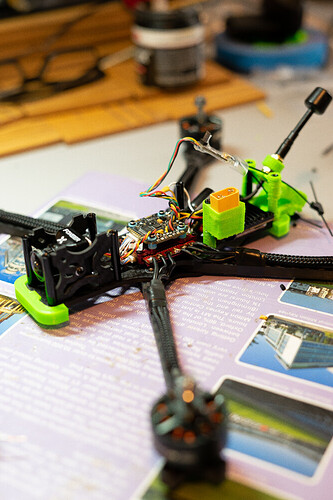 Plenty of space inside 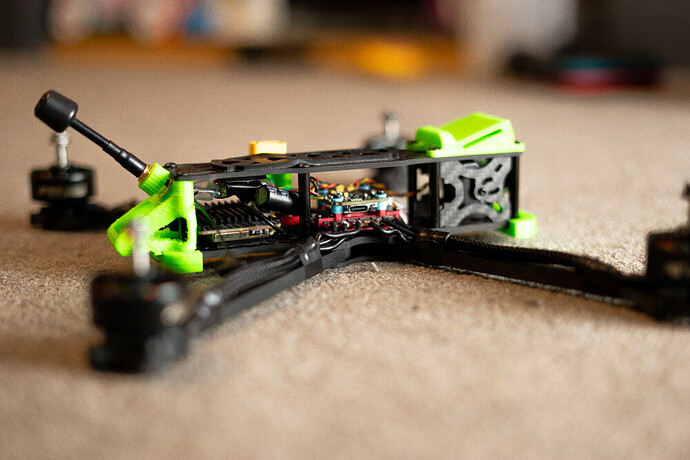 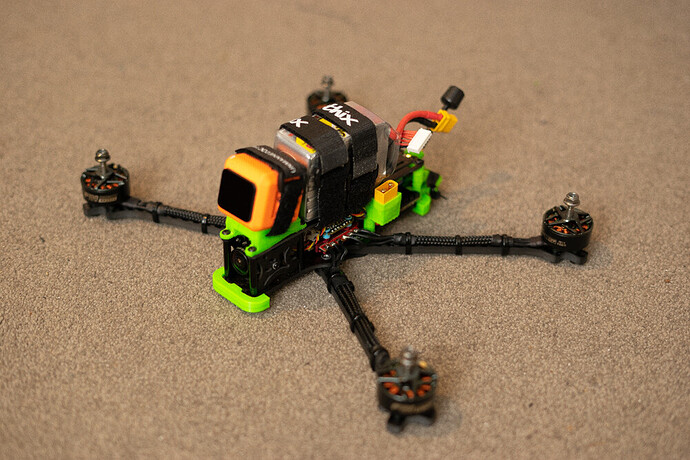 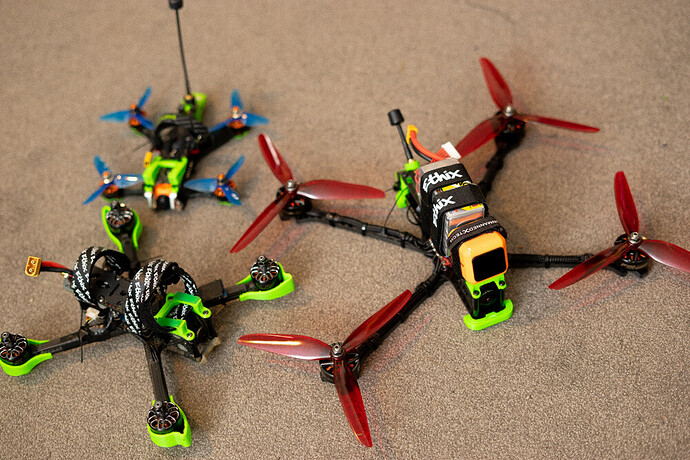 Still a few bits to tidy up, like where to fix the second Tracer antenna and some other small bits.

It’s a big beast sat next to your other quads

Just did a hover test in the garden, did not go well

First of all I used the new BF4.3 presets to download and apply one of the official PID/filter tunes for a 7".

As soon as you arm, it heads for the sky. Angle and Horizon mode are worse, Acro is a bit more tame but still does it. Cue lots of disarming very quickly from about 5 feet in the air back onto my big bouncy cardboard box.

Came in, loaded the default tune again from the presets menu. Also changed down from a 6S to 4S battery. This time, I can arm and it sits there spinning gently in all modes. In Acro, as soon as I raise the throttle enough to get off the ground (35%) it starts to climb and bringing the throttle back down to 0% doesn’t make it drop, it keeps climbing - so quick disarm again. I was a bit more ready for it this time, so mainly dropping from a foot off the ground. I think the stick response is ok - I can raise the throttle to, say, 10% and hear the motors speed up, then drop it back to 0% and they slow down again. It’s just when it starts to take off that it gets out of control.

Any ideas? Lots of the tuning options have warnings about flyaways and whatnot, I wonder if it’s some sort of PID/filter loop that’s running away with itself. Pretty worrying. The default tune should be sensible though?

Not as bad as this I hope. This was dodgy receiver wiring. 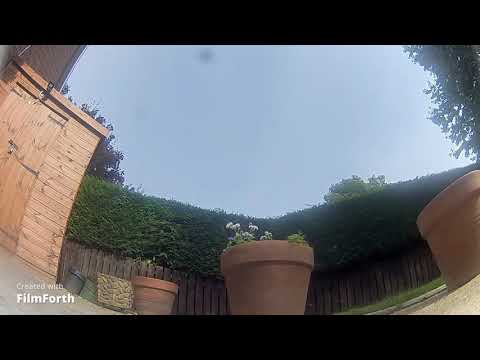 Wow! No, the worst was about 5 ft up, then dropped down onto a big soft cardboard box (that a bike came in), then bounced onto the grass and broke a prop

I then moved the box into the middle of the garden and made sure I was launching from the centre of it. I think my receiver is ok - everything looks fine in the receiver tab in BF.

The fact I went from the 7" preset tune back to the 4.3 default and the problem wasn’t so bad leads me to believe it’s something to do with the tune, filters, ESC protocol or something along those lines. I might do a complete reflash of BF4.3 - only takes 10 mins to setup my ports and modes again and take it from there. Maybe with 5" props on too!

Not going to have much time today now though, or this weekend. So, experts out there, hit me with your ideas over the next couple of days and I’ll do some Googling in the meantime too

everything looks fine in the receiver tab in BF

Everything looked fine in the RX tab for mine as well. It just went all up shit creek once you put throttle on. I think the issue was softserial and the PID loop… I had not meant to put the RX anywhere near softserial! Oh and the antenna was knackered.

After the first attempt where it kept launching on arm, the motors were quite warm when I came in and removed the props, despite it only having been armed a handful of times for 1-2 seconds at a time.

Have you tried flashing bf and just using default settings without any custom tunes applied?