UK Pilot threatened with a gun

Believe was a BB gun, but FFS… Madness 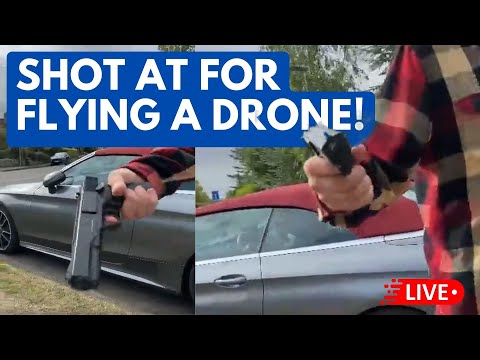 Found a link to an article now That’s the time to call police instead of confronting the guy.

Don’t think he confronted him, was the gun owner coming at him. He had been packed up and apparently knocked the gun out of his hand drove off and called the police.

Well, on the video he walks to the guy and starts talking to him. A 999 call about a man with a gun on the street would have been smarter response.

Sorry but if anyone walks towards me with purpose like that? I aint phoning the police, I’m not big and I’m certainly not hard, but a right elbow to the cheek or jaw would ensue, followed by a few kicks or punches to the head. Sorry, not sorry.

Watch the video, the drone operator walks towards the guy with a gun. That’s not smart no matter how big or tough you think you are.

Of course, he probably thought he could reason with the man, but if I see someone walking on the streets brandishing a gun (imitation, BB, real or what ever), I know he must be off his kilter so why start agonising him any more. Just call cops and let them deal with him.

Well, I’m off my kilter a little too. If the “gunman” was serious he wouldnt have opened his mouth, like most bullies he tried to rely on his mouth to intimidate. Serious people don’t speak, they “do”. And yes I have been in a similar situation. The outcome was a broken jaw and nose, not mine.

I’d have safely put it back in his storage area

even if it’s not a real gun the drone guy is not to know , that can still carry a heavy sentence any thing that replicates a gun ( in public ) used to be the law as I knew it , that said you need a decent judge who’s not corrupt or bench ! Rather than the ones that say ( oooo he was sorry , he’s got problems ) & blah blah blah , yea we all have problems but we don’t go waving guns around , he’d be sorry if he had of done something terrible , you get banged up for breathing these days , the worse ones get off light !
I’d of gone into kill or be killed mode if he held a gun at me if I thought I could challenge him ( on a self defence basis ) that simple , the idiot .
Edit I’ve probally said the wrong thing here but we’re all different so no offence , I was brought up to protect myself , my family & my home & depending on the situation that’s what I believe in.

I’d have safely put it back in his storage area

And we would have still be scraping bits of a 71-year-old man from Cirencester off the pavement.

I like how the video title ends with “this has to stop”. As if drone pilots are routinely being threatened by people bearing imitation firearms…

Doesnt matter if its a fake, its still classed as a firearm with the intent it was being used for. If armed police turned up they would have to suspect its real, one false move and…

one false move and

They get very shouty

Could not listen to the video for long because of all the feckin bleeping ! worse then hearing the actual words…Why the fuck do they insist on doing that crap…

Why the fuck do they insist on doing that crap

Keeps Karen and Ken happy, fuck them too

Yes I no , hence why

Got to admit I’ve had a different experience of them up here. Been approached twice by arms officers, both times there was no shoutyness, just very clear and concise instructions, I did what I was told on both occasions. One was as Faslane, one was at Dunblane and yes I almost soiled myself

Been approached twice by armed officers

We’ve had them a work a few times (999 callers being a little vague and economical with the facts), in a crowd they very loud and very intimidating, even to bystanders (I know they have to be sure)

used to be the law as I knew it

I was merely pointing out that it is still law, sorry if I upset you