So after an enquiry from @rib71 about stitching panos using the Mac we had an ‘online lesson’ and during this I tried a few new things myself (free) and also took the drone with me on my exercise today to do a little test.

Hangar 360 (my go to pano app for ages) seems to be dead once and for all, it will still to connect to the MP and fly, and indeed take the 23 images for a mission however it wont upload to their servers for processing despite many attempts, I’ve emailed the developers and got nothing back ;o(

So I thought I better start looking at options for the summer months after lockdown when I can get some proper flying in.

So the following is the same pano (altitude 90m) shot using 3 different apps all within 12 minutes of each other, all were stitched with DJI Media Maker (I didn’t know this existed until today) you just drop the files straight from the memory card onto the app (Mac and Windows versions available) and it spits out a stitched image ready to upload. Not sure how it will cope with tricky stitching, but thats for another day if anyone is interested, lots of stitching program options are available.

The files were then opened in Gimp (free image editor), and the canvas resized to 15000 x 7500 (optimum ratio of 2:1 for 360 images) I then filled the top of the canvas in black, although sky can be added if you’re feeling adventurous.

Uploaded to Kuula and the results as follows

1st I used DJI GO4 on the pano preset, it shot 34 images, exposure is well out but it stitched well, I could probably rescue this if I played with all the images individually (mainly levels adjustments)

Next is Hangar 360, as I said earlier I have been a massive fan of this since my Phantom 3 days, now unfortunately (so it would seem) the uploading of images is not working, however it will still connect to the MP and run a mission, so I did that the this is the result from the 23 shots it took.

Exposure is much better than GO4’s version and again it stitched really well.

Next up 2 from Litchi, I use the app for 99% of my flying, in this first one I just used the auto panorama preset, 23 images. Good exposure, although the sky could do with some work in photoshop to take out the bright areas.

Next is the 2nd from Litchi, this time manual 23 shot panorama I used manual exposure settings and AE Lock. Overexposed on the sky and the cooling towers, (think a cloud may have got in the way) but again stitched well

Verdict from me, I wont be using GO4 for Panoramas ;o)

I’m preferring the last one I think.

Am I allowed any more?? Just one, well maybe two. The scaling in gimp, I know it should be simple but no matter which way I try I’m still getting the warped horizon…!! What steps did you take to change canvas size? 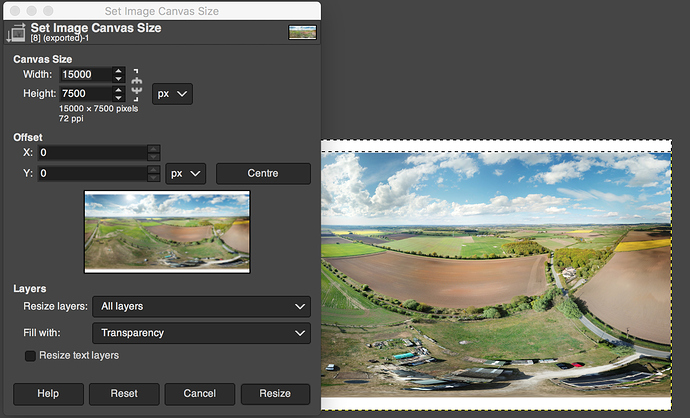 Maybe I’ll have another go tomorrow! Thanks again for all your assistance getting this far. 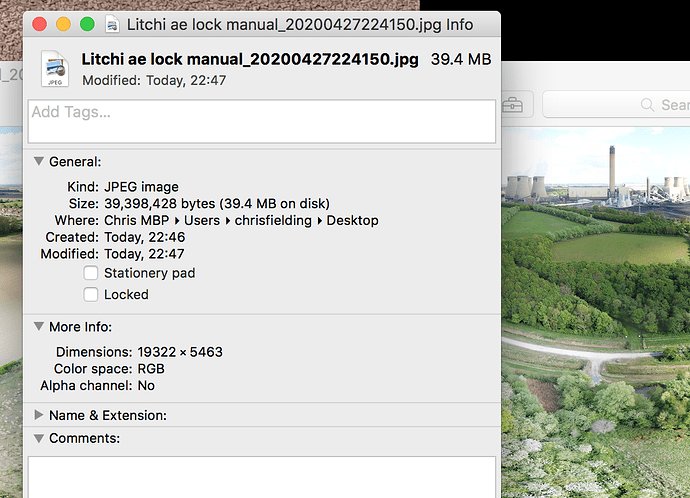 So I open that in Gimp (or Photoshop etc) 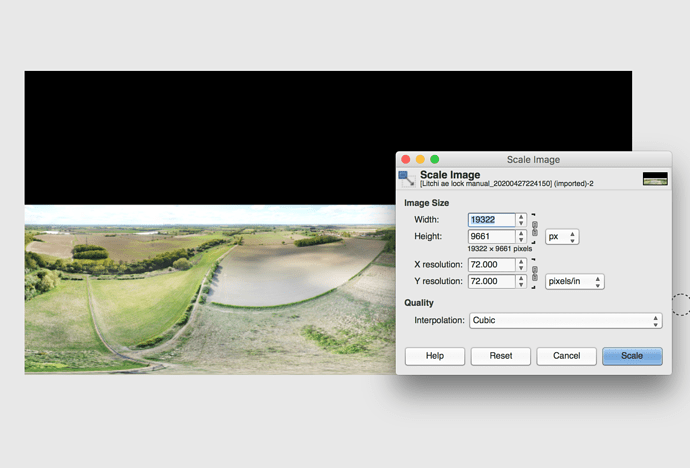 Once I have done that then I have the ratio I want of 2:1. I then fill the new bit of canvas with black to make the published panorama look prettier.

Now I can then go ahead and just resize the image (not the canvas this time) to anything I want, keeping the proportions of 2:1, depending on where I’m posting it (I think Kuula used to have a maximum file limit of 15000 x 7500 which is another reason that sizing) 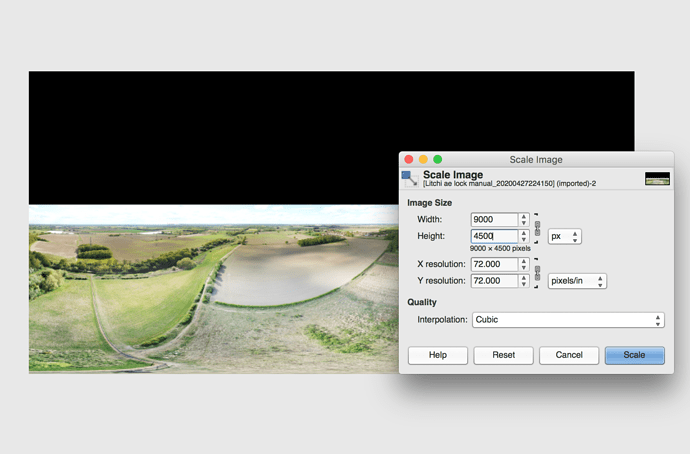 Kuula is the better place to share, gives you nice tiny planets too 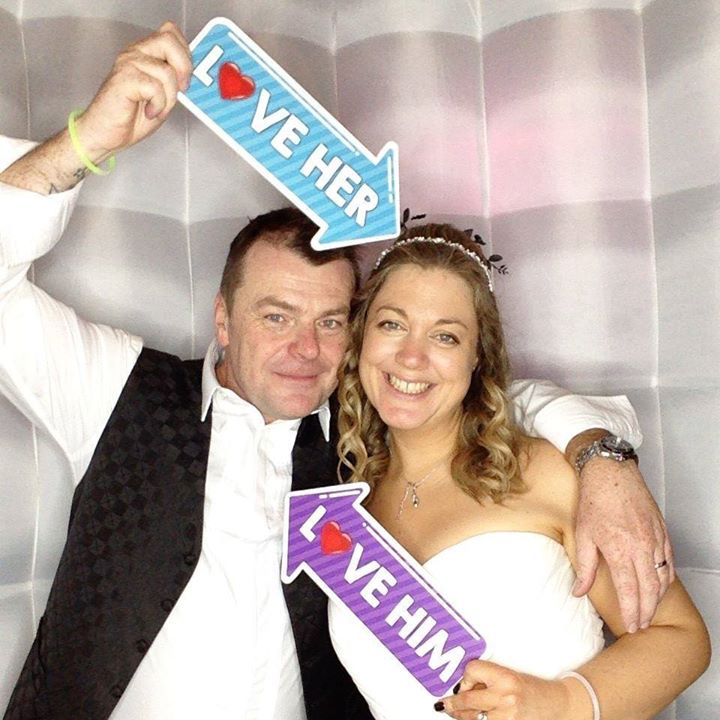 Family Man and Gadgeteer from the North, last of his name 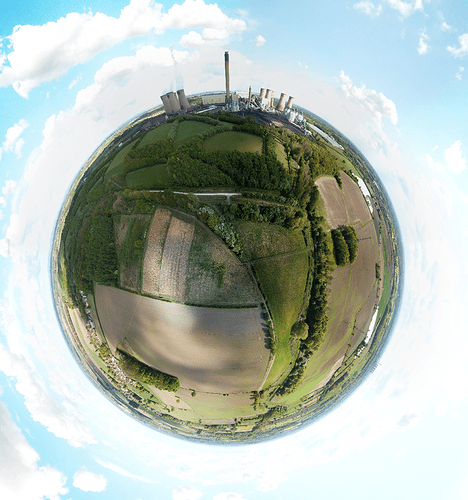 This is pretty easy to follow, just turn the sound off cos its shit

Thats an excellent investigation/comparison - well done mate on being so knowledgeable - talk about high concentration levels to adapt to so many options. BIG thumbs up.

I like Kuula as well, just have to remember to use it

Thanks for the comparisons - good to see and also the mention of DJI Media Maker. Like you, never heard of that so just off to install and h ave a play.

thanks again @milkmanchris, excellent tutorials! 1st one achieved…will get out and do some more now !!

Those of you that have M2P will get a stitched pano image straight from DJI GO4 of the right ratio and size all ready to upload to Kuula, this is the latest one I did just as it came off the sd card apart from overlaying my logo .png file taken at 47m altitude

Its good enough for me, if all you are doing is putting it up online, I can’t remember if it was on auto exposure or if I had set the exposure myself. You still get the 26 original images on the sd card as well if you want to put it together yourself, I tried the first time I did one with the M2P and on Kuula could not tell the difference, so why spend the time messing about?

The Mavic 2 panos are amazing, be interesting to compare how it does against litchi and other apps though.

I’ve not looked but surely if it’s from the GO4 app then any drone that uses that app should benefit from it? Or am I whistling out of my a$%^ again!

I’ve not looked but surely if it’s from the GO4 app then any drone that uses that app should benefit from it?

The original MP does indeed have the feature, but the quality is nothing to that of the M2P, check out the images it spat out in the example above.

The original MP does indeed have the feature, but the quality is nothing to that of the M2P, check out the images it spat out in the example above.

The MP uses the thumbnail images to put its pano together whereas I’m sure the M2P uses the original shots hence the big difference.

With the M2P or M2Z, the Go4 app does no more than instruct the drone’s on-board firmware to carry out the stitching of the full-res images into a hi-res panorama image that’s saved to the SD card.

Which look like this, not touched this, its straight off the image album on my iPhone, same images as the top example

Interesting… only having an Air and doing manual stitching outside of any DJI app I was and remain unaware. I bow to everyone elses intimate knowledge of MP’s and GO4.