I’m having issues when trying to take photos while the drones in the air, mostly noticeable on night shots on long exposures, I line the shot up, focus and take the picture, the screen holds on the image it’s taking and when returning back the image jumps slightly to left or right, this then makes the picture taken blurred.

Now it seems like it’s yawing slightly in the air and you can even see it wondering when hovering with no picture taken.

I’ve redone all the calibrations, inc the stick calibration on the RC.

I went out again this morning to do some testing and when hovering it does eventually stop yawing either way.

I’ve only noticed this since the last update really and wondered if anyone else was having this problem.

See pic below and you can see with the lights dragging slightly and this is on a 2 second shutter speed.

Any help would be appreciated. 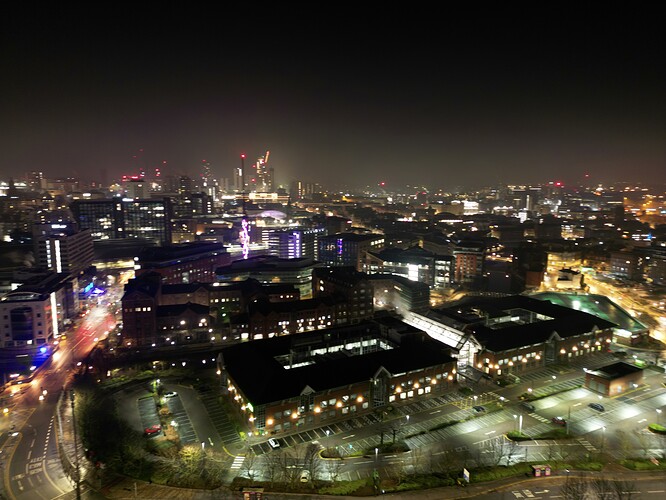 If there’s even the slightest wind, your drone will struggle to take a 2 second exposure without drifting slightly. All I can suggest is taking shorter exposures and editing back at home on your computer.

If there’s even the slightest wind, your drone will struggle to take a 2 second exposure

Agreed…I was taking some 360’s with my Mini 2 last week and part of the image didn’t stitch and the wind was only 3mph at the time!

Thank you for the replies, I took a low level pick yesterday morning below the street cables that I posted in drone pics, there was no noticeable breeze, I could even see the frozen fog falling in the car headlights, it did it then as well, I ended up holding the left stick to the left slightly to counteract it.
I do a lot of night shots and never noticed it before until just over a week ago when the last update was.

Agreed…I was taking some 360’s with my Mini 2 last week and part of the image didn’t stitch and the wind was only 3mph at the time!

Very much doubt that wouldn’t be anything to do with the wind. That will be due to the stitching software.

I guess you refer to the image stitched by the drone? If so - have you tried stitching the images in other software? Following this is a good guide. How to create high resolution 360 Panoramics

Cheers for the link, that seems a lot of phaffing around. I only do the odd 360 so not a major issue.

Nor is it a wind issue.

MS ICE works well on Windows (it’s no longer supported or downloadable from MS - but installers can be found). Has served me well for 95% of the ones I’ve taken.

I’ve only noticed this since the last update really and wondered if anyone else was having this problem.

I also noticed a slight drift of my mini 3 Pro with much less wind than previously used with no drift. Thought it was me! I’ll keep my eye on it.

I wouldn’t be at all surprised if the cold temperatures we’ve been experiencing lately are having an effect on the electronics.

Even though the gyros and accelerometers in our drones look like little chips they are mechanical in construction and operation. I don’t know about the M3P but DJI claim my Mini2 has a minimum operating temperature of 0 Celsius, and we’ve had temperature below that recently.

Cheers for the reply @Nidge , I did actually look into this as yesterday’s temp was -7 deg but the DJI manual for the M3P says "The operating temperature of this product is -10° to 40° C”
I’m going to try putting the drone into position for the pic and let it settle down for a while to see if it stops moving, the grid lines on the display is the thing to watch on a set position in the picture.
More testing in the morning…………