but I guess I cannot stop you so long as you fly with in the CAA regulations there’s not much we can do.

Only problem is VLOS. From the town where I’d be well in sight of the Mini 2 I’d have to fly over Carnforth station, the west coast mainline and branch lines to Leeds and Barrow. It’s a busy station with Avanti going through at full speed so I’d rather not.

Anywhere else, it’s either too far away for VLOS or there’s trees blocking any view.

so their 50 metre rule doesn’t apply

I did say their 50 metre rule, based.on this 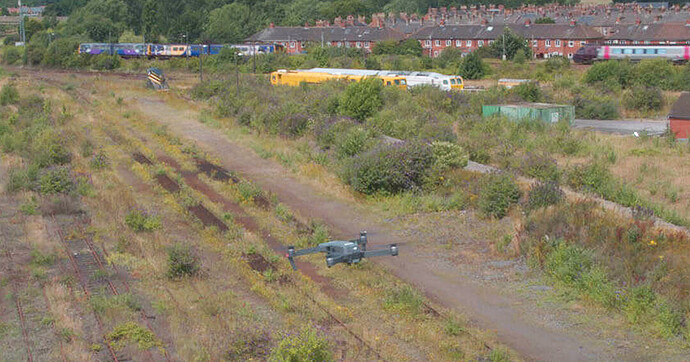 It is illegal to fly a drone on or near the railway. Even the cheapest, smallest model poses a risk to the railway, our passengers and staff.

Ah, ok, I thought there was an actual rule or something that I’d missed, not just their wishlist of “rules”

@Doodler Andy fly from here, the club is disused so the car park isn’t used much.

Slight digression but after a bit of digging, the man was charged with selling photos of Tornado having taken without a commercial licence. Sweet FA to do with being close to a railway.

Well done to NR for an excellent spin on the arrest.

No idea how a Mini 2 will deal with a steam train at speed in the dark on a dank day like today but I’m about to find out. Not flying over Steamtown but Scots Guardsman is heading back to the depot in an hour and I’ll be at the start of a 3 mile straight.

Update, the rain they haven’t been forecasting all day has decended so no steam train in the dark photo for my 5.

Picking up the repeat 5-in-5 comment elsewhere. Yes, would love to do a version of it again. Not sure about the distance restriction, maybe a wider radius and the subject of each photo specified.

For example 3 subjects, water, wall & window within a 10 mile radius. Allow a topic to be interpreted, like a view through a bridge being a window on a river. Or a church window, etc.

There were two main reasons for this challenge. Keeping the distance smaller meant that people who found it more difficult to get out and about weren’t at a disadvantage. I’m lucky, I travel all over the UK for work and my employers pay my fuel. Distance for me is not a problem, but for some it is, so I wanted to level things out a little. During the Birthday Challenge I probably travelled 2 or 3 thousand miles for work. Only around 200 of those miles were on private mileage for which I had to pay a measly 16 pence a mile, not everyone is so lucky or mobile. The other point was to get people to think about and look at their area in a different way, highlight what makes your local area special, what makes it stand out, why you love it. That was the reason for allowing all photography mediums, to let people get creative and expressive without having to worry that you can’t get out to fly. But as this is a drone forum, at least one of the pics had to be from a drone, otherwise what is the point?
Plenty of time for chat and discussion so keep the ideas coming, but I will say that if we do it again, the rules will be kept simple, I can’t please all the people all the time

I’ve posted elsewhere about my personal reasons for particularly enjoying this challenge, but for what it’s worth I think it’s a great concept.

The 5 mile radius made me really think about what to include, but it was still very much an achievable goal. And that’s with approximately half of my 5 mile circle falling within the Norwich Airport FRZ.

A repeat challenge would get my vote, and hopefully might generate a few more entries (though 8 isn’t a bad haul so far to be fair).

The only thing I might suggest is having the discussion and entries thread combined. I know there were reasons for separating them out, but if everyone is discussing and submitting entries in a single thread then it keeps said thread near the top of the Challenges category with a higher turnover of new posts.

A repeat challenge would get my vote

Same here, just things on the home front prevented me even trying this, which was also one I really wanted to take part in

hopefully next time, you also get my appreciation & thank you for putting this together in the first place …

One thread for each, the discussion thread would easily lose the entries and I’d expect a separate entry thread makes it easier for the committee to turn into a voting poll.