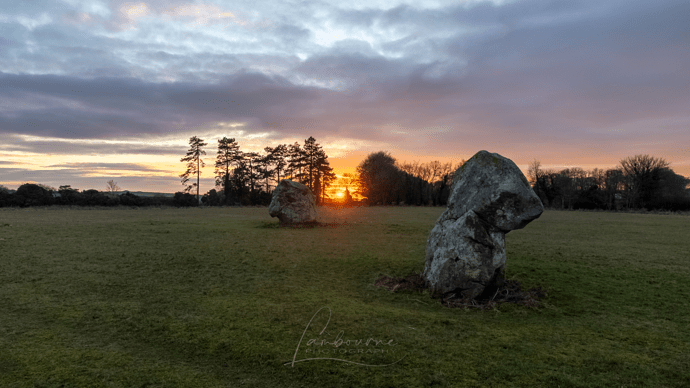 Adam and Eve Stones also known as Beckhampton Longstones are two large standing stones which are the only visible remains of Longstones Cove and Beckhampton Avenue.

Adam is the larger of the two stones and along with three others formed a four-sided cove known as Longstones Cove which was also part of the Beckhampton Avenue. Unfortunately, the other stones were destroyed in the post-medieval period by a landowner. Adam stone fell over in 1911 and was re-erected in 1912.

Adam and Eve Stones are all that is known to survive of the Beckhampton Avenue which was a major ceremonial avenue of standing stones. It's believed that this avenue was connected to Avebury Henge, but there is no evidence to support this theory. The Longstones are two standing stones, one of which is the remains of a prehistoric 'cove' of standing stones, at grid reference SU089693, close to Beckhampton in Avebury parish, in the English county of Wiltshire. Two stones are visible, known as 'Adam' and 'Eve' although the latter is more likely to have been a stone that formed part of the Beckhampton Avenue that connected with Avebury. The avenue probably terminated here although it may have extended further to the south west beyond the sto...