Cinewoop as my first drone?

Hi everyone, thanks for welcoming me on my introduction post.
I have decided to buy a cinewhoop fpv drone as my entry drone into the hobby, only trouble is I am struggling to find ones that aren’t too expensive but also aren’t crappy.

Can anyone point me in the direction of the cheapest cinewhoop drone I can get that is worth getting?
Thanks

Never really been into cinewhoops. What kit do you have presently. Goggles, transmitter etc? 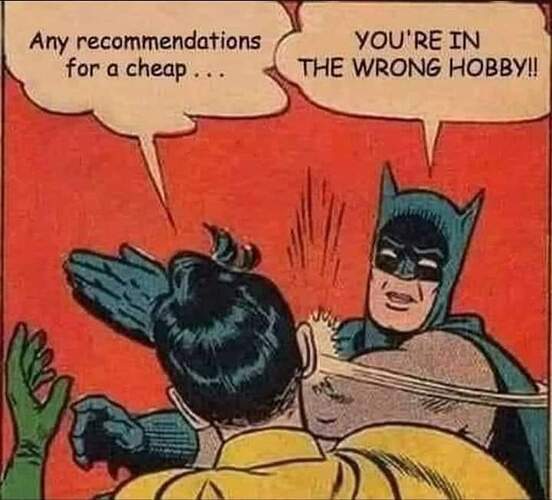 . I have a transmitter from a previous drone but it’s pretty toy like with bubble gimbals. I don’t have any goggles or drone yet as I’ve only just decided to pursue my interest in drones; and I didn’t previously have the money to spend on this hobby

I’m sure the selection for goggles and controllers will be easier than drones because there is less of a selection, but finding a good drone with 0 experience is a bit challenging, hence why I asked you knowledgeable folks.

Ah I see, well in that case I will have to save for a bit longer, but that’s fine by me! as long as I find the right drone for me at some point

Maybe I should get something other than a cinewhoop? have you any suggestions for the type of drone I should get? don’t worry I don’t expect you to pick me one out I just need a little bit of guidance

If it’s a cinewhoop then I guess you want to be getting some good video from it. I don’t think “cheap” cinewhoops exist if you want quality video (go pro, etc on top). My only cinewhoop is the cine8/cineflea, which I put a runcam thumb on (there is a thumb pro now which does look might be worth it). It’s cheap simple and you build it yourself with no soldering. But you won’t be lifting go pros, etc with it!

If you want quality video in cinematic style a mini 2 second hand might be worth looking at. Though you can’t fly acro, and boy FPV is a lot more fun! What’s your use case for the quad?

Oh and it’ll be the controller, the goggles, etc that cost a lot… Decent analogue setup, minimum £200 and them the radio at least £100! If you want digital… Well that’s a whole different story, and probably not the best time to invest in digital with what’s going on there at the moment!

Ah ok thanks. I’m just looking for something fun to practice and get used to the feel of FPV before I invest a lot of money in (since I don’t earn to much

)
A GoPro would be nice on my drone, however If it would make it more expensive, I will happily fly without one

Yea, digital is pretty new I heard. And yes I’m willing to spend that on goggles and transmitter as I can reuse them if I want to upgrade drones ( I think). Analog will work just fine

Well tiny/babys hawks and whoops are good for flying and learning FPV. I don’t think many/any here fly cinewhoops, and the guys I know @ drone circle who do, they’re not cheap quads. They’re camera platforms.

I’ve even gotten to the point of saying you need to learn FPV outside even with a tinywhoop, throttle is a weird thing to get right. Maybe get a radio (radiomaster Zorro I believe is very good these days), and play on a sim for a while. Highly recommended, actually more or less insisted on to practise on a sim first! But boy is it a fun hobby!

Nothing wrong with analogue. I have recently jumped on the DJI ship, but with walksnail just released, HDZero coming on nicely, and DJI threatening to release a V3 of their system… You’ll probably end up with whoops that are analogue anyway, so…

Ah ok this helps a lot, I appreciate it. This is a bit embarrassing to admit but I didn’t realize cinewhoops were a type of general ‘whoops’ (bit stupid on my part, should have known from the name haha).

I’ve heard about the Sims and I’m definitely open to it!

Definitely get an idea of what you want before you start buying as youll end up buying stuff twice which will cost you alot more in the long run. As @gunja99 said its worth getting a radio (controller) first and learning in a sim. Also would be worth trying to meet up with a few pilots on a local meet if possible as you can chat with them and check out all their gear and get a feel for what you would like to get into and roughly how much it will cost

Where abouts are you located Louis?

Tinywhoops are just small agile quads, nearly everyone I’ve met has a tinyhawk (was my first FPV quad). They’re great and survive crashes and can fly inside (actually meant to fly inside!) But they OK outside if NO WIND. Only issue with outside tinywhoops are… easy to lose, lol, hard to spot on the ground, but they sub 250g so can fly anywhere really (with a spotter)! Mobula6, tinyhawks, they good tinywhoops.

Yeah whoop is a quad with ducts (not open prop), so thiny whoops, and then cinewhoops are the two you tend to see! Open props perform better (and 5inch is more or less king), but you can have fun and learn a lot (and break less) with a tinywhoop!

Sims are a must (lift off, and velocidrone worth looking at), if you’re PC up to it!

Yea I agree, I don’t want to rush my purchase and regret it later! I’ll probably get the radio first tuen, seems like a great idea.
I’m located in South London by the way

Thank you so much this is very helpful of you. Anyone else reading this too I appreciate you taking time to help me out!
I’ll probably get a controller first then and learn the SIM and controls (yes my pc is up to it) then have a look at tinyhawks.