The reason for the question is that some of the latest youtube videos say it hasn’t but after asking DJI they seem to be saying it has the feature?

I look forward to you comments on this

I always fly all my drones back manually and mostly hand catch, 100% precision

I always fly all my drones back manually and mostly hand catch, 100% precision

Does that mean you only have 1 finger and 1 thumb remaining?

Does that mean you only have 1 finger and 1 thumb remaining?

Bitten once, P3A on my arm, complacency with big bird ;o)

and yes it was sore!

Thanks for the response

Mines quite good, landing on average 3ft away but the precision landing will be very useful

Lets hope the next update of Firmware will include this

It does not have precision landing. This is the main thing I miss in coming from a DJI Mavic 2 Pro. The Mavic 2 would land within a couple of inches of the target; the Mini 3 can be 0.5-2 metres off course it seems.

It isn’t a major problem … except … if your drone gets into trouble or your controller crashes, the aircraft will auto-return to home; and if it misses you by a few meters that can be a significant risk in certain circumstances. If I’m in the middle of a field, no problem; if I’m launching near a fence it might come down on the other side of the fence. Or on a road.

I do know know whether there is the right hardware onboard for DJI to add precision landing at a later stage. Most likely they have held it back as a value-added feature for other/future models.

or your controller crashes

It’s not happened to me either. But there is a risk that the controller may lose touch with the drone (including for example a flat battery in the controller). In doing a flight plan I consider a range of failure scenarios of which this is one.

Been quite a few reports of the new RC controller (with screen for Mini 3) crashing with the only way of recovering being a total shut down and re-start of the RC.

Latest firmware revision seems to have fixed it though.

including for example a flat battery in the controller

I would check the battery in your controller is charged before you take off. I have never had a controller go flat on me.

Had a failure twice on the M2 where the controller stopped responding and the drone itself stopped responding to inputs (not just the app, the sticks and buttons) and it auto RTH and landed.
Precision landing meant it was fine. Without that it could have been in the water or on a road.

FWIW the Mavic 2 Pro didnt have it on launch but DJI brought it back due to demand.

Im not sure the Mini 3 has the optical downward sensors for it though.

I spent ages this afternoon trying to get the Mini 3 Pro to land more accurately. I tried pointing the camera down and updating the Home point… didn’t work. It isn’t awful but I have a pad which I put on grass but it never lands on the pad and that means the blades hits the grass sometimes. Getting used to landing the final 3ft myself but it might not be so good if the controller crashes.

Getting used to landing the final 3ft myself but it might not be so good if the controller crashes.

Our friend @ianinlondon shows you how 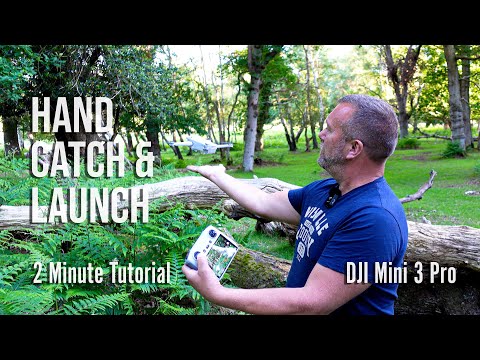 I never attempted a hand catch with my mini 2, it always reminded me of an angry wasp. With the 3 I have no problems with TOAL from hand so if the terrain isn’t suitable that’s the way to go.

Yes, that really is easy isn’t it.

if the controller crashes

Never known that happen, and if it did and the drone returned to home and landed a meter or so away from the toal point I would be well happy