Emax complete kit or my mix?

Ok I would say I’m pulling my hair but

I seen a post I think it was you @Nidge said you had in your collection a emax tinyhawk apologies if not, anyway did alot of YouTube on it and loved it.

Being a novice and meaning the word as I’ve never ever touched or seen one up close, and when ever I read or look in the fpv section it scares me as I’ve seen soldering irons and chips and more, I’ve attempted and bought many soldering irons and never ever fixed anything as I have hands like shovels and eyessight cr@p

I seen on banggood emaz tinyhawk with a starter kit goggles and controller.
Starter kitIt probably would suit me as I have DJI goggles already and apart from not able to adjust for eyesight I find them the better then the bino type Goggles. The controller probably be ok for me less buttons less confusion but unsure as I’ve tried to check but don’t think it will hook upto a SIM.

Would love to be under £200 as I want to first see if I like it and my field of depth vision is ok after I a bottle exploded in my left eye few years back.

This is in my basket atm, will this work can I get cheaper box goggles and transmitter able to use with sim.? Also confused about do I choose non LBT Version or a LBt? 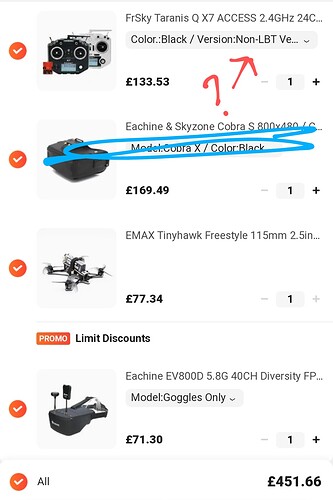 Be thanks in advance.

Check out this video from captain drone as well: 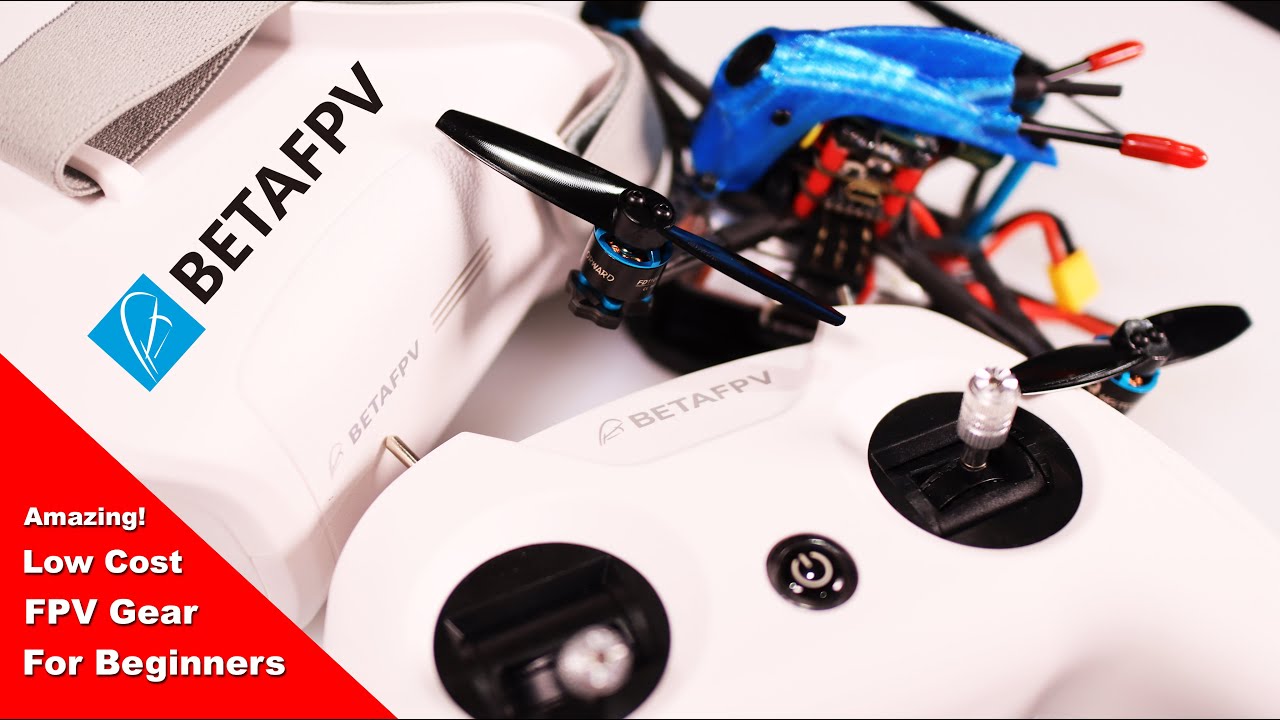 These might bring the price down and he also states that the radio can be used with a sim.

And if you haven’t ever flown an FPV quad then I would strongly recommend trying a sim first of all as it is a lot harder than it looks.

Check out this thread as well FPV: My Experience and kit list (with links)

It’s my experience starting out in the hobby. There are links to the kit that I’ve purchased and most of it I’m still using. Hope this helps.

For goggles I can recommend these, box goggles don’t look as cool, but you can wear glasses under them. I wear reading glasses which make everything crispy…, 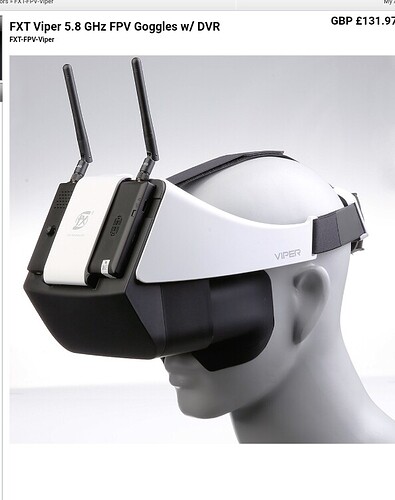 Oh, and get used to soldering!

Thank @DeanoG60 my house is not designed for any flying as wife has so many glass ornaments that my life would not be worth living if I smashed any. Will look at link thanks much appreciated detailed advice

and get used to soldering

Hoping nobody say that. Thanks @tom.at.rye

The QX7 was a nice radio but FrSky are starting to screw things up and make things difficult, especially for the first time buyer. I would have suggested something like a Radiomaster TX16S but that might over complicate things for a first time user. I have a few members in my RC club whom are migrating from Spektrum and Futaba radios to the TX16S and I’ve found myself acting as Tech Support.

Very recently Jumper have released a new budget, but feature rich, controller for under £50. 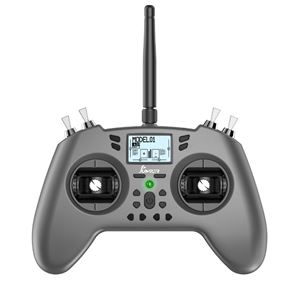 The Jumper T-Lite is a game console style controller for RC Models. This model features a 4in1 multiprotocol module.

I must admit I’m not 100% sure of the spec as Joshua Bardwell has just reviewed this and says it can only handle Futaba and FrSky (LBT and Non-LBT), but Hobbyrc above are advertising it as having the full 4in1 multi-protocol system (over 50 different radio types).

I think this would make an ideal inexpensive first radio, and I believe it connects to a simulator via USB. With it being less cluttered than the bigger radios I think it will also be a good introduction to the OpenTX universe. If you find that FPV is for you you’ll be able to progress to the bigger radios with your newfound OpenTX knowledge, and the Jumper will serve as a great backup. If you find it’s not for you the Jumper will sell easily and you’ll not have spent more than you may do on a night out.

The choice of quad, the Tinyhawk Freestyle, I think is a good one. You can start by flying on just 1S (single battery) to find your feet and acquaint yourself with the experience. As you gain confidence you can then add the second battery and fly like you stole it. On 2S, and behind the goggles, the THFS feels like a much bigger precise 5inch quad, so moving up to something like this at a later date will be easy as falling off a bike.

And lastly, keep asking questions. The FPV gang in this forum are a very experienced and enthusiastic crowd whom are only too happy to help.

These are brilliant goggles for the price. A massive screen and decent range.
However, if you need reading glasses, the image may look blurry unless you print (or ask myself or someone here to print) a spacer between the detachable screen and the face mask.
It is possible to jam specs into them, but awkward.

These are much cheaper, but the range may be less. Which wont be a problem unless you’re going past 500m, which I doubt you controller would go anyway.

Would they all work together??? plus also happy about is simulator as I know i have alot of practice to do.

Space wise I’ve plenty of it apart from the nagging wife and the donkeys and avoid the river I should be fine, open space first then be a wee devil and bounce it through trees lol.

Big thanks I was awake until 4am up at 7am

so tinygo in basket and was just hesitating, but if the combination above works fantastic I order that.

The goggles will work with any fpv. They are pretty generic. But if you want to record onto an sd card, you might have to get the 800d. Check.
I’ve not heard of the controller, but if Nidge says its good, that’s good enough for me.

but if Nidge says its good, that’s good enough for me.

Whoa now! Settle down. I was on holiday at the time I never said that😉

I was going by what the erstwhile Mr Bardwell thought of the TX. He’s one of only about three or four YT peeps I trust as far as reviews go as he’s not a Chinese Box Shifter Shill, and just like Bruce S he’s brutally honest when it comes to gear reviews. He is quite critical of this TX but when you stack it against other TX’s of a similar form factor, TBS Tango and FrSky X-Lite (which doesn’t play nice with third party receivers), both of which are over three times the price, it’s not a bad little radio to start with. However Radiomaster are touted to be releasing their version of this radio, and just as the TX16S was better and cheaper than the equivalent Jumper radio, this new release will probably be no different.

if Nidge says its good, that’s good enough for me.

also chose the 800d for SD card option, I presume I buy the Pal version as I never realised this until checking card option available or not.

Whoa now! Settle down. I was on holiday at the time I never said that😉

plus batteries, thought I have trouble with batteries as everywhere else declined to ship to Northern Ireland but spoke to Mike from hobbyrc and says no problems.

or is the 2S different design of battery with connections.

Thanks it’s frustrating at times

Have few soldering irons so if these magnifiers work i will start practicing on old mother boards.

If we’re still talking about the Tinyhawk Freestyle it comes with two 450mAh Emax branded 1S batteries. I use the GNB 520mAh batteries with mine. I haven’t tried the larger 650 but even though they’re slightly more capacity I think the flight times will be less as they are slightly heavier and their C rating is less. In numerical terms:

Yep, but that’s if you have faith in the published C ratings
I’d not see a difference in these two

Yep, but that’s if you have faith in the published C ratings
I’d not see a difference in these two

I agree. In real world settings there’s next to nothing in it. The only other consideration I’d take into consideration is the physical size difference between the 520mAh and 650mAh. The 520mAh just fit the top plate of the THFS, the 650mAh may overhang. 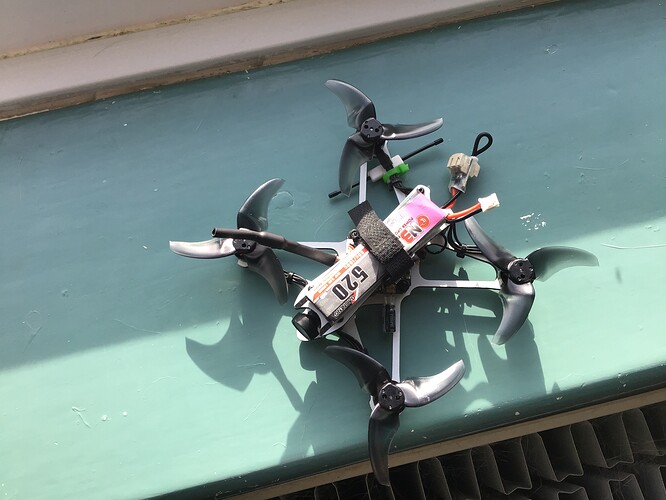 Thanks you for making it much simpler for me.

I only say this because the Emax tinyhawk freestyle 2 does not come with the little jumper pin to fly it on 1s so unless you can make your own you’ll be stuck flying on 2s.

Yes it will come 2x 1s 450mah batteries but to fly it using only 1 of them you’ll need a little jumper plug to plug into the spare socket. 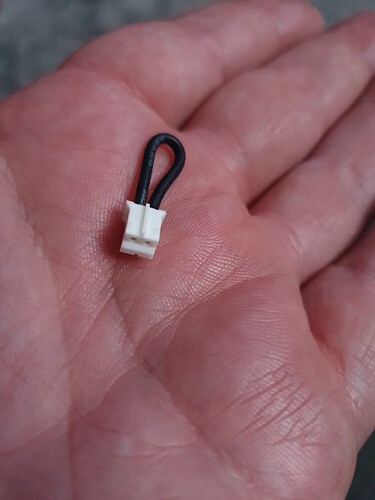 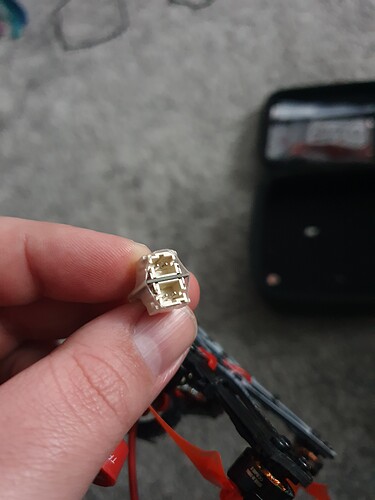 Jumper connected to the battery connector: 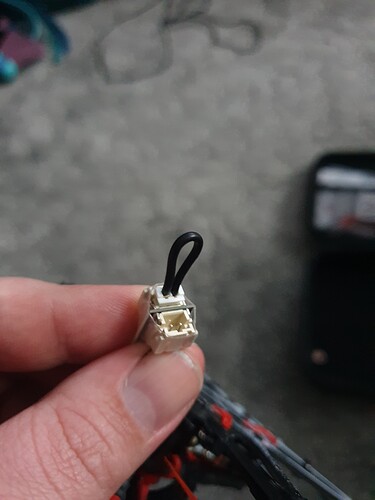 The Tinyhawk freestyle 2 doesn’t come with the jumper plug so to fly it you will need to plug in both 1s batteries making it 2s.

But the standard tinyhawk freestyle does come with the jumper plug.

does not come with the little jumper pin to fly it on 1s so unless you can make your own you’ll be stuck flying on 2s.

You can have mine

can I not make a jumper from one of the battery’s already by cutting connector off and solder it as seen in above pics.