Are there any Mac/Photoshop experts out there that can point me in the right direction?

I am struggling ATM with stitching the original photos from the Mini 2. I have tried AutoPano and PTGui trials and they work well BUT I have Photoshop CC and want to try and get that working.

Both the trials are far far quicker and more accurate than PS but they are watermarked and whilst paying for PS I can’t justify the extra monthly (for PTGui) for the difference in the 360 directly from the Drone. That said I have the high res photos and I want them to be usable if possible.

Thanks, I have looked at these.

My issue is that PS just doesn’t ‘seem to like’ the photos selected. I can use the same shots in the other two I have been using and get good results. With PS they do not stitch correctly. I’m guessing the image details aren’t being read as well in PS as they are in the dedicated stitching programs.

PS just doesn’t ‘seem to like’ the photos selected

I know nothing about the Mac, Keith, but Lightroom stitches much better than PS on the PC. It will stitch dng files as well.

Thanks, I have literally just downloaded LR to try.
I’ll update you in a minute, and I probably don’t know much more…Apples should be in cider in my mind but the hardware is (I don’t want to say this) far better than my Dell. Still learning the OS though.

Normally I use LRC to stitch 360s from my MP, but after others were having problems with the images from the Mini-2, I tried using it with their images … and can confirm that it doesn’t do a perfect job … for whatever reason … resulting in some pinching around the “direct down” point and, as a consequence, a curved horizon.

Being on Windows I’ve used ICE with the same images without any issues.

Pano Giga is the best you can get on Mac.

It was discontinued a few years ago when GoPro bought out Kolor.

Copies are available online, if you’re struggling to find one drop me a PM

Exactly what I’ve just discovered!
It’s ok on this one cuz I’m directly underneath it!
I still have the Dell, I may have to use it for the 360s, if I can get it back of off SWMBO. 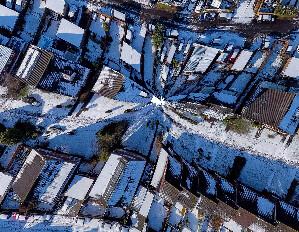 OR I have found Pucklechurch’s arse!

You could always run a Windows VM on the Mac for ICE.

I can read the words, I have tried rearranging them…NOPE.

Seriously, not something I have ever tried, running a dual boot Linux/XP machine was my peak in IT!

VMs are way easier than dual boot! … and safer, because screwing it up doesn’t screw up everything.

screwing it up doesn’t screw up everything.

You could always run a Windows VM on the Mac for ICE.

I run Windows 10 and Windows 7 using VMware Fusion on the Mac, but it does cost. Never tried Boot Camp but I believe that’s a free option.

OR I have found Pucklechurch’s arse!