Simple question really, would increasing the length of the control sticks give better/smoother control? This is on a mini2 by the way but the answer would be the same for any drone. I’m thinking along the line that if the length were doubled then you would have to move the stick twice as far, therefore giving better control. I’m planning on knocking up some different length extensions on my lathe this weekend to try but wondered if it was worth the effort. TIA 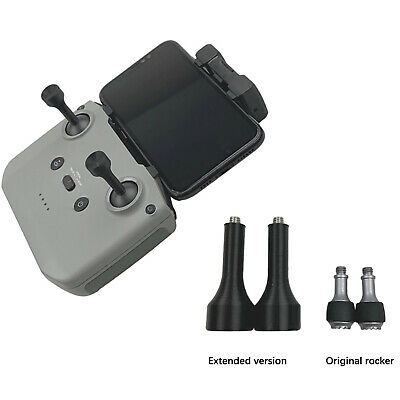 Have you changed the EXP settings?

There’s also this too:

POLL: How do you fly? Thumbs only? Fingers and thumbs?

Just a bit of fun and some idle curiosity… How do you fly?

Also worth a read

@firstadekit - The problem I had with sticks regardless of length - As a user of thumb-on-top control - is the fact that it is hard to keep them in the same place. Some folk who pinch the joysticks (thumb and pointy) tell of better control. With the rubber there to offer some good resistance, it is much easier to control AND carefully change your stick placement giving much smoother cont…

Yip thats what I’m thinking, although I think I just might be able to make them look a little nicer than those examples

Yip I have, I’m just a clumsy fat thumbed oaf!

Oddly enough, I was thinking the same recently and I printed these. They increase the stick length by 50% (16mm - 24mm). I haven’t really had chance to use them in anger yet though.

Thanks all for the replies. I can’t remember which link I read it from, there was a fait bit to read through, but I’ve done the opposite of my original intentions!!! I’ve removed the sticks completely and it’s transformed my flying immediately. I’m now using the whole pad of my thumbs on the domes and its so much smoother and easier.
Cheers

I have invested in some of these and love them, once you get used to the fact that the sticks may not auto-centre, but they are longer and the rubber/silicon collar provides some good resistance, resulting in smoother control. 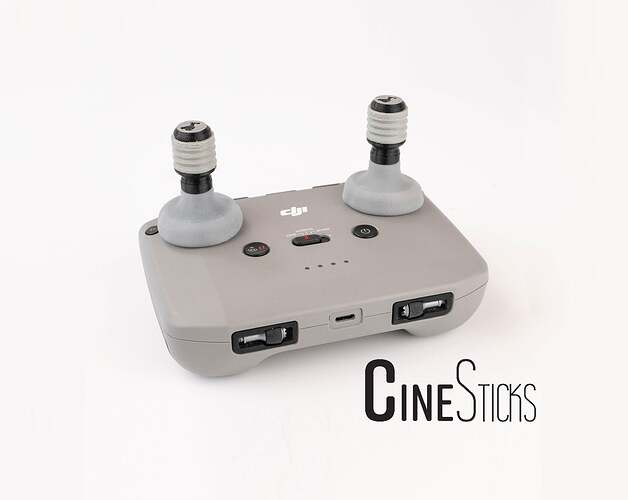 Introduction CineSticks are resistive joysticks that use a specialised design to give you the smooth control that standard little joysticks just aren't capable of. You'll be able to achieve those cinematic movements such as pans, dollies, tilts...

Postage from Australia is really quick too!

Pinch the sticks between your thumb and index finger. It takes a while to get used to but then you will have a lot more control over movement.

For me, shorter sticks would make more sense for control at slow speed. The longer sticks are taking you away from the centre of the control so the larger/exaggerated the movement will be.

I have been flying with no control sticks just using my thumbs on the holes and i find the control to be a lot smother at slow speed.

For me, shorter sticks would make more sense for control at slow speed. The longer sticks are taking you away from the centre of the control so the larger/exaggerated the movement will be.

Obviously whatever works for you, but the fact that longer sticks require more (“exaggerated”) movement to achieve the same angular input is exactly why it should give you more precise control.

For example, if your control stick is 60° “lock-to-lock” then a 20mm stick requires approximately 20mm of movement to go from one extreme to the other. A 5mm stick gives you the same range of input in a quarter of the distance. So if you need to change input by 5°, a 20mm stick would need 1.67mm of movement. To achieve the same change with a 5mm stick would be a 0.4mm movement.

Mathematically, longer sticks give you a greater margin of error in your movements, which should equate to finer control.

Mathematically, longer sticks give you a greater margin of error in your movements, which should equate to finer control.

If its more margin of error you want then you should be looking to change the thresholds of movement within the drone… u can do this in the control section under advanced. Although only for normal and sport mode.

Yes when using thumbs and no sticks it is a small amount of movements but as soon as u feel that movements the drone moves. I find i feel more connected this way. Appreicate what ur saying tho. That dead space will increase with longer sticks

Hope you find something that works for you mate. All the best

Pinch the sticks between your thumb and index finger.

On some RC’s that doesn’t leave your forefinger free to use the C! / C2 buttons and adjustment wheels.

I have tried the pinch method, it just doesn’t work for me I’m afraid. It feels clunky to me and as OzoneVibe says it doesnt leave fingers free for other important things.
I will continue without the sticks, it seems to be working well for me and giving me much greater control and feel than I had before. I might try longer or shorter sticks in the future but for now I’m all good