Hi just wondering if any meets around Bournemouth or Christchurch.

The topic title has been edited - this post relates : Topic titles and replies to existing topics

Good question! There are a fair number of members in the BCP area by the look of it.

I’ve not met anyone from GADC yet, but would be up for seeing what we can do.

I have been flying a couple of times with a friend, and when we went out on Sunday, we were ‘joined’ by a higher altitude mystery Mavic being flown by someone nearby.

Where was this you were flying. 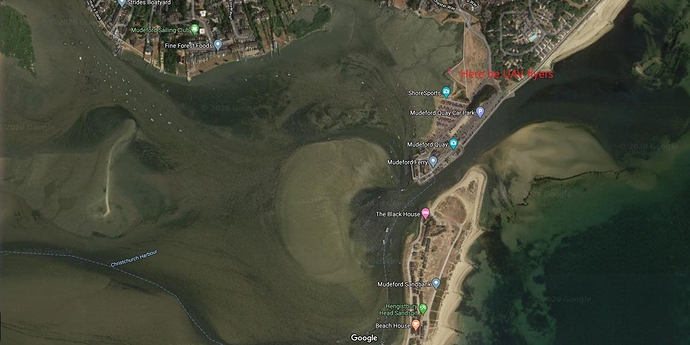 I posted some pics on this thread

Hi, Phil here living in the Christchurch side of Southbourne, it wasn’t me with the mystery Mavic though. I have flown from the top of Hengistbury Head in the Mudeford direction a few times, never had any complaints or unfriendly members of the public.

Yes it would be nice to get together, even if its just to chat and exchange ideas and maybe get a flight in, I’m reasonably flexible on time, so lets see if we can get together, maybe better to use private message to arrange things.

Look forward to hearing from any of you in this area.

Ahhh, not you @AprilCoon! I think it came from the Highcliffe end from what I could hear, but I wasn’t looking closely.

I was concentrating on keeping my MP in the air and not heading for the water! I lost my Cree Strobon in the crash, so need to watch the red and green lights on the MP carefully when it is in front of something dark. Definite VLOS concentration involved.

I wondered about Iford playing fields early or late as a possible location.

Sorry for the late reply but working, Iford sounds good if you would like to meet up let me know Sunday’s are good for me.

Hi Phil that’s sounds great,Sunday’s are always good for me just let me know if this fits with you many thanks Mark.

I went down to Iford playing fields this afternoon, there were very few people there, so decided to fly from in the middle of the field, not the rugby field but the part the other side of the rugby field. I had no plans in particular so just practiced flying and turning without losing or gaining height. Looking back at the video I realised I was turning wat to fast so need to be much more gently with the yaw, I am not sure if it is possible to reduce the sensitivity of the yaw.

I then had a go at active tracking, set it up and drove around on my mobility scooter around and after a short time a dog came running over barking and jumping up at the drone, it was at about 6m so no chance of it catching the drone. I stopped and just let it hover. Then a lady with a bright pink short sleeved shirt came over towards me, I thought I was going to get it in the neck but quite the opposite, she asked about the drone, I said I was doing the active tracking, so she said go take the dog for a walk, she was quite happy for the dog to tear around chasing the drone. The battery was running out so asked her to hold the dog while I landed, once it was on the ground and the props stopped the dog lost interest completely.

The lady told me of a drone flight she had seen on Facebook of a guy who took off from his garden and flew out over the beach, I told her that the flight was completely against the regulations, so I explained a litttle about the regulations and registration with the CAA. She thought it was a bit petty that people flew over where people were.

I might put up a few short videos later but not going to get round to it tonight. So I can add Iford playing fields to the map, it is in Class D air space so need to fly with caution.

it is in Class D air space so need to fly with caution.

Half the country is