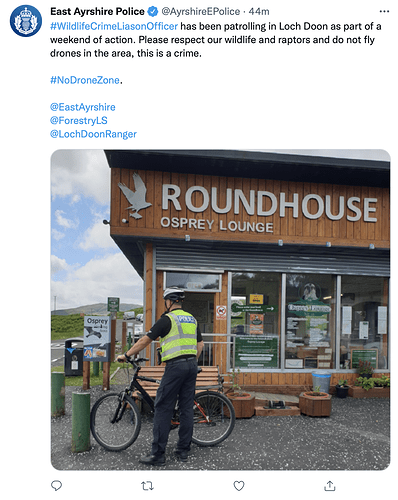 This coming after the 2020 South Ayrshire “No Drone Zone” campaign.

I don’t disagree with protecting the Osprey, not in the slightest… but this seems like overreach.

Let’s see what they’ve to say…

“#WildlifeCrimeLiasonOfficer [sic] has been patrolling in Loch Doon as part of a weekend of action. Please respect our wildlife and raptors and do not fly drones in the area, this is a crime. #NoDroneZone”

(I have provided a screenshot of this tweet with this letter).

I entirely agree that all wildlife, particularly species under classification A1, should be respected and protected and I wouldn’t dream of flying my drones in a manner likely to cause them harm or distress. However, could you please expand on the “this is a crime” and “#NoDroneZone” portion of the above? On what legislation is this statement based?

The obvious candidate would be airspace restrictions. I would like to think that all responsible drone pilots check the airspace classifications in an area before flying. I have just done so for Loch Doon and, according to the CAA, there are no restrictions – either permanent or temporary via NOTAMs – in place which would prevent the legal operation of a drone. The closest such restriction is the FRZ for Prestwick Airport, some 23km to the north.

There are, clearly, other considerations when planning a safe and legal flight. Local byelaws, for example, can restrict the use of drones beyond airspace restrictions implemented through the CAA. The East Ayrshire Council website holds no information relating to the use of drones in the area, certainly nothing regarding any byelaws. If there is a byelaw in place prohibiting drone flights in the Loch Doon area, could you provide me with the details and, perhaps, advise where this is published so that I can be sure any flights I undertake are legal?

Another consideration when flying a drone, particularly with regards to Loch Doon, is, as the tweet above suggests, the protection of wildlife. It is a criminal offense under the Wildlife and Countryside Act 1981 to “intentionally or recklessly” disturb the nests of wild birds or to “intentionally or recklessly” harass any species in Schedule 1A. This is right and proper, and the crimes seen across Scotland against raptors, particularly with regards the management of shooting estates, are abhorrent. But is this the legislation with which the entirety of the Loch Doon area has been designated as a ‘#NoDroneZone’?

If that is the case, it would seem to be an interpretation of the law which many people would find to be an overreach. Ospreys have been known to hunt as far as 20km from their nest site, which means that a person could fly their drone within the radius of that hunting ground and still be 40km from the nearest Osprey. Are they, at that time, “intentionally or recklessly” harassing the bird? I would argue that they clearly are not, and if they are not then what crime has been committed?

As I say, I wouldn’t dream of causing distress to any animal, and am entirely in favour of measures to protect wildlife, including from drones. But the use of drones, and the legislation governing that use, is widely misunderstood by the general public. This confusion would not be helped if the police were seen to be misrepresenting that legislation.

Perhaps a better approach would be to implement an official restriction on the airspace via the CAA? This would inform the vast majority of drone pilots not to fly in the area without having to rely on them seeing a sign when they arrived or having stumbled upon a Tweet one Saturday morning.

I look forward to your reply on this matter.

The “is a crime” part, I’m guessing they’re referring to the disturbance of wildlife in general and nothing to do with drones/airspace?

Is that a crime?

It’s certainly a legal area if a drone is flown over a nature reserve and SSSIs without the proper permissions.

Hadn’t thought of SSIS. Loch Doon is, it turns out, a SSSI… because of a rare type of fish that breeds there, not the Osprey.

This thread has a good discussion of SSSI’s Basically, it depends …

Seems the legality depends on the particular requirements of the individual SSSI, which are here:

SiteLink is Scotland’s register of European sites under Regulation 11 of the Conservation (Natural Habitats, &c.) Regulations 1994. SiteLink provides access to data and information on key Protected Areas across Scotland. You can view site boundaries,...

Only bit of that that might apply to drones is the SOAC… which itself is murky:

Ok seeing as you north of winter fell Do they have a different organisation to the CAA? Use that as your starting point and don’t let your dog abuse the sheep when it’s flying a drone​:rofl:

Haven’t posted the letter yet (because, of course, Police Scotland don’t do emails from Joe Public), so might have another crack at it to ask if they’re using the SSSI and, if they are, whether that’s an official Police Scotland stance on the SOAC.

Take a look at the Wildlife and Countryside Act 1981. I’m sure there’s amendments in there covering drones and SSSI’s etc.

Pretty sure the legislation governing SSSIs in Scotland is now governed by the Nature Conservation (Scotland) Act 2004. Don’t see anything in there about drones (or vehicles at all), just references back to the Operations Requiring Consent, which then leads us back to the SOAC.

Who knows, this might even answer the SSSI debate

Letter is updated and printed, so just a wait now to see what Police Scotland pick as their reason.

Even SSSIs and similar sites like AONB etc. need a byelaw to prevent TOAL from them, though there are model byelaw templates which DEFRA uses for SSSIs when it deems them necessary. These include UAS TOAL but not overflight as they’re carefully worded to not be taken as trying to regulate airspace. The byelaws are simply a means to enforce without having to rely on the wildlife and countryside act.

If the SSSI isn’t covered by a DEFRA model byelaw then they have to rely entirely on convicting under the wildlife and countryside act and without something like a bird carcass that has marks that look like they came from drone props it’s very difficult for them to secure that kind of conviction.

Obviously don’t take that as an invite to push the boundaries if there’s no UAS byelaw in place; fly well clear of nesting areas.

You could also put in an FOI request for information on how they came to the decision to declare the whole area a no drone zone, and their strategy to enforce it including specific legislation they intend to use. If they have a byelaw their information will include that.

Just had a fairly positive, helpful and pleasant call from Police Scotland on this.

The officer I spoke to had done a bit of research after reading my letter and had rightly concluded that there’s nothing (either airspace restrictions, bylaws or the SSSI status) that would make flying there an offence. The Tweet was, he said, trying to convey the issue with people flying drones around the raptors that are breeding on the loch (and it definitely is a not-drone-specific offence to disturb them or their nests), but he appreciates it’s badly worded and is going to feed back to the team responsible with some guidance. Can’t say fairer than that. We all know it can be hard to get things across in 280 characters.

He seemed genuinely interested in understanding a bit more about the hobby and we had a chat about some of the rules and how they’ve changed over recent years.

I didn’t mention it specifically, and neither did he, but I think we both came away in agreement that (bothering the raptors aside) Wheaton’s Law is the main one that applies when flying at Loch Doon.