after advice from more expierenced flyers, i had a jjrc x12 which when working properly was ok but mainly it was to unreliable until it finally flew off never to be seen again… so i`am looking to replace it but unsure which would better the better buy a used spark or new mini ? mainly going to use as travel drone

As someone who owns a Spark, and thinks it’s better than a Mini, I’d recommend the Mini.

DJI ceased production of the Spark about a year ago and it’s been over two years since there was any meaningful update for it. New batteries are getting harder to find and if you buy a used battery you’ll likely not know how hard the previous owner abused it.

The Spark has a significantly more durable airframe and copes much better in windy(ish) conditions due to its stronger motors. However the Spark has a realistic flight time of only 12mins/battery whereas the Mini’s is at least twice that. Also the Mini’s camera is an upgrade from that carried by the Spark, higher resolution and three axis mechanical gimbal compared to the two axis, plus electronic stabilisation, gimbal found on the Spark. The WiFi connection used on the Mini is significantly improved over that of the Spark.

thanks for the advice , i did think a new mini might be the way to go with a warranty against a used spark with no historu of it.

The WiFi connection used on the Mini is significantly improved over that of the Spark.

Much easier to hack the Spark to FCC though.

Much easier to hack the Spark to FCC though.

That is one of the reasons why I personally would not change my Spark for the Mini. My Spark is now permanently in FCC mode, along with no NFZ’s, and works with three different Global Positioning Satellite systems. However I’m sure, given time, some switched on person will find away to provide similar capabilities for the Mini.

other than a better range what other benefits of fcc hack? not that worried about going for km .

On WiFi drones, more power allows you to cut through all the interference in urban environments (which dramatically reduces range).

so i guess a stronger signal would mean less chance of fly aways? ( i dont need any more of those)

A stronger signal would mean less disconnects. Again, I’m talking in urban environments here, range won’t be an issue if you’re out in the sticks as you’ll lose LOS long before you lose signal.

Flyaways are rarely caused by a disconnect as most drones would simply return to their home / take off point (RTH) if the controller is disconnected for a period of time.

so i guess a stronger signal would mean less chance of fly aways? ( i dont need any more of those)

Probably the biggest cause of “flyaways” in GPS equipped drones would be a conflict in the data from the various sensors within the flight controller.

If the compass hasn’t been calibrated correctly a common symptom known as “toilet bowling” occurs. This is where the drone cannot maintain a stationary position but instead starts to move in ever increasing circles. This is when the data from the compass does not equate to the heading reported by the GPS receiver. If the discrepancy is great enough the action of the drone might be interpreted as a flyaway, causing the operator to panic and over compensate on the stick inputs, exacerbating the problem and thus giving the appearance of an uncontrollable flyaway.

On a GPS drone loss of control signal should trigger a failsafe whereby the drone initiates a return to home, or if in a short distance from the operator a simple auto landing. It has been hypothesised that if a home point has not been recorded prior to take off and the failsafe is triggered, the drone may choose to return to the last known home point, where ever that may be.

One issue that has been extensively reported with the respect to the Spark is a cascade failure. This is where the operator will be happily scooting about, more often than not in Sport mode. First a Yaw error will be reported. This could be due to the compass/IMU/GPS heading conflicts. Because of the repeated Yaw errors the FC will decide their is an issue with the Compass. Because the compass data has been reported as erroneous the GPS data will be classed as unreliable but reported as “Loss of GPS-Switching to ATTI mode”, when in actuality 12 or more Satellites are still locked. I’ve never been convinced that the Spark actually does a clean switch to ATTI mode in such a scenario, hence when such failures are reported it usually ends in tears. That’s one reason I’ve set my Spark up so I can manually switch to ATTI removing any input from the GPS and Compass.

An example of one of these failures is shown below.

*P.S. sorry for the waffle, once I get going I can’t stop, and I’ve lost all feeling below the knees 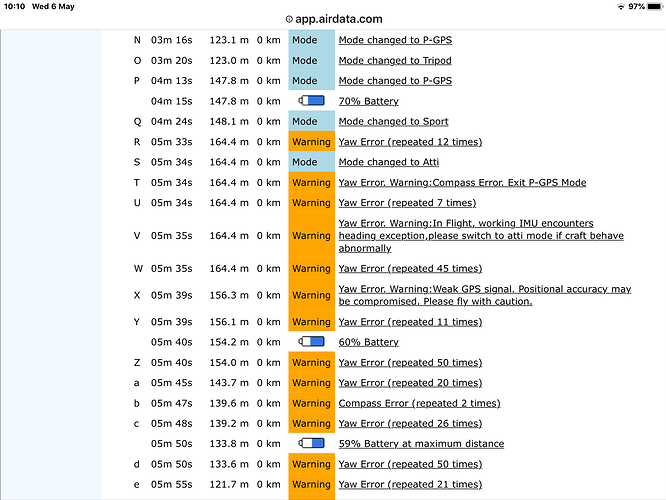 I’ve had the Spark and also the Mini for a short period of time and to be honest, both are very capable little drones which are great to keep in a rucksack. The mini has a number of newer smart features however the Spark for me was always a solid little drone.

when my x12 flew away, i had 15 mins trouble free flying , just having a last flight along the field when without any input it shot off to the left i tried to gain as much height as possible to clear the tree line but to no avil it went into a plantation of fir trees the wrong side of private property with secure fencing . thinking if i see a spark that looks right i may go for it if not then a new mini ( at least i no know there will be no crash damage ) thanks everyone let you what i end up with

after many hours of searching the internet i have decided on hubsan zino pro , good range ok battery life and good camera, for value for money i can get drone,controller , bag and 2 batterys for less than the mini. anybody have any expierence of the zino? before i order thanks

I have unfortunately crashed my spark and damaged it beyond repair. Is it worth replacing the spark or upgrading to the mavic mini.i mostly use the drone to take photos and
I do use the pano view on the spark but I hear the mini doesn’t have that function. So is it worth getting the mavic mini???

Just to clarify, the Mini has pano capability using Litchi or DroneLink

So the beta for the Mini has landed and I’m stuck on day shifts ;o( Thought I’d catch up on some YouTube before I get to have a proper play tomorrow, translate on the captions can be quite amusing. [Capture] It gets worse [Capture]

At this point in time, even though I consider the Spark superior to the Mini, is to go with the Mini. DJI ceased production of the Spark nearly two years ago including the batteries. This means that if you find new batteries for sale they will still have been sitting on a shelf for nearly two years.

You will probably be able to raise a fair chunk of cash toward a Mini by selling the batteries and reusable parts from your crashed Spark on eBay. I’ve seen used batteries selling on there for a sizeable percentage of the new price.