As we have been experiencing really lovely weather, and I being still a novice with very few hours of flight time, I decided to take the drone out to another beauty spot in the village of Clare. My idea was to capture (so to speak) Clare Castle to get a different perspective on this ancient monument. Clare Castle is situated in Clare Country Park. Before setting out, checked if there was any restrictions on Drone Scene and sure enough Clare Country Park is in the Yellow Zone which is understandable. At this time of the year, there are many people walking through the park with their children and dogs. As this was half past five in the morning, I gathered there wouldn’t be much of a risk from the general public maybe a dog walker or two. I set out heading towards the park. On arrival, there was no one to be seen. I walked from the car park to a spot ideally situated near the castle. The castle is situated on top of a large mound of earth. It must be at least 100 feet above the park. I set up the drone ready for the flight, checked the area again for any public, still no one about. I took off. Still getting use of the controls but a lot better than my earlier flights. Reached a height of about 200 feet and took some photos. I’m still hesitant taking the drone any higher, as it is at 200 feet I can just barely see it. Whilst at this height, I photographed the surrounding area capuring Clare Priory, it was then a chap walking his dog came over and informed me that I shouldn’t be flying a drone in this area. I apologised and said that I’ll bring it down and be on my way. He asked if I had a licence for it, on which I replied that it was under the specific weight and as far as I was aware didn’t need one. I could see he was getting a bit agitated, so I apologised again, landed the drone and made my way home. All this at ten past six in the morning.
Anyway hope you like the photos. They consist of two photos of the castle, one of Clare village and one of the Priory. 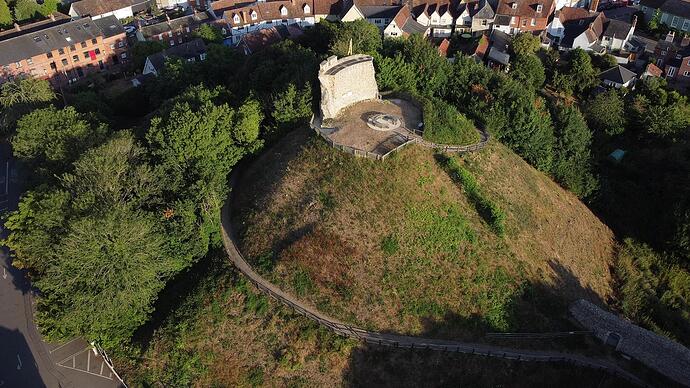 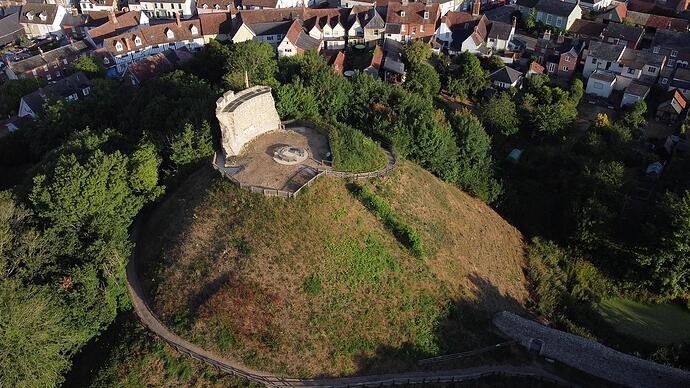 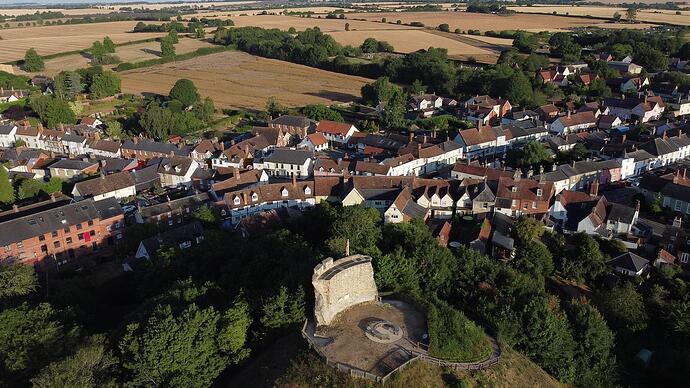 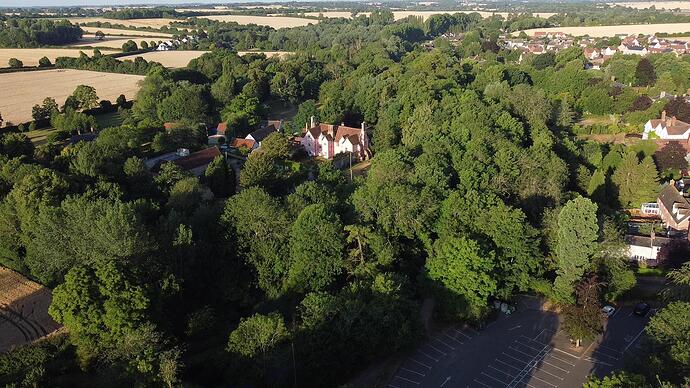 In my opinion you did the right thing aborting your flight and walking on, certainly can’t stop you flying your drone over the castle it’s just your TOAL point that might be restrictive , if you do some further research you will be better informed if this situation arises again ……don’t let it put you off

Looking on Dronescene you are well clear of the yellow zone. This is a warning area due to the glider club, it isn’t a restriction not to fly.

As long as you have your operator ID affixed to the drone you should be good to go as @sandbagger mentioned the specific site may restrict TOAL but I wouldn’t react unless it was an employee of the site. As your experience grows it’ll get easier, I’m yet to be challenged however if I knew I was in the right I would politely tell them to go away.

This morning I was flying in a flight restriction zone, this was an approved flight so I had everything printed with me in case I was challenged, a few people walked past me and none of them batted an eyelid but there will always be one who thinks they know everything. 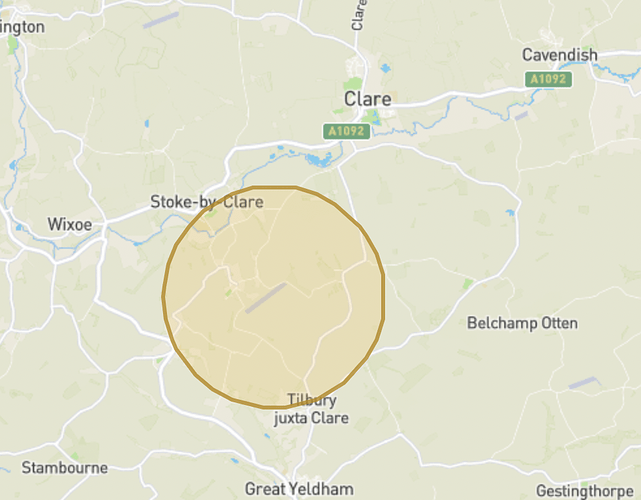 there will always be one who thinks they know everything.

@RocknRoll_Queen Your appetite for ‘confrontation’ will grow with experience.

Thank you all for your reassuring replies. No doubt this situation will arise again, as a novice at the moment I don’t want to upset too many people. It seems to me that the drone has an air of dread to some people, like showing a mobile phone to a person from medievil times and be branded as a heretic or a witch. Anyway I will persevere with my flying activities and deal with public in a polite manner.

I’ve been flying for less than a year and at the start I tried to hide so people couldn’t see me. Now I have spent so much time reading the rules and understanding them I actively make sure people can see me. I don’t go out of my to annoy people, but if I know I am in the right I’m quite happy to ignore anyone that wants to challenge me. It gets easier and less nerve racking the more flight time you put in.

As Markas pointed out, if you’re abiding by the CAA air and drone regulations, no one can stop you flying over the site so it’s down to a question of take off and landing (TOAL) permissions.

Many councils have encorporated no drone TOAL policies (most commonly grouped with and found under Model Aircraft sections) for public spaces that they own and/or manage. Parks and open spaces are often found under “Pleasure Grounds” byelaws which is an old name for parks.

A scan of their byelaws (https://www.clare-suffolk.co.uk/wp-content/uploads/2021/04/Clare-CP-Byelaws2305843009314942113.pdf) does not make any specific mention of model aircraft or drones, though interpretation of section 3a could be stretched to that effect: “3. No person shall in the Country Park: a) Ride or drive a mechanically propelled vehicle except on a vehicular right of way.”. There is no date on the document to know when these were enacted, though it’s likely before the new UK drone laws of Jan 2020.

None of this is legal advice, of course, and doesn’t mean these are the only applicable considerations (e.g. County Council may also have their own which may complement or supercede). My rule of thumb is to do my research, have any relevant documentation or byelaws bookmarked and on hand for discussion as needed, and be calmly prepared for conversation (probably after landing the drone) as needed.

But if you aren’t aware of any TOAL restrictions and are following the CAA rules and being sensible and conscientious (like it sounds like you were) then you also shouldn’t be afraid to fly.

Hi SecretFlyer.
Thank you for your reply.
I did some research before making my way to the site, I found the bylaw you mentioned with the section about mechanically propelled vehicles. I also contacted the Town Council by email the day before. Their responce time is up to 15 days. I decided to go anyway as it was very early in the morning. I wouldn’t have gone there at any other time as it would have been busy with the general public. Obviously I respect the individuals rights and wouldn’t purposely annoy anyone. Perhaps there isn’t any restrictions on TOAL in the car park, only in the park itself. The only problem is with the car park, it’s surrounded by trees, and as I’m still learning to fly I didn’t feel confident to take off from that position.

I believe the yellow zone @RocknRoll_Queen is referring to is the boundary for the Claire castle country park , which basically is just a warning that groups of people may gather so that location may have TOAL restrictions but otherwise he would be fine flying there , as the other members have stated this guy wasn’t an official so you didn’t need to engage with him and with more experience and knowledge under your belt you will have less confrontations I hope 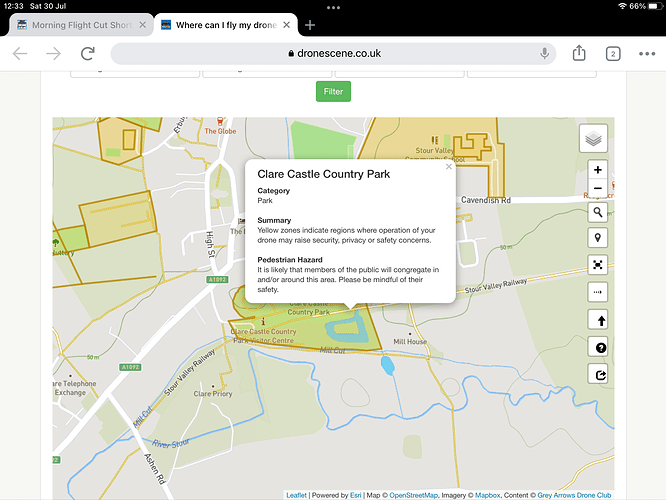 I have those layers turned off as I wouldn’t fly where there were crowds of people but not worried about overflight of areas where people may be with having the mini 3.

By the way @RocknRoll_Queen …you do require an operators ID and your drone does need to display this ….some people might refer to that as a licence

Hi Sandbagger.
Thank you for your replies.
I have an Operator ID, as the Mini SE is under the 250g weight, I didn’t apply for the Flyer ID. Should I apply for that as well?

You don’t need a flyer ID with the Mini 2, I have got one as I originally had a Mavic Pro but I have kept it up to date since owning the Mini’s, I think it is good practice to read through the rules and to take the test (albeit a basic one).

It may also help build your confidence in understanding the rules better.

You don’t ‘need’ it but the course will take you an hour or so to read as well as take the test. It will give you an understanding of the main drone code rules. It’s worth it, and its free, so why not!

@RocknRoll_Queen I’m just outside Norwich and am a Mini 2 flyer. Feel free to drop me a line if you need anything

If you want a way of building your confidence and a reason to get out and fly, you might want to take a look at the GADC Birthday Treasure Hunt. There’s still plenty of time left if you want to enter, and you could even win £200!

6 posts were merged into an existing topic: Where best to attach your CAA Operator ID label?

I am a new flyer too, and am always anxious whenever anyone is heading in my direction. I’m really glad to say that I have not had any negative comments from anyone.
Don’t let one “misery guts” spoil things for you

I’ll echo @rustybarnet Andy’s comment about the GADC Treasure hunt as an excuse to get out and fly and to boost your confidence. I’ve been out and about over the last week or so getting photos for the competition and I’ve been approached by passers by several times. Every single one of those encounters has been positive, with people simply being curious and wanting to ask questions. I’ll either not take off, hover nearby at a safe distance, or land the drone depending on how close they are. You can usually tell by how a person is approaching you how it’s going to go. The angry ones tend to stride up like they’re on a mission, the curious ones tend to watch the drone for a bit before coming over to say hello and ask their questions.