Basic Story
Planned a Litchi flight for my Mavic Air along a river: good line of sight available all the way, with a short cut back to the starting point over two car parks.

Yesterday
Flew at ~3pm, and the mission went exactly to plan. The weather was dull, and the pictures weren’t spectacular: 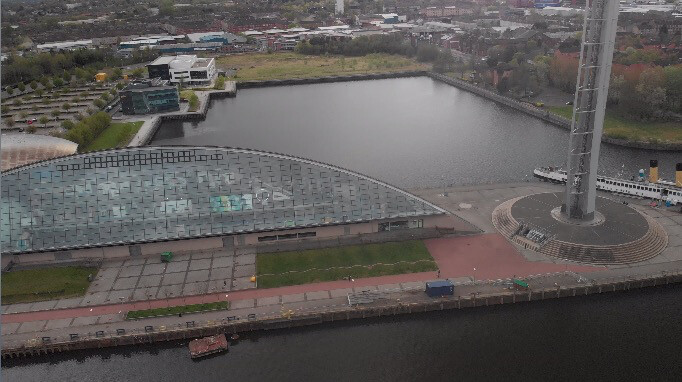 The sun popped out for a minute, so I used my second battery for another go at the same mission. However, the sun disappeared quickly, so disappointing results again: 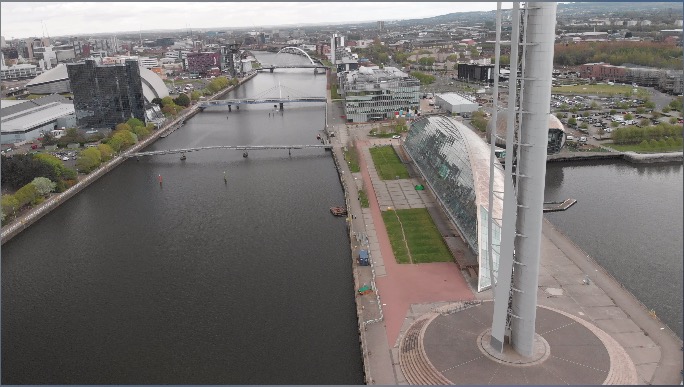 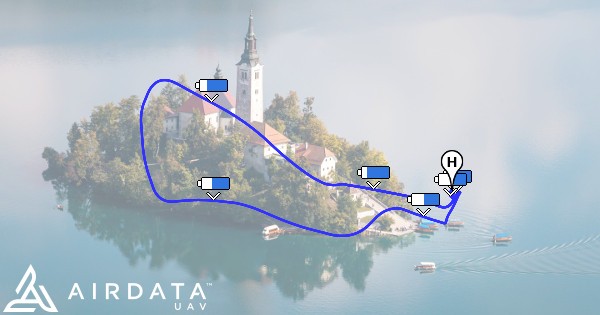 Today
Spotted the sun from my hotel room, and still had one battery left, so ran the same mission again.
This time things went badly wrong between Waypoints 14 and 15 - see 4K YouTube video: 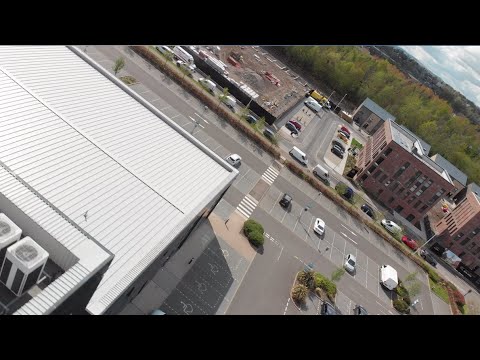 (I will leave this video up for a few days)

This was the scariest point: 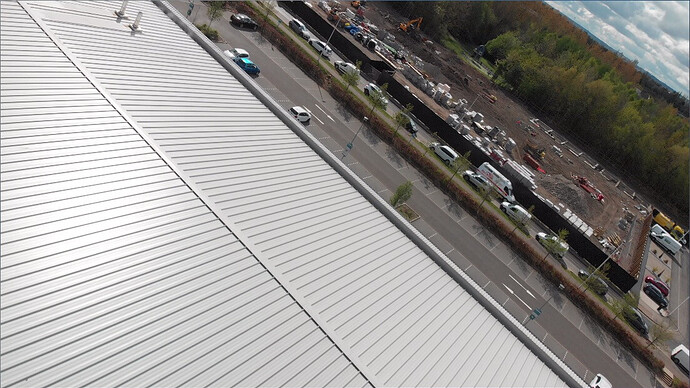 Analysis
I have looked at the flight record: 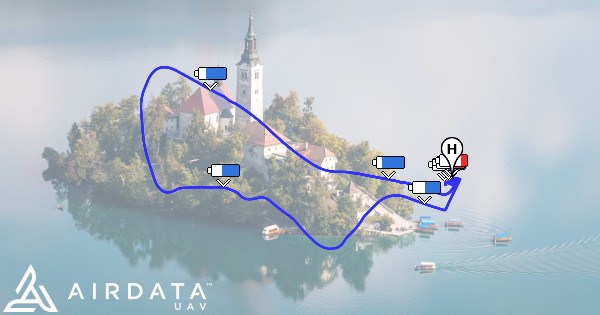 I may accidentally broken the Mavic Air speed record: 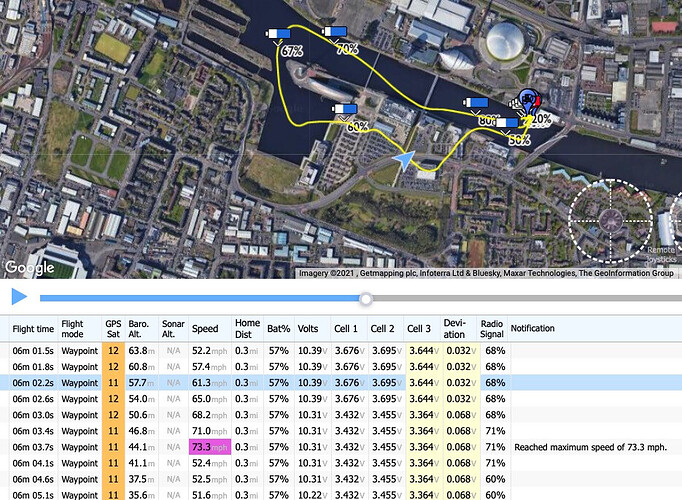 Other than that, the data tells me very little. The batteries seem fine, there are 13 satellites, and even when the flight was 70m lower than intended, it’s got 68% radio signal…

I have no idea how the death spiral was averted. To the best of my knowledge, I didn’t touch the sticks. I think a message came up on my screen, and I remember thinking from the view on the screen that I was far too low, but soon the familiar Mavic Air noise was heard above me.

Any idea what caused this?
Is it going to happen again?

Hit by a bird?

I had similar with my Mavic Air back in 2918. It was happily following a Litchi mission when it suddenly spun and recovered with the speed apparently reaching just over 100 mph. I have a suspicion that the local Royal Artillery base, who both operate drones and are involved in anti-drone measures were involved.

So my immediate thoughts in your case are some form of interference and I notice a couple of dishes on top of a building just before things kick-off. They may be receiving but the building is the Glasgow BBC studios so I suspect they may also be transmitters - in which case …

Wow, that’s a proper fill your pants moment right there

can’t imagine what was going through your head watching that happen.

Wow that was a close one! I would agree, some interference of some kind. Happy it recovered ok

Thanks everyone for your thoughts…

@Avianskipdiver : there’s no sign of birds at any point, and given the drone swings wildly, you would think that a wing or something would be visible. There certainly are birds seen in the film, however, so it’s possible…

@McSteamy2010 : strangely, there was no “pants filling”. I think I saw a message on my phone screen (possibly about a motor error), but by the time I could start worrying, I could hear the Third Twin was on its way home to me. However, watching the film has me more worried - too close to cars, people and buildings.

Close call that. Glad it got back to you ok.

Brown underwear moment indeed.
Glad to see that landed safely after this drama.

I offer up another hypothesis.

If we dismiss the RF interference, the dishes on the BBC operate in the Ku Band (12GHz to 20GHz) and are mainly used for receiving files for in-studio editing. Dismiss operator error as the drone was operating autonomously, then another possibility arises that the data from Litchi was somehow corrupted causing the drone to spazz out and later correct itself. This may have credence as Rob also experienced a very similar issue using Litchi for a Waypoint mission.

RF interference needs to be caused by one or more of the following.

There is another form of interference whereby the interfering signal induces unwanted current flow in the drones circuitry through close coupling, but in such a case the drone would need to be very, very close to the source of interference, e.g. within a few feet of a very high power transmitter.

Looking at the Airdata log there is a big current draw right around the point it went crazy. Could it be a physical issue with one of the motors maybe?

have you gone back to Litchi to verify it wasnt a bug their end? Thats where I would start…

Just wondering, if you put the Litchi flight into Google Earth as a Virtual Litchi Mission would it display any strange behaviour.

I’m not sure what the output of a Litchi mission is when uploaded to an aircraft but it loads in a couple of seconds, I doubt that it is that complex - probably a *.csv type list of waypoint values - speed, height, bearing, gimbal attitude. I don’t see that causing a mechanical malfunction.

Maybe someone could enlighten me as to what is sent from the Litchi program to the aircraft?

Whats the steamer there? Obv not the waverly as its off to get new boilers i think … looks like the old CalMac QM2 from the 70’s …

Again, thanks for the consideration that you have all given to my dilemma.

@TassyWass : Certainly by the time of the incident, the horizon was significantly askew. However, it looks normal enough at the beginning of the flight:

@Nidge : Agreed that radio interference is an unlikely cause. Thank you for the detailed technical analysis.

@SirGunner : Thank-you for the observation of the massive current draw - hadn’t seen that before - and for the suggestion of a possible motor error. I have spent this afternoon (i.e. three batteries worth) trying to get the motor to fail at 2.5m in the air, and it hasn’t. I eventually took it up to 100m in the local park and it just wasn’t failing.

@Gkinghrn : I”m not sure about going back to Litchi on this. The mission worked twice, and the third time I would have needed to deliberately unlock the mission before flying it, and then accidentally set an impossible waypoint. I don’t remember either of these things happening.

You raise an excellent point about insurance, and it’s about time I got some.

I am afraid that I am not certain of the name of the steamer, but agreed that it is not the Waverley, that features in the GoogleEarth simulation: 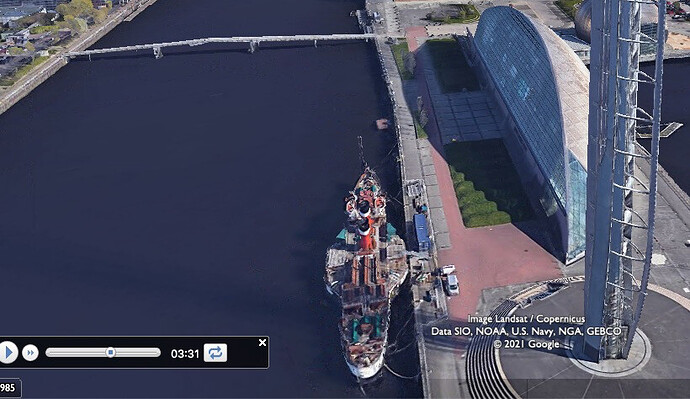 @macspite : I created the mission at home, and tested it on GoogleEarth using VLM before leaving for Glasgow. The film generated by the first two flights closely matches the virtual film created by GoogleEarth. The data “sent from the Litchi program to the aircraft” is why I am (was) still happy with the Mavic Air - no requirement for “virtual sticks”, and the aircraft always comes back even if the signal is dodgy. (To be fair, it came back this time as well… …but only just!)

Unless some other explanation comes up, I am going to build my confidence in this machine gradually, keeping it closer than usual. And I’m going to get that public liability insurance!

@macspite : I created the mission at home, and tested it on GoogleEarth using VLM before leaving for Glasgow. The film generated by the first two flights closely matches the virtual film created by GoogleEarth. The data “sent from the Litchi program to the aircraft” is why I am (was) still happy with the Mavic Air - no requirement for “virtual sticks”, and the aircraft always comes back even if the signal is dodgy. (To be fair, it came back this time as well… …but only just!)

I had the major twitch previously described back in September 2019 and no recurrence since. I had tested the flight in VLM and most of my subsequent, unevent full flights have beenLitchi controlled

And I’m going to get that public liability insurance!

What about compass interference, or something affected the Compass and or the IMU 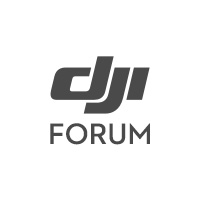 Compass errors. Why it happens

Many threads have been made in this and many other forums that have been the direct result of compass errors. These include flyaways uncontrollable flight lost drones and many more but many have gone unexplained and may or may not relate to this...