What do airlines mean by “spare batteries”?

I am flying with EasyJet to Glasgow soon, and looking at their policies it says “ Spare Lithium batteries Maximum of two spare batteries in carry-on baggage only. These batteries must be individually protected to prevent short circuits.”

As I have the Mini 2 with the flymore combo, I have 3 batteries…. Is that one in the drone and ‘two spare batteries’ I.e. can I take all three batteries?

Where it says in carry on baggage only , does that mean they can only be transported via your hand luggage ? I’ve never gone on a plane with a drone yet , or I’m guessing it’s hand luggage only due to what these batteries are capable of , so your only doing the cabin bag I take it .

Yes, you can’t check in batteries that are going in the hold, so they have to be in your ‘carry on’ luggage (my assumption is that if one goes rouge, there is more chance that it will be seen and dealt with appropriately).

Yea I get it , plus security is a lot more stricter these days , hopefully someone on here might advise or have the answer rather otherwise they’ll take anything over off you

As I have the Mini 2 with the flymore combo, I have 3 batteries…. Is that one in the drone and ‘two spare batteries’ I.e. can I take all three batteries?

I have a lipo bag that takes three and that is what I put through security.

The check is the airport and not the airline. However the airline might ask you if you are carrying any banned items.

The check is the airport and not the airline

My mistake that’s what I meant , my bad

That’s tight. International Restrictions less and adopted by other airlines. That said, they don’t screen the baggage. Airport Security does.

Something that @ianinlondon has recently posted a video about: 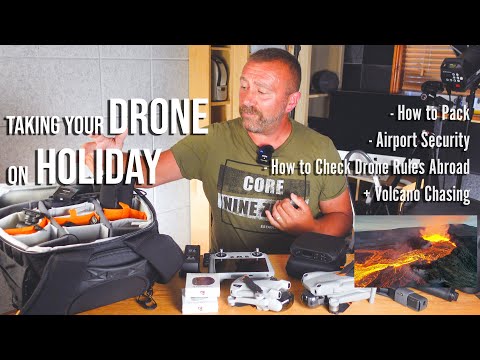 Thanks I had seen that from @ianinlondon, but it sadly doesn’t answer the specific question …. The loose terminology they use about “spare batteries” doesn’t make it clear (and I don’t want to have one confiscated)!

I do not attach a battery to the drone - so for me spare would be all the batteries.

If you attach one then spare would be the other 2.

I don’t know about EasyJet in particular, but usually, when there’s a 2-battery limit, you’ll find that that’s for batteries of 100-160 Wh, and there’s a much more generous limit, often 20, for batteries under 100 Wh, which all the small drone (i.e. not Inspire, Matrice, etc.) batteries easily qualify as. Are you sure that’s not the case here?

I wish I knew!
I can only read what it says on their web site, and it’s not at all clear!

I did look at the CAA guidance here

Items that are allowed in baggage | Civil Aviation Authority

Information for Passengers on Dangerous Goods

And that seems clearer, and implies there is actually no specific limit, and does not need airline approval.

Is it worth giving them a call @BudgieUK

I have tried, but gave up after waiting for 40 mins for an answer!

The limit is for batteries of between 100 and 160 watt hours. I have flown with a bag full of batteries for a GoPro camera on easyJet and other airlines.

Thanks …. It’s that “real world” experience that’s so useful.
I think I will give it a go, and have screen shots of the relevant regulations stored ready!

I have flown many times with batteries.

Well over fifty. Maybe a hundred.

I have never been questioned once on batteries anywhere in the world.

Don’t over think the issue.

Don’t call the airline as you will not get a correct answer. They will just guess. Phone another agent and you will get another answer.

Thank you …. I think I am decided that I will take all 3, with tape over the battery terminals just to be sure

I think it means just 2 but I could be wrong. Remember that if a CHARGED battery is left in the drone, or in the ‘charging’ position in the charger, the intelligent batteries cannot discharge themselves to a safe level. So either take them out or discharge to a safe/ storage limit first. Whether this applies to a plane, I don’t know.

Remember that if a CHARGED battery is left in the drone, or in the ‘charging’ position in the charger, the intelligent batteries cannot discharge themselves to a safe level.

That issue was fixed some time back with a Firmware update