Evening everyone
I would like to know if anyone has used Dronelink?
It looks quite good although a tad confusing…

Reimagine Drone Flight. Automate every drone from DJI, Parrot and PX4, even the Mavic Mini. Dronelink is an innovative flight app delivering the perfect shot every time.

First I’ve heard of it.

I’ve read the description and still not sure what it’s all about and confusing they refer to it as a flight controller.

“Dronelink works on the web, iOS, Android, and DJI monitors including the Smart Controller, CrystalSky, and P4P+. We designed a custom flight controller from the ground up in order to provide the best possible experience across all platforms. Not only does this avoid the limitations of using DJI’s onboard flight controller, but it also ensures identical results on all devices.”

I just cant imagine it will be as refined as litchi for much cheaper.

Hey everyone, I know it’s been a while since I’ve posted, but I’ve been heads-down working on my next project called Dronelink. Dronelink is an entirely new approach to flight automation, and we are looking for beta testers on iOS, Android, and the...

I tried it, and its most obvious comparator is Litchi. However, it has several significant differences:

It worked well for me, but I am not going to pay $100/year for any software. You can try its on-line programming module for free, and there is (effectively) a one-month risk-free trial for the app.

The CEO of the company developing Dronelink is a regular contributor to the thread, and says he is looking for a way to garner the amateur/enthusiast market, and will consider pricing in the future.

It’s a long thread (6 big pages), but it also gave me some insight into the world of software development and marketing.

The CEO of the company developing Dronelink

Dronelink is being built by the same guy that built Hangar / AutoPilot.

I am finding the softwares quite interesting. A tad confusing to begin with but quite accessible when you start experimenting with it. What I don’t get is the pricing. I am an amateur flyer, do I have to pay $100 Toby able to actually fly the drone?

I am an amateur flyer, do I have to pay $100 Toby able to actually fly the drone?

It looks like its free to plan, but costs to fly.

So far very impressed with the interface 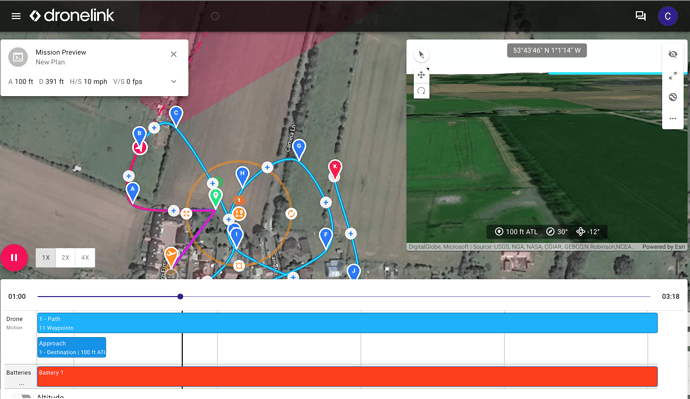 Yes and the way it visualises the flight is quite impressive

unlike the apparently stagnant Litchi

6 updates this year, very active social media groups, what more would you like from the software?

unlike the apparently stagnant Litchi

6 updates this year, very active social media groups, what more would you like from the software?

None of the updates have introduced significant new features or improved user interface.

With regard to “6 updates this year” - four of these are basically bug fixes and equipment support, and just one new feature (the rather doubtful “add a POI while a mission is in progress”). Yep, that’s stagnant.

I love Litchi, do not regret my purchase, and have recommended it to my flying colleagues. But, having owned it for six months only, I do not see the enthusiasm for development.

I do not see the enthusiasm for development.

Have you emailed the developers or partaken in any of the support groups?

Not a fan then @facherty

Have you emailed the developers or partaken in any of the support groups?

I have seen enthusiasm, and addressable criticisms, from users. What I have not seen is any response from the developers.
Have you seen any developments that I haven’t?

Not a fan then @facherty

As I said,
“I love Litchi, do not regret my purchase, and have recommended it to my flying colleagues.” I showed my liking for it in the only drone film I have published (youtube.com/watch?v=DXAHTNJ9704)

I was reacting to the excellent question, “what more would you like from the software?”, and give a reasoned answer. The implication that it is thriving cannot be right; it is “stagnant”, but perhaps it is not abandoned yet…

Have you seen any developments that I haven’t?

I’ve seen it develop over the years into the only really usable alternative to GO4.

My concerns with Dronelink lie purely with the developer’s previous strategies.

I loved Hangar and was a massive advocate of it (a search in here will show you that, I was even on the beta test programme), but and it’s 2 big buts, the dodgy giving up rights to your pictures sticks in the throat, and more importantly how he ditched Hangar with no notification, does not reply to support or general emails (or his social media feeds).

So that reason I won’t be giving him my money and I’m out.

Sounds to me Chris as if he/they are another Company who get a product to the market, take the punters money, then leaves it on the shelf with no improvements.

So that reason I won’t be giving him my money and I’m out.

As is also clear from my original post, I too will not be subscribing to Dronelink.

Just had an email, now free for non commercial users. Not read it properly I’m mobile

Think I’ll give it a try then.

How we use your information

We may disclose your information to protect the safety, rights,
property, or security of Dronelink, the Service, any third party, or the general public; to detect, prevent, or
otherwise address fraud, security, or technical issues; to prevent or stop activity which Dronelink, in its
sole discretion, may consider to be, or to pose a risk of being, an illegal, unethical, or legally actionable
activity; to use as evidence in litigation; and to enforce this Privacy Policy or our Customer Terms, User

We may disclose your information to comply with applicable legal or regulatory
obligations, including as part of a judicial proceeding; in response to a subpoena, warrant, court order, or
other legal process; or as part of an investigation or request, whether formal or informal, from law
enforcement or a government official.