For the past year or so I’ve been putting up with a gimbal problem on my M2P: it’s been off-centre by about 7º to the left. Calibrating it made no difference. It was just squint.

For photography that’s fine - line up the shot and press the button. Magic.

But it’s been a problem for video. If I lined up the shot using the screen (point the camera at whatever I wanted to fly towards) by the time I’d flown forwards ten or twenty feet the subject was way off axis. As for following a straight line, like a path or a road… forget it.

Temporary workaround was to manually adjust the gimbal. I got a big sheet of A3, measured the distance between the legs and draw a dead-straight line straight up the middle. I could use that to adjust the gimbal until it was definitely straight. Worked fine for ‘normal’ flights, but the minute I used any quick-shots it seemed to bin the adjustment until I put it back in normal mode.

I’d got a few quotes to fix this from various places (not DJI) but they all said that the age of the model meant the fix was to replace the whole gimbal, and that would come in at ~£500. Didn’t seem worth it. But after my success with getting DJI to look at my Mini3, I contacted them to see what they thought the could do for the Mavic 2. Success. They said they could just replace whatever part of the gimbal was faulty, possibly for as little as £10 plus parts. I boxed it up and sent it away.

I got it back today… except not. It’s a complete replacement (almost certainly a refurb), still for the quoted price. I can live with that.

Admittedly, I still need to try calibrating it since receiving it. But on the assumption that’s as successful as before, anybody got any suggestions of anything I’m missing here? Seems suspicious that it’s the same problem on the replacement as the one I sent off. Is there an obvious thing I’m doing wrong here? Anything that comes to mind with the M2P that causes this type of thing?

Which direction is it off in?

Have you adjusted the gimbal roll / offset settings in the app?

Tilted horizon? How to adjust the camera gimbal on a Mavic Mini, Mini 2 and Mavic Air 2 in the DJI Fly app General Drone Discussion

Further to a recent thread about gimbal calibration I thought I’d share where DJI are hiding the settings in their Fly app. If you’ve got a tilted horizon on your DJI Mavic Mini or Mavic Air 2 you can adjust the gimbal camera roll by going to: Settings > Control > Gimbal Calibration [image] Then rather than the default Auto option, you need to choose Manual on this next screen: [image] You’ll then be taken to a screen with two options. One to adjust the Horizontal and one to adjust th…

It’s been years since I used GO4 so can’t remember where it is without booting up drone.

I think Joe’s problem is a left/right pan issue, not an unlevel horizon.

My MP has always been a little off to the right - about 3 degrees. I’ve just lived with it.

It points off to the left, on both of them. I haven’t adjusted the gimbal on the replacement (was the first test-flight after getting it back today) - also, still need to calibrate it, just to be sure - but did go back in to the settings once I realised this one was off too, just to check that the old settings weren’t still in the app screwing it up. Nope, they’re back to zero on the ‘new’ drone.

Bit loath to just adjust the gimbal and live with it, because I was already doing that before throwing >£200 (with labour and shipping) at DJI to fix it.

I think Joe’s problem is a left/right pan issue, not the horizon.

Exactly that, yes. Pan problem. But you can manually adjust that in the same settings as Rich as pointed to.

My MP has always been a little off to the right - about 3 degrees. I’ve just lived with it.

That gives me a sinking feeling, given I’ve just handed over all that cash for DJI to ‘fix’ this.

At one point I dismantled all my gimbal assembly to see if there was a way to physically correct the angle. There wasn’t anything that I could find to achieve that.
I know the gimbal recalibration has never achieved anything.

Curiously, I did replace my gimbal at one point (for a reason I can’t recall) … and I’m certain the offset was still there afterwards.

The only time it REALLY annoyed me was when I wanted to fly a circle around a POI … and I had to remember to set it up making an allowance.

This post is the video from when I first discovered the problem.

I did replace my gimbal at one point

I might open up the one I removed and have a look in more detail. I might be more brave in my “poking about” when it’s not the one I want to use.

Curiously, I did replace my gimbal at one point (for a reason I can’t recall) … and I’m certain the offset was still there afterwards.

You’re making me worry that I’ve been conned by DJI on this ‘repair’. I’ll get it calibrated tomorrow and do another test flight once the thunderstorms have passed. If it’s still squint I might need to get some of that money back.

I’ll double check if mine is still off at an angle.

Only a few miles away from me … 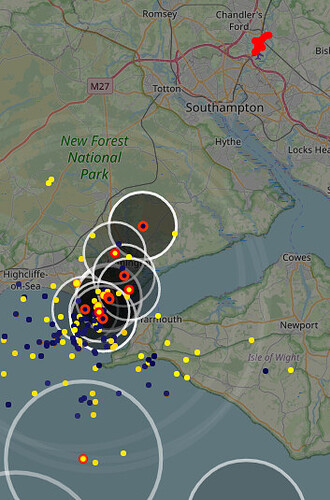 That’s the one - will be with me about noon tomorrow.

Hi I spoke too drone doctor about the same problem that being 2 degrees off centre ( MA2 ) , which I know is no where off like yours , they told me that dji set the gimbal to be 1 to 2 degrees max off centre at factory , there actual words was , I don’t know why they do it and that’s how they are and they did not no or have an explanation as to why they do this

Just in case you didn’t know this , Sorry if that’s no help hope you get it sorted

So, I wonder if I’m misjudging how off-centre the replacement is and it’s not as bad as the old one, just not straight. That would be something, I guess. At least I won’t feel so ripped off.

I noticed mine when I was looking at it one day head on , when I was toggling with the controller to recenter gimbal it came up 2% degrees off too the right , so I double tapped to centre it again then 1% degrees off , so I calibrated the gimbal and it was still off

, I then did it manually and got it to 0% degrees or centre , so I double tapped toggled again kept going off degrees again , I did have a screen recording of it but I’ve deleted it a while ago after drone doctors put me out my misery and told me this is normal , factory default or whatever , at the time I was not a member of GADC but used to scour another website , I see many stories of gimbal being off centre , I do get things a little wrong sometimes as I’m still learning but this that I have just said is 101% accurate , the only thing I will say is that I was told a couple of degrees and reading your post it’s a bit more , I know all the guys on here know there stuff 100% but if you cant find an answer sooner maybe to put your mind at rest a bit put it in on google or YT you might find out a bit more there too , I know what your saying tho I’ve got bad ocd and things do my head in

, have a look see what you come up with it is out there ( the gimbal off centre ) thing good luck all the best

This has been covered before

Tilted horizon? How to adjust the camera gimbal on a Mavic Mini, Mini 2 and Mavic Air 2 in the DJI Fly app General Drone Discussion

Further to a recent thread about gimbal calibration I thought I’d share where DJI are hiding the settings in their Fly app. If you’ve got a tilted horizon on your DJI Mavic Mini or Mavic Air 2 you can adjust the gimbal camera roll by going to: Settings > Control > Gimbal Calibration [image] Then rather than the default Auto option, you need to choose Manual on this next screen: [image] You’ll then be taken to a screen with two options. One to adjust the Horizontal and one to adjust th…

I think the guy is saying it’s off about 7 degrees wayne , would that be normal to your knowledge do you know

I would do an IMU cal, a compass cal and then a gimbal cal

I’ll double check if mine is still off at an angle.

Hmmm … only indoors and looking along the gap in the floorboards (in a room being renovated) … but that’s looking quite central / straight. 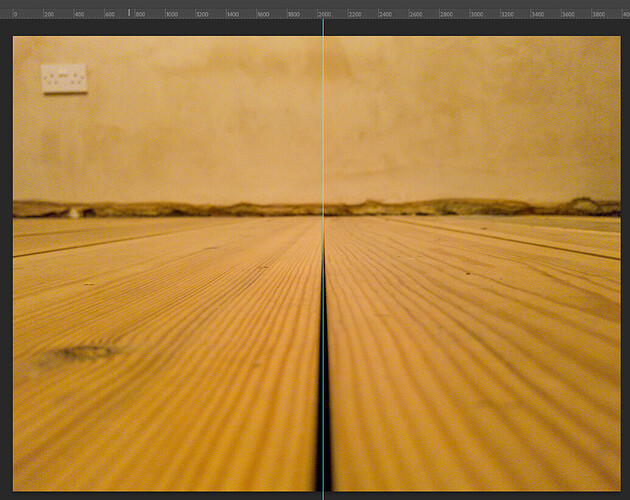 (That’s a screenshot of the image in PS - the vertical line being a PS guide dragged into position, so a perfect vertical relative to the image.

Before even turning on the MP, I measured the distance between the front and rear legs and centred each pair on the gap in the floorboards. Then I realised the camera isn’t dead centre, and realigned the drone 0.5 cm to the right of centre to allow for that - keeping it square.

Turned the MP on, and all I then did was tilt the camera down slightly and took the pic.

Had I thought about it, I’d have used my rotary laser levels shining on the wall. I may do that, tomorrow.

But - it’s looking OK … but I will get out and fly a POI circle somewhere, as soon as I can (busy as eff, atm) and see if that’s now correct. I’m hopeful.

The plot thickens. Calibrated the gimbal (level surface) and it was then off centre in the opposite direction.

My (quick and dirty) equivalent of Dave’s floorboards: 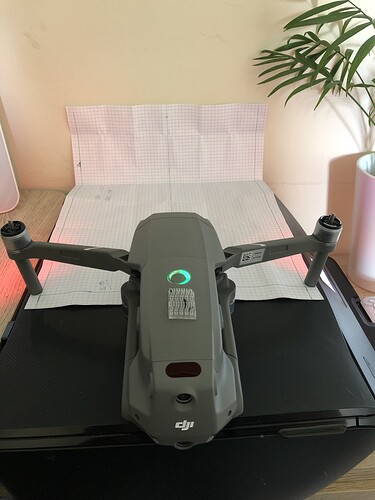 Excuse the folds. In hindsight, folding it up and sticking it in the case with the M2P was probably not the best idea.

After then manually adjusting yaw on the gimbal:

It is less off (by at least half) than the one I sent to DJI for repair, so I’m starting to think you’ve all hit the nail on the head with this just being within the accepted margin for error with their calibration. Still, that is quite a margin for error - makes it (without manual adjustment) very difficult to get some video shots which should be fairly simple.